Marry Me and I Want You Back are both pretty middling. 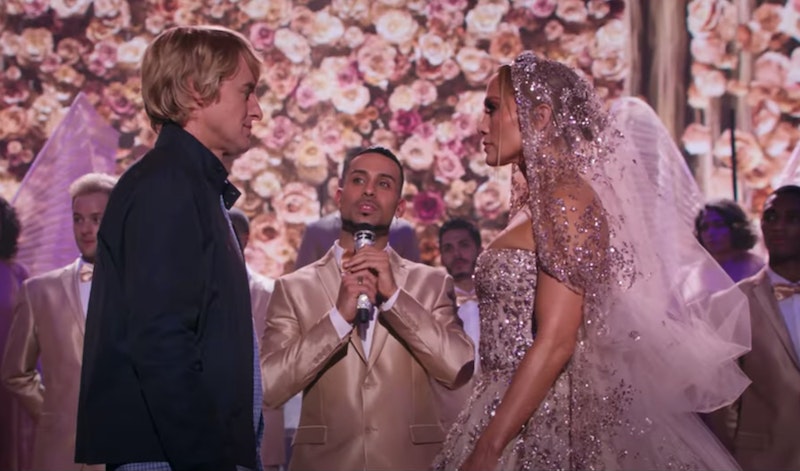 The premise of Marry Me, arriving Friday both in theaters and on Peacock, could’ve been that of a studio comedy in the mid-1990s, if not for the near-constant Instagram references. In fact, since it's about the relationship between a famous woman and a not-at-all famous man, it's really a riff on Notting Hill. The concept is completely ridiculous but sort of charming: Lopez is Kat Valdez, a J.Lo-like pop star, including the extensive history of high-profile marriages. Hot off a new single called "Marry Me," Kat is scheduled to marry her singer boyfriend (Maluma) live in concert, but catches him cheating backstage. So she impulsive decides to point at a random man in the audience named Charlie (Owen Wilson), there with his teen daughter, and marry him instead.

The two decide to keep the coupling going as a sham marriage, in front of the tabloid and social media cameras—she, the global superstar, and he, the mild-mannered single-dad math teacher. But there are no surprises. It's not a great sign that Marry Me has been sitting on the shelf for so long that when it finished filming, the streaming service it's premiering on hadn't even launched yet. Filmed entirely pre-pandemic in late-2019, the film was conceived to capitalize on Lopez's movie star resurgence from Hustlers, which arrived earlier that year. It's also meant to re-establish Lopez's music bona fides, as the movie stops in its tracks five or six times for full musical numbers, which serve to push the running time to nearly the two-hour mark. Thankless supporting roles are held by John Bradley and Sarah Silverman as the leads' respective sidekicks, and the soulless automaton that is Jimmy Fallon, as himself.

Wilson and Lopez are cute together, and it's refreshing to see a rom-com with stars of a certain age (he's 53, she's 52) without their age serving as the main premise of the movie. But beyond that, there isn't much to recommend here.

This week's other rom-com debut is another in which the successful chemistry of the leads is weighed against most of its other elements. I Want You Back is full of cliches, complex plotting, and shots that are strategically assembled to maximize the value of the Georgia film tax credit. Debuting Friday on Amazon Prime, I Want You Back stars Charlie Day and Jenny Slate as Peter and Emma, a pair of sad sacks who, early on, are dumped by their respective longtime significant others (Gina Rodriguez and Scott Eastwood).

Seeking to win their lovers back, the platonic pair make a secret pact to help one another—Peter by secretly befriending Emma's ex and trying to cause strife with his girlfriend, and Emma by infiltrating a middle school production of Little Shop of Horrors, directed by Peter's ex's new beau (Manny Jacinto, from The Good Place). It ends exactly where you think, but in the meantime we get a lot of complex entanglements that mostly aren’t worth the trouble, including a threesome scene. One lengthy set piece exists solely to shoehorn in a cameo by Pete Davidson. (The director, Jason Orley, also made Davidson's Hulu movie Big Time Adolescence.)

A couple of things go largely unremarked upon: That the exes seem like kind, honest and admirable people, while the heroes of the movie are duplicitous liars. The best part of the film, by far, is the Little Shop scene, in which Slate has to fake an interest in theater and belts out a solo. It's so good I was willing to forgive the part where Slate's single adult character just waltzes unencumbered into a middle school, the sort of thing that, even pre-COVID, wasn’t allowed to happen.

I Want You Back was written by Isaac Aptaker and Elizabeth Berger, the current showrunners of This is Us. Yet instead of that the show's tear-jerker ethos, this film’s more about complex romantic shenanigans, in the process showing off many of the finer sites in Atlanta and Savannah. Charlie Day and Jenny Slate are appealing performers whose movie star runs appeared petered out, so it’s good to see them together in a movie, even if “romantic lead” isn’t the most natural role that comes to mind for Day.