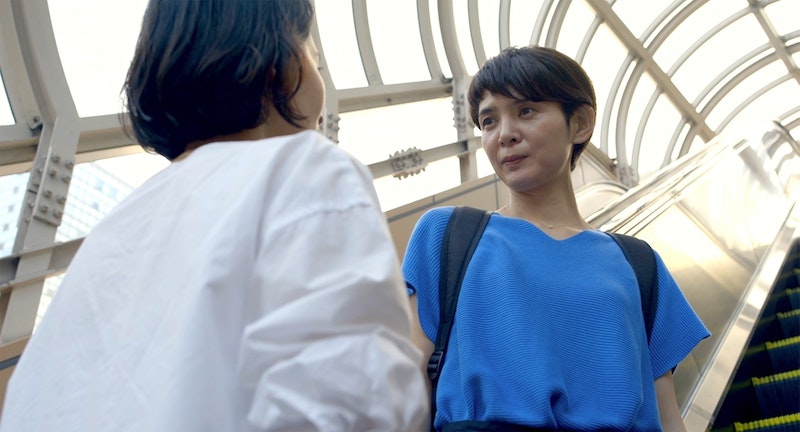 Ryusuke Hamaguchi’s Drive My Car probably deserves its Oscar nominations, but I haven’t seen it yet—good thing it’s coming back to The Charles in Baltimore this Friday. Hamaguchi released two movies in 2021, and luckily the first one, Wheel of Fortune and Fantasy, was returned to Beyond Video in time for me to write this. Hamaguchi’s film is one of the few I’ve ever seen that feel like novels. One of the few people to pull off making movies that felt like books was Alain Robbe-Grillet, whose work was far more astringent and abstracted than Hamaguchi’s “short stories,” as the three parts of Wheel of Fortune and Fantasy are credited.

First is “Magic (Or Something Less Assuring),” what starts as a conversation between two women in a taxi about love, lovers, sex, and planning for your 30s. Cue Meiko (Kotone Furukawa) going to the office of her beau, only to have him explode and trash someone else’s desk with a tennis ball. No one is in but them, and when they finally embrace, a woman walks in. The next day, the woman in the taxi with Meiko invites her to coffee, and who knows, it’s her beau at the table too. After struggling and repeatedly saying she’s going to leave, she bolts out.

Hamaguchi’s cutting rhythm is what makes his movie feel like literature. The way he moves from long takes in medium shots to striking low angle wide shots or close-ups is completely in tune with the material, and the shot cuts right when you know it would on the page. His visual style isn’t “simple,” and it isn’t even always calm: Hamaguchi shoots almost everything with telephoto lenses, even medium close-ups, stretching everyone up and making their movements look surreal and too fast and jagged. Using a telephoto lens in a group scene with five people at a photo shoot looking over their work looks as anxious and uneasy as Yojimbo. It makes everyone look like aliens, and if Hamaguchi’s writing was less warm, his images would be much more disturbing.

The other two parts, “Door Wide Open” and “Once Again,” have the same strikingly novelistic quality of the first part, with each image essential and in its place, as if you imagined it yourself while reading. “Once Again” recalls many works of Tsai Ming-Liang, if only for the setting of the walkway and the escalator. But, as with many Hong Sang-Soo movies, Wheel of Fortune and Fantasy is kind to its characters. The worst that happens is bad sex, embarrassment, and the follies of age. No one is psychotically lonely, strung out or trapped in a psychosexual glass mind prison with red lights, a motorcycle, and Jean-Louis Trintignant.

The similarity to Hong isn’t in the wild zooms that pop up a few times, but in the settings and subject matter, and once again Hong provides a useful relief to show how Hamaguchi’s movies feel like novels and his movies don’t. You get a few people talking in a room about a handful of topics, it’s very hard not to make something that doesn’t feel stage bound or dull. Hamaguchi’s frames feel written, and like good prose, there’s pleasure in everything, from what’s being said to the colored street lights passing out of focus in the background. Smart writing makes you appreciate sentences, and Hamaguchi succeeds where so many others fail in making people talk more than interesting to watch, but gripping.