Ryusuke Hamaguchi’s Drive My Car is a dull, leaden disappointment compared with his other 2021 feature, Wheel of Fortune and Fantasy. 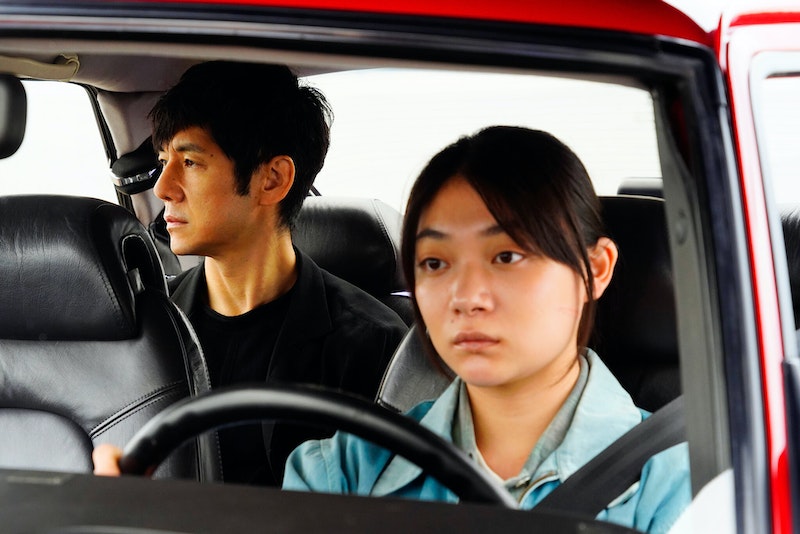 Ryusuke Hamaguchi’s Drive My Car will not win Best Picture, or any of the other Oscars it was nominated for (besides Best International Film, a gimme). This isn’t Parasite, or Shoplifters, or even Toni Erdmann, which would be nominated for multiple Oscars and American awards if it were released today rather than 2016. The voting pool has changed, and it’s not Hamaguchi’s turn. He’ll get to go up once. But it doesn’t matter, he was nominated for the wrong film. Wheel of Fortune and Fantasy, his other 2021 feature, is a striking and compelling counterpart to Drive My Car, a film with no memorable images other than the first one, a naked woman in silhouette telling her husband a story. An anxious, dissonant electronic score bubbles underneath, and at first it feels like the same gripping and novelistic qualities of Wheel and Fortune and Fantasy will sustain a three-hour movie. Less than half an hour in, it loses steam.

Yüsuke Kafuku (Hidetoshi Nishijima) is the husband, and Oto (Reika Kirishima) the wife, but she’s not long for the world. One day, Yüsuke comes home unexpectedly after a cancelled flight and finds Oto vigorously fucking a young man. He backs out of their apartment without saying anything and without either of them noticing. Another day, Yüsuke is about to leave for work when Oto tells him to come home early for dinner because she “wants to talk.” Alarm bells all night, and Yüsuke returns in the early morning, only to find Oto dead of a brain hemorrhage. They’ll never get to talk, and it’ll never be resolved.

Two years pass, and Yüsuke is staging Uncle Vanya, and casts the man that he saw fucking his wife, Kōji Takatsuki (Masaki Okada). The guy went through some version of a #MeToo scandal, and early on exhibits violent tendencies even when mildly annoyed by fans taking pictures of him in public. Misaki Watari (Tōko Miura) is Yüsuke’s driver, and they spend time rehearsing Chekhov in that red Saab. She’s mostly tight-lipped, but eventually she opens up, just as Yüsuke finally does, and even as Kōji gets his teary-eyed close-up looking right in the camera, at Yüsuke, in a limo indirectly talking about his love for Oto. I think it’s funny that he gets carted away after beating a photo-snapping fan to death, but that should’ve been on screen. Another movie, another time.

Drive My Car is the token “international” film that the Academy has picked this year, and it’s a long and slow and difficult one—already a tough sell for most Academy members, let alone most people. It’s insane that Pedro Almdóvar hasn’t gotten his perfunctory coronation yet—are they waiting for his back to go out, or a possible overdose? Pain and Glory was nominated the same year as Parasite, a tough break, but even though I think he’s made better movies than Parallel Mothers, it’s a hell of a lot more interesting than what Hamaguchi has with Drive My Car. There’s nothing as dynamic as Ayumu Nakajima tossing a tennis ball out of nowhere into a computer as his ex-lover cowers in the background, or the use of telephoto lenses in dialogue scenes in Wheel of Fortune and Fantasy. Hamaguchi wrote that film, as opposed to Drive My Car, adapted from a Haruki Murakami story (bad sign).

It’s not a bad film, but one that gains nothing from its three hours, and one that will convince and sway no one toward watching and seeking out more foreign cinema. Aiming for the lowest common dominator isn’t what I’m talking about; there are just dozens of better films from all over the world than this one, which fits the mold of an “Oscar movie” to a T even if it was never intended as such. Stately, unadventurous cinematography; pondering, “serious,” dull; “about grief and trauma.” The wrong Hamaguchi film was nominated, and the wrong Hamaguchi movie will be seen (or, realistically, started and stopped an hour in) by far more people.