A Disney Hit, a Forgettable War Film, and a Disappointing Biopic 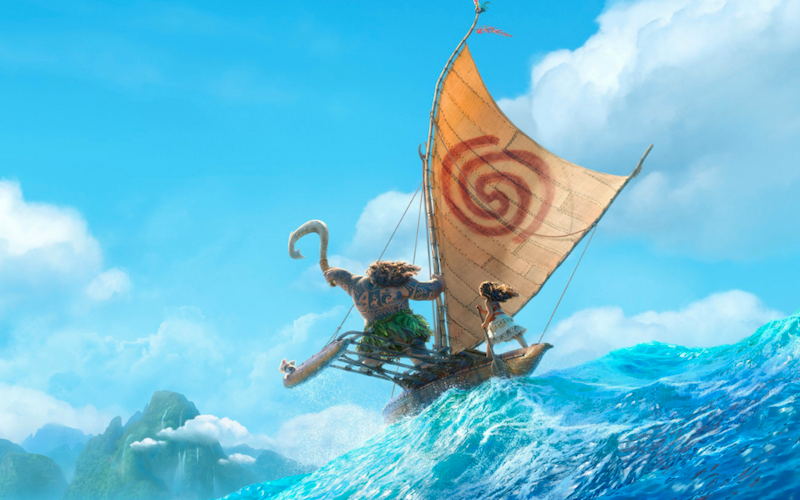 With Moana, Walt Disney Animation returns to the well of its greatest success of the current century, 2013’s Frozen: it’s a female-centered story, with a dash of feminism and little-to-no emphasis on romance. It’s also, like Frozen, a full-on musical, with original songs by a leading, EGOT-chasing Broadway composer.

Moana isn’t an instant classic on the level of Frozen, but it does continue Disney’s strong multi-year run, thanks to great characters, gorgeous animation, a pretty strong story arc, and a pair of first-rate voice performances.

Directed by old Disney hands Ron Clements and John Musker, whose past credits include Aladdin and The Little Mermaid, Moana does an outstanding job establishing its world. The title character (Auli'i Cravalho, in an astonishing voice performance) lives on a Pacific island, as the daughter of the tribal chief (not a princess), but feels a strong connection with the ocean and the need to explore. She ends up on a seafaring adventure along with a demigod named Maui (voiced by Dwayne Johnson, and animated as a humorous caricature of the actor).

Despite the presence of a couple of monsters and non-speaking animal sidekicks, this is essentially a two-character piece, and they’re both amazing.

Moana, as a character, is a more successful version of what Pixar was going for with Brave—a young, tough, female protagonist, trying to find her place in the world. And Maui is a wondrous creation, complete with moving tattoos that function as a sort of Greek chorus.

The film is also full of wonderfully creative ideas, from the ocean seeming to function as a sentient character, to a pirate siege scene, with small coconuts as the pirates, that’s structured as an elaborate homage to Mad Max: Fury Road. So what doesn’t work? The film’s mythology is somewhat weak, requiring multiple MacGuffins and a convoluted explanation of what the stakes are and which widget is required to unlock which outcome. It’s annoying enough when Disney’s corporate cousins over at Marvel do this in two movies a year. And the story drags a bit in the middle.

There’s also a chicken sidekick that’s a big part of the marketing materials, but I found the chicken tiresome; the pig sidekick, earlier in the movie, was a much better character despite not speaking.

As for the songs, they were written by celebrated Hamilton composer Lin-Manuel Miranda, along with South Pacific fusion artist Opetaia Foa'i and Disney soundtrack specialist Mark Mancina. They’re fine, but no real breakouts on the order of the Frozen music, or of Miranda’s own Hamilton songs. Moana looks great and sounds even better, and marks a continuation of Disney Animation’s winning streak.

Allied is not the best World War II movie that’s set in Casablanca in 1942. Nor is it the best movie in which Brad Pitt kills Nazis with his bare hands. But it is a tense, well-done thriller, even if underwhelming in various aspects, and fairly forgettable. Directed by Robert Zemeckis without any notable directorial signatures, and written by Steven Knight, Allied stars Pitt and Marion Cotillard as a pair of spies—he’s Canadian, she’s French—in the middle stages of World War II.

At first, in the Casablanca-set first act, they’re assigned, The Americans-style, to pose as a married couple. Later, they get together for real, have a child, and head to London. But soon, Pitt’s warned that his wife may actually be spying for the Germans, and has to determine whether to trust his wife or his country.

It’s an intriguing setup, well-acted and structured with some tense moments, and it’s clever in that the major reveal perfectly echoes a scene that came earlier. The ending, though, is flat, not really worthy of what came before it. There’s another strange aspect of Allied. Pitt’s most recent World War II film, 2014’s Fury, sort of marked the beginning of the middle-aged man phase of his career. In this, however, the 52-year-old actor looks shockingly, almost incongruously young, like he’s playing Benjamin Button again. Not sure if this is makeup or CGI, but there was no reason Pitt couldn't have looked like his usual self.

As for Zemeckis, happy as I am to see him once again directing live action films with actual humans in them, there’s nothing here that’s visually stunning or technically proficient. His previous film, last year’s horribly under-appreciated The Walk, at least had that bravura action sequence at the end. As much as Allied has going for it, it’s unlikely to be remembered for much more than the tabloid furor that (probably unfairly) engulfed its stars a few months ago.

Until Rules Don’t Apply, his long-gestating biopic of Howard Hughes, Warren Beatty hadn’t directed a movie since Bulworth in 1998, or appeared in one since Town and Country in 2001. The result is welcome but ultimately disappointing. While it’s one icon playing a different icon, always dicey, Beatty gives his all in the role and delivers a strong performance. But what he can't do is deliver any particular insight into the film's subject.

And that’s not all that goes wrong with Rules Don’t Apply. The plot meanders all over the place. It raises huge threads—most notably the religious backgrounds of two characters—and drops them with no explanation. And I’m not exactly sure why Beatty felt this completely fictitious story was worth telling, aside from the fact that he felt like playing Howard Hughes. The film is set in 1958, during Hughes’ time as a reclusive Hollywood producer. Lily Collins plays a starlet under contract with Hughes’ movie studio, whose driver is a young man (Alden Ehrenreich) with designs on getting Hughes to invest in his real estate scheme. A romance seems in the cards but Hughes has a strict rule against fraternization by employees—and of course, he wants the young ladies for himself.

Whatever the faults of the rest of the movie, future Han Solo Ehrenreich is a movie star. Whatever it is, he’s got it—and in this film he resembles a young Leonard DiCaprio, another actor who once played Howard Hughes. As for Collins, she’s fine, and gets a memorable drunk scene, though I’m not sure this is the star-making part for her that it’s clearly positioned as.

The project, if nothing else, is a fascinating failure, one that's certainly not from lack of effort. Cobbling together the funding must’ve taken a long time—there are 16 listed producers and probably the most production logos I’ve ever seen on a movie, although it had the good taste to put them at the end instead of the beginning. There's also a supporting cast, full of familiar names, many of whom are older actors (Candice Bergen, Dabney Coleman, Paul Sorvino, Amy Madigan) who aren’t on screen much these days.

2016 has been graced with several films depicting, in loving detail, the Hollywood of old, whether in the 1930s (Woody Allen’s Cafe Society), the 1950s (the Coen Brothers’ Hail, Caesar!), the 1970s (Shane Black’s The Nice Guys) or in a present day obsessed with the iconography of the past (Damien Chazelle’s La La Land). All of them have gotten the look exactly right, and you could fill an Oscar category for Cinematography or Production Design with just those movies. Rules Don’t Apply doesn’t measure up to any of the others.