A Demon Inside Him, and a Dick

The Hangover II and the new male rebellion. 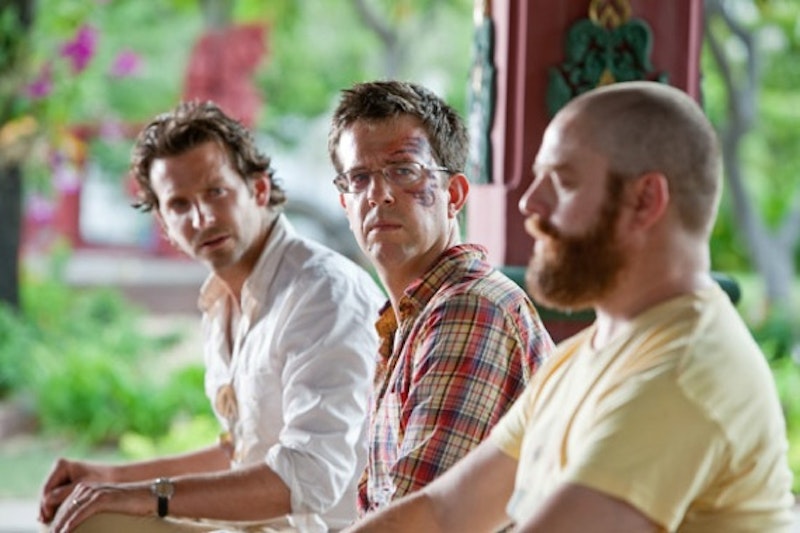 The premise of the Hangover films is that they’re about wild guys who can’t actually be wild unless they’re passed out. The next morning they wake up and shake their heads over mysterious wreckage. (A finger. How did a finger get on the floor? What the hell did we do?) The answer itself doesn’t matter that much. (A soft-spoken Asian lad played a hand-eye coordination game involving a knife.) What matters is that they get to ask the question. Last night they were off the leash, the leash being rules, women’s demands, socialization—consciousness, as it turns out. In the normal course of things, these guys are losing as soon as they open their eyes. They can’t manage to be themselves until they’ve crashed their brains.

The Hangover Part II is a retread, as you might expect. It replays the first movie’s set-up and highlights, so that seeing the new movie is a lot like going on a Hangover Part I theme ride. I caught the movie a couple of weeks into its run, on my multiplex’s bargain night. The house was almost full but had already been milked for laughs by commercials, talk show clips, water cooler talk, and so on. The place didn’t roar. The bits got laughs, the movie was working, but you could hear the individual voices that went into the response, like rocks showing when the tide pulls back. “Ba-a-ad idea,” a teenage boy said, delighted, when one of the guys said they should have drinks on the beach. The boy was responding to the movie’s theme park side: Mention everybody having drinks and you knew exactly what was coming.

Pretty soon the crazy stuff started. “Oh Gaa,” said a woman a few rows behind me, and she did it again five or six times over the next hour or so. The Hangover films keep the business coming, but it’s more gross-out material than jokes. As much as anything, you’re supposed to flinch and let out a yelp. The first “Oh Gaa” was triggered by the sight of the guys’ Chinese pal (Ken Jeong) in a pair of skimpies. Another came when a 10-year-old Asian boy almost got his trunks pulled down. And the biggest came when a hot Asian stripper stepped back from her dressing table and let her dick dangle in view. Either straight audiences are gayer than I think or the 60-year-old logic of gross-out has reached a climax. Or both, I suppose. But Hangover II, that dull retread, is the first summer Hollywood money-grabber to feature a cock in full view.

Not only that, but it’s a cock that’s been up the hero’s ass. The stripper is a chick with a dick, and she fucked Stu the dentist and he liked it. The first movie treated Stu (Ed Helms) to a good time. His night of blacked-out primality left him with a bubbly, good-sport blonde girl, a prostitute played by Heather Graham. What Stu learned was that, unleashed, he could fuck a woman who looked like she was from a beer commercial. This time he’s in different territory. By now the movie’s nearest entertainment landmark isn’t a beer commercial. It’s Ricky Roman’s speech from Glengarry Glenn Ross: “You think you’re queer? I’m going to tell you something, we’re all queer… Fuck little girls? So be it.” Stu has learned that he is beyond man and woman, as he always understood them. He’s beyond any story he ever told himself.

The movie could have handed Stu a different payoff. Instead of getting butt-fucked and stretching his soul around the experience, Stu might have chewed off somebody’s finger. Simple enough. Last time he had his triumphant sexual moment, this time his orgasmic moment of violence. He could still say, “I’ve got a demon inside me” (his big line from the new movie) and there’d still be the gross-out factor, what with borderline cannibalism and involvement of the mouth (where had that finger been?). The guys’ poor little Asian buddy, the good-looking fiancée’s soft-spoken younger brother, wouldn’t have to get mutilated in a knife game. The finger would come from a thug or a stripper, or possibly a dominatrix with a specialty in enemas. Mike Tyson, doing his walk-on at movie’s end, would drop his jaw and stare at Ed Helms: “You did… what?”

But the makers threw the long bomb. They went existential. Now the movie’s best moment comes when Stu and his buddies drift down a Bangkok river, Stu with an acoustic guitar on his lap. In the last movie he sang a goofball parody ballad. This time he counts off the terms of his new reality: drugged, beaten up, sodomized—“Roasting marshmallows on a stick, I got fucked in the ass by a girl with a dick.” Last time his song could be a goof. This time he’s piecing together his universe and facing up to it.

When the movie finishes, Stu finds the backbone to tell off his jerk father-in-law, and the telling off takes the form of a speech about Stu’s demon. That speech comes from Stu’s night of getting butt-fucked and his day of soul-searching. In the old days, when similar films had to be wrapped up, nebbishy heroes would have been built up for their big moment by hitting spies or making chumps out of snooty waiters. Stu, to get prepped, claims his whole soul. He learns that he is a self that must negotiate its unique situation in the universe.

He does all this is in the middle of a guys’ summer comedy, and not a really good one. The movie is so slack and paint-by-numbers that the Asian kid’s missing finger turns out to be no big deal. The kid was a cello virtuoso—the film sets that up at the beginning so Ed Helms can feel more crummy and outclassed. But at movie’s end the kid, minus finger, is smiling like nothing happened; he just wants life to be pleasant for the scriptwriters. Yet the movie took the long way round to give Helms his character arc. It went to that much trouble.

That shows dedication to butt-fucking. But on whose part? Maybe it’s the filmmakers, maybe it’s the audience. By now getting butt-fucked may be such a classic gross-out weapon, such an acknowledged heavy-duty item in the arsenal, that the series’ makers knew it had to be next off the shelf or people would be disappointed. Ass-rape was a no-brainer, and Stu’s resulting crisis was wadded together to go with it. “Last time he learned he was wild. This time he learns that he’s really, really wild but he can deal with it. Because you have to be yourself.” Which is close enough to my version of what Stu learned. Maybe, after so many decades of entertainment-by-transgression, we have the clichés lying around for honest Hollywood comedy makers to do Jean Genet without knowing it.