Oblivion has everything to love about B-movies and more. 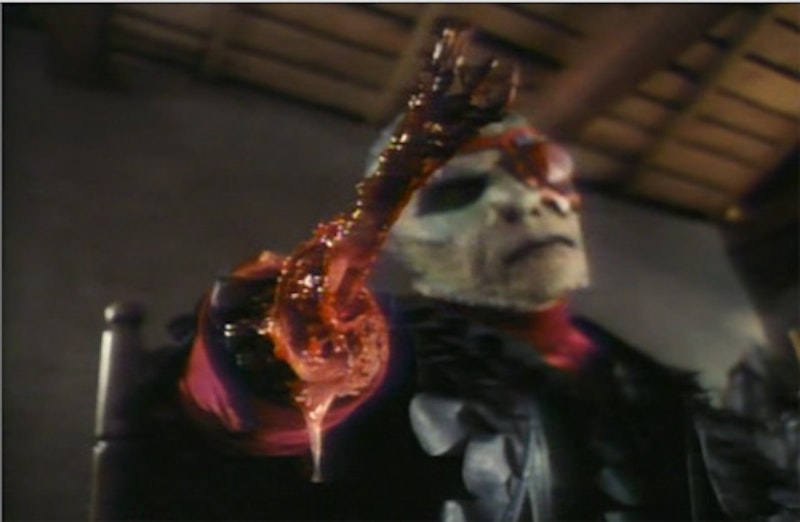 There’s a kind of purity to the B-movie. Partially it’s the lack of pretension; partially the unapologetic fauxness. Major releases usually have a pretense of meaningfulness or relevance, or at least the ambition to be sufficiently realistic to make you forget you’re watching a movie for some brief period of time.

A movie like Oblivion, though, revels in its very ersatz insubstantiality. Released in 1994 by Full Moon Productions, and just re-released on DVD, Oblivion is ostensibly an outer-space Western, but cheerfully detours into comedy, horror, sexploitation, or total nonsense at the slightest excuse.  George Takei is cast as a drunken doctor solely, it seems, to give him the opportunity to stare at his bottle and declare, “Jim…beam me up!” Musetta Vandor is decked out in full dominatrix regalia, complete with multiple gratuitous ass shots and lascivious bisexual advances on Jackie Swanson’s good girl store owner. Julie Newmar, older than in her Catwoman days but still sexy, hisses and meows because if you hire Newmar, that’s what you ask her to do.  An awesomely appealing monster puppet frog critter provides the pretext for a shockingly bad comic book pun and some of the movie’s most bloody visuals. And through all these arch references and goofy asides, the film’s main recycled plot—baddies take over town, reluctant hero must defeat them—trundles on, derailed and half-mocked but never actually disavowed, as if somebody, somewhere, failed to get the memo that the whole thing was a lark.

One of the first scenes sums up the film’s pleasures. A cowboy gets some money out of an ATM machine, a horse squeals and then we see, of all people, Carel Struycken dressed in black Victorian-era robes with an looming top hat, walking down the center of the Old West street, with a building looming behind him that looks so much like a façade you expect it to topple over on top of him at any moment. The credits rolling across the screen aren’t any less real than the action itself, and in case you missed the point, the camera actually takes a moment to show you a movie poster against a random wall. “Now see wild Bill in…Outcasts!” it announces, and the fine print reads “Coming Soon to a Hologram Theater Near You: Another Full Moon Production!”

Oblivion is its own hype; indeed it’s nothing but the hype, really—just grease paint and a barker. It offers you familiar faces, familiar plots, in-jokes, a bit of action, a little T&A, and, most of all, its own tawdry movieness, all the truer because it’s so entirely, engagingly fake.