After four seasons and 36 episodes, Mardi Gras has ended. 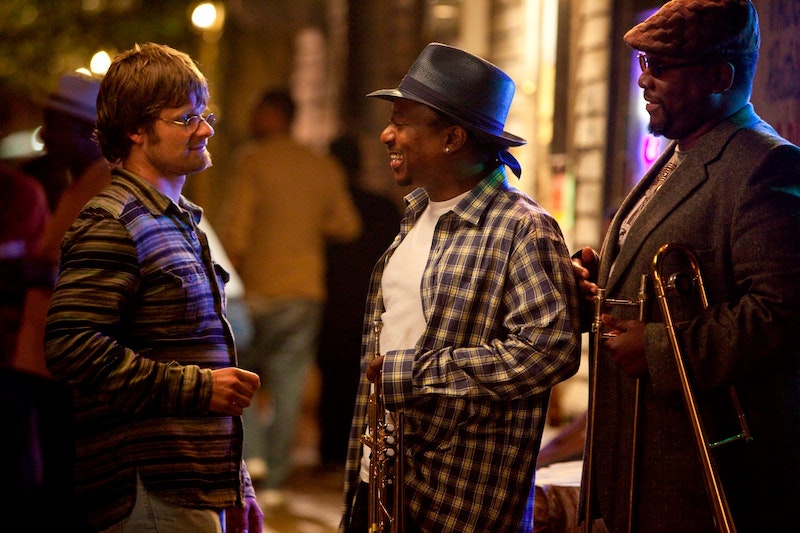 Ask any critic or avid TV enthusiast what the best show of the last 10 or 15 years is and you'll no doubt get pretty much the same answer over and over again: The Wire. Yes, The Sopranos came first, and there's been plenty of competition since—Breaking Bad, Mad Men, Deadwood, etc.—but The Wire, despite its low ratings throughout its five seasons, is now retroactively regarded as the pinnacle of our recent TV revolution. Surely it's the most "Dickensian" of recent TV dramas, to borrow a favored word of one of the dim-witted Baltimore Sun executives in season five, less about characters than society, but without the overt partisan politics of, say, The West Wing (or, God help us, The Newsroom). In David Simon's Baltimore, there's drugs, murder and corruption, and little hope of stopping any of them—"It's all in the game," as Omar and so many others remind us.

Simon's follow-up, Tremé, which wrapped up at the end of December, will never be regarded as on par with The Wire, even if Tremé is, arguably, a more emotionally satisfying show. Set in New Orleans in the years after Hurricane Katrina devastated much of the city, Tremé follows a regular cast of New Orleans residents, and features two alums from The Wire, Wendell Pierce as trombonist Antoine Batiste and Clarke Peters as Albert Lambreaux, the "Big Chief" of a Mardi Gras Indian tribe, as well as a ton of local New Orleans musicians, who take over the better part of any episode with full song performances. Tremé is, perhaps, more than anything else, a documentary tribute to a style of music found nowhere else. A lecture by Creighton Bernette (John Goodman) to his students at Tulane in season one describes Simon's ambitions:

Tremé is a love letter to New Orleans, short on plot but strong on acting and cinematics. Simon works in his expected frustrations with the cops and the legal system. David Morse is wonderful as Terry Colson, a longtime NOPD lieutenant desperate to expose departmental corruption but held up at just about every turn, while local attorney Toni Bernette (Melissa Leo) and out-of-town reporter L.P. Everett (Chris Coy, playing real-life ProPublica journalist A.C. Thompson) investigate the post-Katrina shootings at Danziger Bridge and elsewhere. And while their work contributes to indictments of NOPD officials in the final episodes, this is still a David Simon show: a battle has been won, but the war goes on.

Other characters move from A to B but there's not much to remember about what got them there. In the show's second to last episode, for example, "Big Chief" Albert succumbs to cancer—and certainly Peters delivers some of the finest acting of his career in the show's final five episodes—but Albert's death is more about the traditions that will live on after he's gone; which is to say that Tremé felt less like a conventional TV show than maybe any other show that's ever aired. There's no gratuitous killing off of main characters. In a recent interview with Alan Sepinwall, Simon talked about the current limits of TV drama:

There are some narratives that are readily applicable to television in longform. You can tell them in a novelistic way, but they require at least one of three fundamental currencies, which are violence, sex and comedy. And so absent that, the golden age of television, such as people are calling it, certainly makes it possible to tell novelized stories that we couldn't before. But a lot of what I'm interested in is kind of what's real in the world. There are things that are not applicable within the current framework and the current economy. I think Tremé is a little bit of a lesson in that… this is my problem with being out of journalism: I'm not interested in depicting the world as being more dramatic or hyperbolic than it is.

I hope Simon finds an acceptable framework for the stories he wants to tell, because Tremé is TV at its finest. We'll all have lost something if HBO and AMC go the way of melodrama, or constant over-the-top action.