Why We Need Ben X

A 2007 Belgian film, now screening in the U.S., finds a useful societal parable in the story of one tech-addicted Asperger's patient. 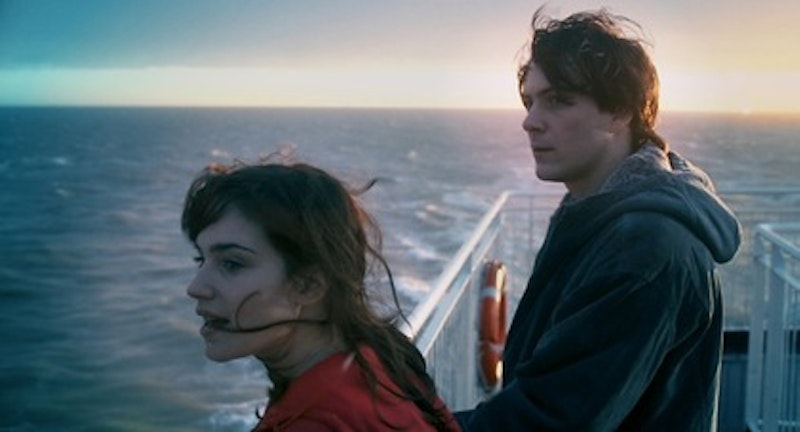 Look around any subway platform, airport waiting area, coffee house, college classroom or cafeteria, or any office or workplace. What do you see? People and their machines; hands on keyboards, ears stuffed with tiny speakers, eyes fixed on screens—Internet-ready, video-capable, equipped upload, download, post and captured in 10 different ways.

I realized the other day while waiting to be picked up at the train station that I couldn’t just stand and wait with my fellow passengers; I had to be doing something, looking at something, searching for something. So instead I sat down on a bench, scrolled through my phone, scrolled through my camera’s pictures, then sent a few texts, made a few calls, downloaded a new ring, and then, still alone at the station, I turned on my iPod and obliterated the strident orchestra of voices around me.

Belgian director Nic Balthazar’s debut film Ben X, winner of the Grand Prix at the Montreal Film Festival last year (and just released in the U.S.) is a diabolically charming tale of a teenager with minor autism who deals with his disorder by pretending reality can be controlled like a video game. As he tries to navigate the dangerous waters of a less-than-accommodating public school, sociopath bullies, divorced parents, misguided doctors and his own dark impulses, Ben’s fragile hold on reality starts to slip. One minute he’s in his game, his armor on, sword in hand, enemies surrounding him on all sides, and the next minute he’s in another ominous battlefield: math class. In the safety of his room, Ben is always at his specially designed gaming station (his monitor in embedded in what seems to be a mountain range of paper-mache blue ice) where he goes online and very seriously plays his sci-fi knight game with his online side-kick and secret crush “Scarlite.”

Balthazar lets us do the guessing if Ben is imagining or really experiencing the events of his life, and it’s hard to tell how much is part of the intricate fabric Ben’s trapped and fertile mind. While the film often slips into a predictable “weird-kid-gets-tormented-by-the-cool-kids” pattern, it’s rare that we root for a character so much and accept his fractured mental state so completely that the idea of half his life being dreamed-up delirium doesn’t make it less appealing or real to us.
Fusing traditional footage with full screen graphics from Ben’s game (the real game Overlord) along with Ben’s camcorder and cell phone video footage, Balthazar identifies one of the greatest contradictions of our tech-crazy times. As thoroughly modern social beasts, we are obsessed with being connected to each other and capturing every second of the present moment; but because we experience reality and each other not through our eyes but through our tiny cameras, we separate ourselves from the messy, organic interactions of the present.

Like Ben, who needs his mp3 player to make it to school across bustling Brussels without having a panic attack, Balthazar wonders if maybe it’s us who can’t experience the beauty of nature or the spontaneity of the city without the metal security blanket of some sort of device or devices on our person at all times. Yes, we know what the doctors have said about poor Ben, but Ben X makes you wonder if maybe we have a problem. When did these accessories become our absolute necessities? When did we start needing five pairs of eyes to see what’s in front of us?

And yet, for Ben, the technology is far more than a useful accessory; his fancy cell phone, mp3 player, gaming computer and video camera are not simply tools of diversion, communication or production, they are his survival. Though his body is hopelessly awkward to the point of uselessness in gym class, in Overlord he runs and jumps and wields a sword with ease. And while his grades are often lackluster, in the competitive gaming world “Scarlite” reminds Ben that he has reached a level others can only dream of.

Shot with an effortless observational touch, Balthazar does a masterful job of keeping the film’s palate cool and subdued with lots of blues and greens and browns—making it the ethereal “Scarlite” who wears the striking red sweatshirt in every scene, a piece of cherry candy to sweeten Ben’s mostly sour existence.

And until “Scarlite” brightens his world, it sure is grim for Ben. Like many people with Asperger’s, the simplest human interactions are Herculean efforts and Ben’s beleaguered single mom, (an emotionally raw Marijke Pinoy) has to keep reminding him to do the most basic of human actions—acknowledge her words, eat his breakfast, kiss her goodbye. Thanks to newcomer Greg Timmermans, Ben’s silence and his prickly discomfort are torturously tangible in each frame. His natural face is blank, his natural state is alone and when he is forced to cohabitate, to interact and react to everyone, we see him forced to remember how the real people do it, how his mother does it, how his normal little brother does it.

After growing up being shuffled from one doctor to another, Ben has found that the only thing he can do is try to recreate the semblance of normal life—to pretend and ape his peers. Perhaps he believes the bullies Bogaert (Titus De Voogdt) and Desmet (Maarten Claeyssens) when they call him “Martian”; Ben’s body and mind are not engineered to succeed on this planet. Since by instinct he hasn’t the slightest clue how to talk to girls (or anyone for that matter) he lets his video camera be his teacher and learns from other people’s romantic movements. Ben dutifully prepares for his world-changing real life encounter with “Scarlite” by secretly taping the greasy high school couples kissing at the bus stop, hoping to memorize the boys’ savvy touches so he’ll know what to do when the time comes.

One of the most poignant scenes in the film is when Ben can be found in that little park a few minutes from school, imagining he is with “Scarlite,” seemingly kissing her passionately, (just like the boys did in his video) when—after we cut back to him—we see he’s really only kissing his hand. It’s heartbreaking and exhilarating all at once because you know he’s really feeling it regardless of the actual circumstances.

The flurry of interconnected twist endings cements Balthazar’s message that reality can be malleable through technology and our intimate relationship to it. We can be whomever we want and meet whomever we want. When the digital world is just as powerful as the physical, the actual physical existence of our soul mate or our ideal self is an afterthought. And in the case of a near-lost cause like Ben, it’s the fantasy that saves his life.