1917 is an Impotent Imperialist Lie

Sam Mendes’ WWI film is an aesthetically barren and politically naive bedtime story that dying empires whisper to themselves. F 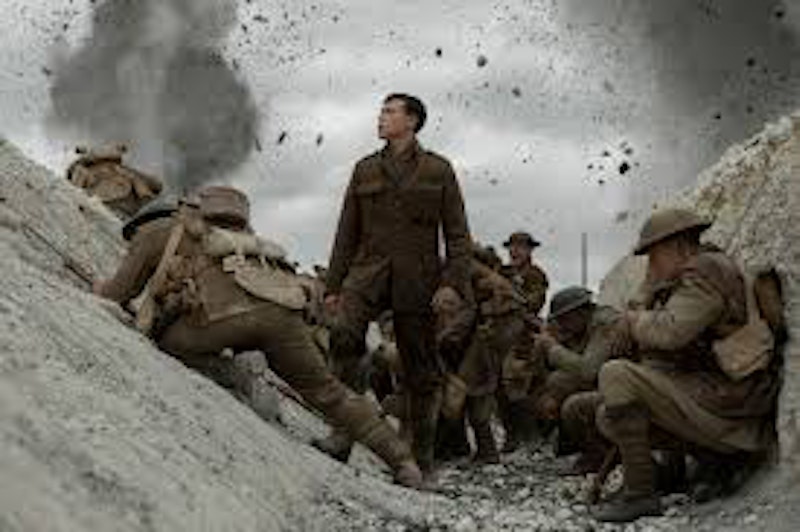 I wrote a negative review of Peter Jackson's They Shall Not Grow Old last year. A World War I documentary made up of restored and colorized footage of soldiers from the front with narration by a handful of survivors. It was a nice film, a pleasant film, two things a war film should never be. But I was unkind to Jackson's documentary, which wasn't about war, it was about people and preserving their memory. It wasn't exploitative or manipulative, it was a noble effort I kicked in the teeth because I'm sick of prefab war movies. I wrote that, "Their sentiments and views towards war and 'supporting the country' are so far removed from where we are as a country today that the film comes off as gross and misguided." Rather than nitpick the politics of long-dead veterans who don't deserve it, I'll aim at Sam Mendes and his new lie, 1917.

Mendes’ film is proudly pro-war, bloated by the comforting lies a dying empire whispers to itself. Imagine a film as daft and politically naive as Christopher Nolan’s Dunkirk without any of the technical splendor or gravity-defying cinematography. Now strip that script of what little originality and poignancy it had (particularly with the character played by Barry Keoghan). You’d still be left with a comparatively more interesting and daring director. I’m not a big fan of Nolan, but I enjoy his non-Batman films. Inception and Interstellar are great pure entertainment movies, and even if the latter doesn’t hold up to the most casual of scientific inquiry, I don’t care. There’s nothing like the eight-dimensional bookcase at the end of Interstellaror the M.C. Escher physics of Inception in Mendes’ film. Like his greatest success, 1999’s American Beauty, it’s a film that believes it is not only smarter but also more noble and humane than it actually is.

1917 proves an apocryphal François Truffaut quote: “Every film about war ends up being pro-war.” Combat is inherently thrilling, and any depiction is necessarily reductive and perverted. But since the horrors of the Holocaust and a protracted reckoning with Vietnam (we haven’t properly addressed Afghanistan or Iraq because they haven’t ended), there haven’t been many movies about war that didn’t implicitly endorse it. To my mind, the only major one is The Deer Hunter. Michael Cimino gets pegged as a fascist, but I don’t see any of that in his second film. We spend an hour with these men at home in Pennsylvania, moving from the severe industry of steel mills to the insane violence and chaos of combat in Vietnam in a single cut. That movie had a physical effect on people: Cimino remembers being brought down to the lobby during a preview screening by a nervous assistant, only to see the men wandering around in a daze, and the women all hysterically crying and vomiting in the bathroom.

Hollywood has dramatized both World Wars more than any other historical conflict by a significant margin. It’s easy to see why: these were morally unambiguous wars, the first a folly all-around, compounded by new technology that outpaced old methods of combat. And you couldn’t have dreamt up a better foil than The Third Reich, an empire as evil and severe as the Wagner operas that soundtracked their bombing runs. All of America was able to mobilize and sacrifice in service of fighting a common enemy whose inconceivable cruelty was exactly that—impossible to comprehend—and simply needed to stop.

The spoils of that war, and the individualism of the 1960s and early-1970s, destroyed the possibility for any future national unity. There was a consensus on 9/11 for about three months, but that was all gone by the time David Frum wrote the Axis of Evil speech for George W. Bush. The sacrifice and rationing by their parents during the war was not carried over onto the Baby Boomers, who largely balked at Vietnam, for good reason. How can you believe in your country enough to die for it—whether in the jungle or on the streets of Chicago—when the enemy is within? What about now, when surplus tanks bought for the Iraq War are used on American citizens protesting in Ferguson, MO? And even more recently, the tactics of ICE, who routinely take Hispanic Americans off of trains into dead-zones, as they become as much of a non-person as a Jew was in early 1930s Germany.

And I’m writing about Sam Mendes’ 1917, but Brody got the vitals, and I don’t want to beat a dead horse. I want to dissect it. We see several dead horses in 1917, and many bodies obliterated by mortars and mud, but it’s all too nice. The film follows two English soldiers sent on a suicide mission to deliver a letter from one top brass to another to stop an attack that looks like an ambush. Commence the “one shot” journey through the hell of trench warfare in the French countryside. But Mendes’ vision of hell is rather nice; there’s gore but not that much, not enough to make you feel anything real. 1917 is a dead film full of ciphers and signifiers that add up to one of the most shallow and politically incurious war movies I’ve seen in years. You don’t go into Angel Has Fallen or Triple Frontier for substantive political critique. It wouldn’t make sense to expect James Bond or Jason Bourne to be “woke” about the military-industrial complex because they are creations of it—but they don’t pretend to be anything else. They know what they are, and they say as much.

1917 is an inappropriate at best, and offensive at worst, attempt to “beautify” a subject that’s inherently anti-aesthetic. One of the soldiers we follow dies fairly early on, and my brother had a brilliant idea for a truly anti-war film: set up a protagonist and kill them off early, then set up another and let them live for slightly longer, but then pick up the pace to the point where you don’t even know the names of the soldiers you’re following. Emphasize the anonymity of these men, the complete futility of their suffering, and the meaninglessness of the “honor” of a medal or a plaudit once you get home. The two soldiers have a mild argument about this, and of course the one that dies first believes in the medal, “It’s not just a piece of tin—it has a ribbon, too.” Naturally, by the time the successful soldier makes it to the front and delivers his orders, he’s come around on the whole medal business. He’ll be thanked for his service for the rest of life, and perhaps remembered just as Mendes honors his veteran grandfather in a closing title card.

This is a dangerous film, a film that tells a stale lie that no one really believes in anymore. They may want to, desperately so, but how much longer will people tolerate films that “both sides” military conflict? Because the clash here is not between countries, but the powerful and the powerless. War’s an industry that murders the poor, and Hollywood’s been complicit in valorizing service long after that motivation was necessary or moral. I don’t want to see any more World War movies. They’ve been completely exhausted, and they all sell the same lie: war is hell, but someone has to fight it. “Never again” really means, “Don’t ask, we covered it.”

Generations still living that remember war rations and war stories can sink into these movies because they’re familiar and safe, two things a war movie should never be. There are ways to make imperialist critiques within blatantly jingoistic work: look no further than John Ford’s Fort Apache, whose last shot illustrates the futility and anonymity of these supposedly “great men.” I can’t say Mendes failed because this is exactly the movie he wanted to make: unchallenging and stuck in the past. The cinema deserves better than this prestige picture pigeon shit.