Like a Boss is a raunchy, slapstick female buddy comedy with a few choice moments, but as a film it doesn't hang together. B- 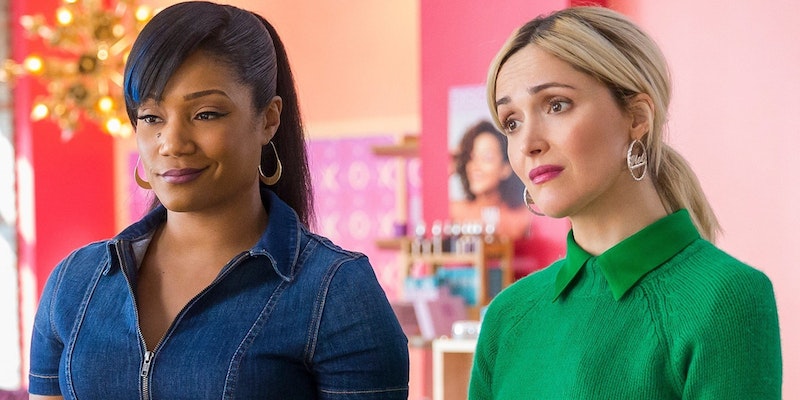 For a comedy with a running time of just 83 minutes, Like a Boss sure has a lot of different things on its mind. It's at once a raunchy, slapstick female buddy comedy in the tradition of Girls Trip, a satire about feminism and entrepreneurship, and a feel-good message movie about the importance of adult female friendship and the dream of a fashion industry that doesn't prey on the insecurity of women. It's a lot to juggle, and despite a few choice moments, the film doesn't hang together.

The film stars Tiffany Haddish and Rose Byrne as lifelong best friends who run a makeup business. Both single and childless while their oft-judgmental friends are all married with kids, the pair sells an interest in their debt-laden company to Claire (Salma Hayek), a wealthy makeup mogul with obvious bad intentions.

Can the friends keep their integrity, hold up their values, and maybe grow up a little bit, while defeating a rival who's intent on turning them against each other? The answer probably won't surprise anyone who sees this movie. Most of what works in this movie is what goes on at the margins. Haddish does her usual schtick, which remains robust, and she and Byrne are good together. The film lets the characters have casual sex with disposable males, and doesn't build to romantic catharsis, which is refreshing. Jennifer Coolidge, as one of their employees, has an amusing supporting role as a woman whose dialogue slowly reveals her wild, tragic backstory, while Billy Porter (from Pose) steals a couple of scenes as a makeup store sideman.

But the main thrust of the plot is weak. Hayek’s a cartoonish villain, none of the business stuff is compelling, and it's clear all along where everything is going. And a couple of sequences of physical slapstick feel out of place from the rest of the film, and only feel shoehorned in because Haddish did similar things in other movies.

While the film hints at having something to say about CEOs like Hayek's character being fake feminists, its heart clearly isn't in that, and Like a Boss imagines a world in which it's possible to compete in the makeup and beauty industry by being entirely positive, as opposed to preying on the insecurities of its customers. The Amy Schumer comedy a couple of years back, I Feel Pretty, attempted something similar, also mostly unsuccessfully.

The film also introduces a pair of heterosexual bros (Ryan Hansen and Jimmy O. Yang) who are women's makeup entrepreneurs, but it leaves this promising subplot half-baked, too. Like a Boss was directed by Miguel Arteta, one of the more interesting indie auteurs in recent years. His 2017 Beatriz at Dinner, also starring Hayek, was a much better-assembled look at 21st-century economic anxieties.