Not the commenters, but the staff. 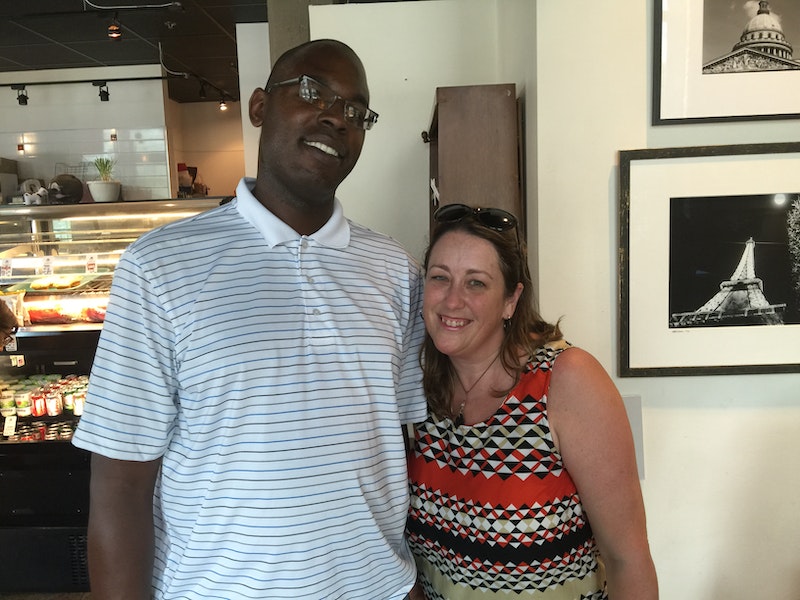 One of the distinct disadvantages of operating a non-local, pop culture/political website in 2015 is that if the staff is skeletal—like most are—it’s not often you actually have real, as opposed to virtual, conversations with contributors. It nags me, and on the occasions that a few writers descend upon Baltimore for lunch this point is punctuated. Last Friday, for example, Mary McCarthy (Maryland’s Eastern Shore) and Ray Cummings (Pennsylvania)—pictured above—came to Splice Today’s modest Charles Village office, and, along with in-house regulars Zach Kaufmann, Nicky and Booker Smith and myself, we walked a few blocks to the popular café Charmington’s. It was a swell time, all of us gabbing at and over each other, with several verbal threads going on at once, and if not much was accomplished editorially, at the least I had the fun of ribbing Mary for eating a veggie sandwich that was encased in… fried dough.

I’ve never met some of Splice’s most prolific writers—Noah Berlatsky, C.T. May, Loren Kantor, Emma Kidwell, Mike Misiak and Dan Soderberg, for example—and though there are frequent pictures of Noah on Facebook, I’ve no idea what Mr. May even looks like. He’s an enigma (no pictures on Google), sort of a recluse hiding out in Montreal. Is he on the lam? That’d be pretty cool, but who knows? I’ve met Madison Moore once, when he lived in Brooklyn, and he’s a great guy, but he’s now teaching in London.

As one whose journalism career began many decades ago, this is odd and unsettling: how can an editor make technical suggestions to writer, or noodle around thinking of future story ideas, by email? Can’t be done. One writer has a very irritating habit of getting proper names incorrect, which is a problem if it escapes our small fact-checking process. When notified of this, he simply says, “Oh shit, yeah, I really suck at that!” No remorse.

At the last weekly print newspaper I owned—New York Press—the spacious offices in Lower Manhattan’s historic Puck Building were abuzz from early in the morning until knock-off time at six or seven. Granted, it was a larger operation—at its peak, there were around 60 employees—but still, as my straight-laced accountant used to say, surveying the scene, “This is a circus of humanity.” As were, of course, several other weeklies in the mid-90s, including the Village Voice and New York Observer. Mondays were production days, with a printer’s deadline looming, so writers were discouraged from coming in, as there was no time to chat: our excellent copy editor Lisa Kearns, for example, was too harried talking to Alex Cockburn on the phone about his late copy, often scolding him for awkward transitions—or verbatim paragraphs that appeared recently in an obscure Irish publication—and John Strausbaugh would just snarl at columnists who made the mistake of intruding at six o’clock. But Wednesdays were more relaxed, and after an in-house meeting of the editors—sometimes nothing got done, but at other times flashes of brilliance (at least to us) were thrashed out—and then the writers would straggle in to pick up records or books, flirt with fulltime staffers and discuss upcoming stories. It was a parade of mostly locals: Mike Doughty, Amy Sohn, Jonathan Ames, Bill Bryk, Howie Kaplan, Alan Cabal, J.R. Taylor, George Tabb and his dog Scooter, Tim Parsa, Jessica Willis, and so on. Before he hit the well-deserved jackpot of Oscar fame for The Departed, Bill Monahan was scraping by, writing 10,000 word articles for NYP that would give Strausbaugh fits as he took the first stab at the manuscript, and sometimes you’d walk into the office and find that Bill had spend the night, sleeping on the floor. I’d walk over him, and then he woke and asked for an advance. Art director Michael Gentile had his own posse of cartoonists and illustrators that he’d hold court with.

On most nights after work, several of us would slip down to Milano’s or the Knitting Factory on Houston St. for drinks, or Puffy’s in Tribeca, and before the conversations turned into a stream of gossip, sports or music preferences and often gibberish, some pretty great ideas were hatched, 30 percent of which survived the following day’s sunrise.

I’ll take off the nostalgia suit now, and simply reiterate that the anonymity of a website isn’t an optimal way to produce game-A journalism. Not an original observation by a long shot, but it still bugs me. What’s worse is that a new generation of young writers—paid far less than their predecessors—have never known a different work environment.