Was Justine Sacco the Victim of Bullying?

Being cruel in the name of fighting cruelty. 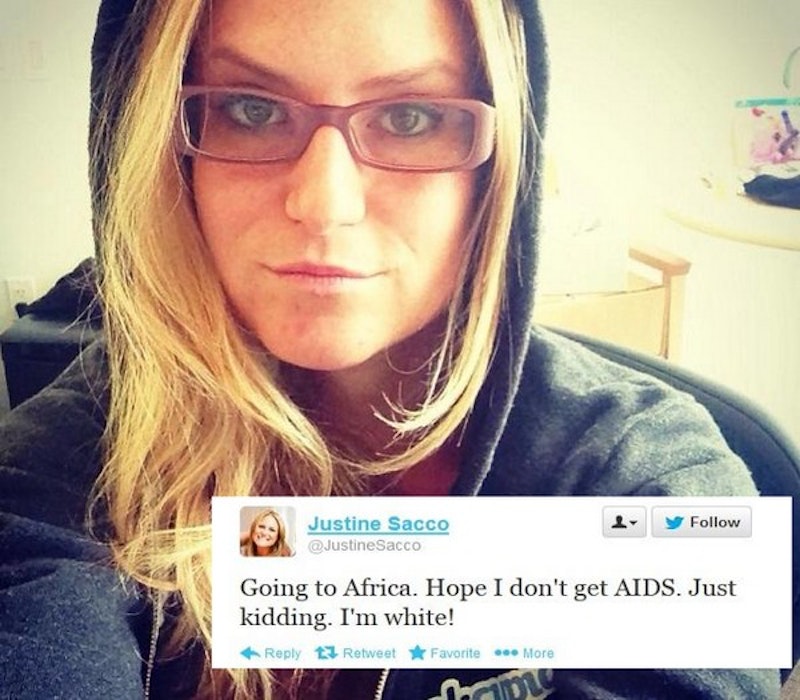 In the world of social media, a momentary lapse of judgment has the potential to ruin one’s life. Take the case of Justine Sacco whose stupid and racist remark cost her far more than she could have ever imagined.

Thanks to BuzzFeed, Sacco's tweet went viral and was around the world in a matter of minutes. She was in the air headed from London to South Africa when she posted it and more than likely had no idea the shitstorm that awaited her when she landed. In fact, the hash tag #HasJustineLandedYet accompanied nearly every response to her tweet as people around the world gleefully awaited the moment she landed on the tarmac and realized the repercussions of her action.

The worldwide reaction to Justine's tweet was extraordinary. Millions read it and many replied; they all reacted with anger and disgust. She was berated and lambasted and called a variety of names on Twitter. Not long after, she deleted her Twitter account, posted an apology on Facebook, and then dropped off the radar completely. I predicted that within 24 hours of the tweet, her employer, media giant IAC would fire her from her position as Corporate Communications Director, and they did, followed by a scathing statement criticizing her actions.

Sacco’s been ostracized because the entire world knows who she is, which got me thinking—was she the victim of bullying? Perhaps bullying is a strong word but take a step back and consider the definition of a bully. Generally it's a person who uses strength or power to intimidate another, and usually, the person who’s intimidated is the weaker one. In this case, the power was in the hands of the tweeters and Sacco was the weak one. Had she handled the criticism, she might’ve simply tweeted her apology and moved on. Instead, she caved to the intimidation and humiliation and did what may have been the only thing she could do and perhaps even what some people wanted—she turned tail and ran. Can anyone blame her?

Maybe you think I'm out of my mind. There’s no way Sacco was a victim of bullying and she brought this upon herself. Sure, but it doesn't mean she deserved to be publicly vilified in such a cruel manner. People say and do stupid things every day and yet most don't know about it. Sacco's tweet was the subject of every major news media outlet within hours. Once the mainstream media got a hold of it, she became a household name. Her story was the headline on nearly all the major news networks the following evening. If she had said this to a friend or co-worker, we wouldn't even be talking about it. So what's the crime? Is it what she said or the very public forum in which she said it?

Considering the popularity of the current anti-bullying movement, it seems a bit antithetical that Sacco would be drawn and quartered for the entire world to see—just because of something she said. I'm not defending her tweet, but the responses reminded me of a mob mentality—when people are influenced by their peers to adopt certain behaviors or follow certain trends. The responses to Sacco’s tweets made me think they were less about being personally offended and more about jumping on the bandwagon because it was the popular thing to do at the moment.

My good friend Max Weiss said something that resonated with me: Sometimes people can be awfully cruel in the name of fighting cruelty.

When being critical, we all need to take a step back and ask ourselves: are we making the situation better or worse? Are we doing the very thing we despise and condemn?

Sacco's crash-and-burn reminds me that none of us is immune to poor judgment. In fact, we are all one tweet or one Facebook post away from being in her shoes.