The Top Five Most Depressing Lessons I've Learned While Gaming 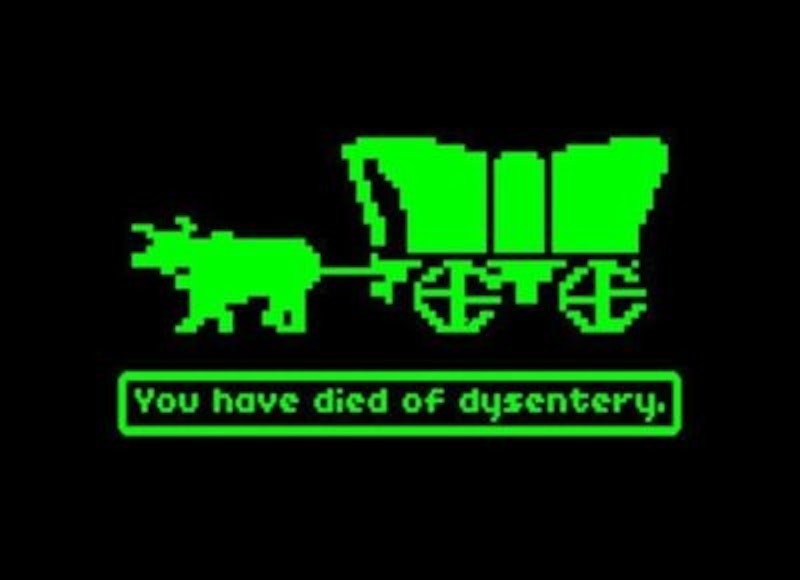 Skyrim is an open-world adventure game where you play a character gifted, and cursed, with the ability "to fight dragons on equal terms." You’re destined to carry the fate of the world on your shoulders. The game is set in a vast open world, where players can explore endlessly, gaining valuable skills and items by discovering and completing side quests.

When I played Skyrim for the first time, ever, I used my quick wits and my sturdy weapon to escape from imprisonment and impending death. With the help of another fugitive, I soon entered the peaceful town of Whiterun. I was hungry; when we stopped at an inn, I picked up an apple, intending to pay for it with the few coppers I'd collected.

The innkeeper immediately screamed that he was being robbed, and rushed at me with a cudgel. Before he could brain me with it, I drew my sword and killed him. Then his family began screaming and attacking. I killed them, too.

Word spreads quickly among the twelve or so inhabitants of Whiterun. I fled into the wilderness—too late! The local constable raced from village to village, warning all of them that I might appear. Everywhere I went, I was driven out with blades and spears. Eventually, crazed with hunger and loneliness, I took my own wretched life and then uninstalled the game.

Taipan is a little known, mostly text-based game that was released back in the 1980s for Apple II series computers. The game is set during the Opium Wars; you're a captain and merchant with your own upgradable ship. You travel from port to port, trading your wares, while trying to avoid getting sunk by pirates or caught smuggling contraband.

At one port there’s a loan shark; he’ll give you startup cash if you agree to pay his ridiculously steep rates. When you pay him back, a little box appears on the screen, and you enter the sum you intend to repay.

I borrowed $2000 from Mr. X, as we'll call him. Later, flush from an opium deal, I repaid him. In fact, I overpaid, just to see what would happen. Sure enough, a negative balance appeared at once in my credit account. Then, a week later, the balance changed; it had grown a little. I was earning interest. A week after that, I was earning interest on my interest. Three months later, after accepting every overpayment I offered him, Mr. X was in a desperate situation. Our little account was getting larger with every passing day. It reached $100,000. I'll never forget the day, shortly thereafter, when Mr. X owed me a million dollars even. I stopped upgrading my ship. I never bought or sold opium again.

Oregon Trail is now famous for its depictions of dysentery, which were certainly chilling. In fact, as far as anyone knows, the game Oregon Trail invented the word dysentery, which, as euphemisms go, is a nice substitute for saying that your eldest child just shat himself to death.

Imagine you're a young, idealistic banker trying to realize some big dreams out West. You run low on food, which isn't a problem, since you can hunt for meat. If you happen to miss, you have a couple of hundred bullets to spare.

At first, the prairie is empty. Then, slowly, a buffalo emerges from the left side of the screen. It grazes thoughtfully on the pale tufts of grass until you shoot it in the head. Then a deer stalks slowly past you. BLAM! Dead! Then another buffalo. BLAM! It drops like the heavy sack of lean, flavorful meat that it is.

This is the moment when something strange happens, something you will only describe later as a sort of demonic possession. You have enough meat to last for weeks. Another buffalo peers warily out from the corner of the display. BLAM! A squirrel runs out of the woods into your line of sight. BLAM! Your wife tries to stop you, throwing herself between you and the animals. It's no use. In the half-light of the gathering dusk, the only sound is the dying cry of... the last buffalo.

LESSON: Nobody ever tells you that driving a species to extinction is a lot of fucking fun. Now I know exactly how we got down to zero dodo birds, one (aging) white rhino, etc.

Columns was a Tetris-like game. It ran on the Macintosh Plus that we had at home when I was in elementary school. It's so much like Tetris, in fact, that there isn't too much to say about it—except for one thing.

It had a dropdown menu item, under the File menu, that was simply called "Hurry! The Boss Is Coming!" If you selected this, your screen would immediately change to an image of a partially filled-out spreadsheet. This paused the game until, at your convenience, you were ready to resume it.

LESSON: One day, young man, you’ll have something called a "boss" and you will make things known as "spreadsheets." Every "spreadsheet" you will ever make will be somehow related to proving to this "boss" that you are very, very busy.

Everything is a game for the Playstation 4. The gameplay is very unusual. The player-controlled character can become anything you encounter in the course of the game—some 3000 different sprites, all of which are interactive and have unique properties. The interactive plants, creatures, cosmic objects, etc. are also all scalable. You can travel rapidly up or down in size, by powers of 10, as you gradually translate yourself from an entire waltzing universe down to a microscopic bacillus doing its own little funky dance. Everything in the game is connected; every tiny action reverberates outward through the entirety of the world. As you transform to explore every component and corner of this intergalactic ecosystem, you activate short clips of lectures and talks by the renowned philosopher Alan Watts. Some are poetic. Some are wise. Many are playful. All share in the joy of recognizing our place within a fragile and beautiful Whole.

LESSON: Hmmm. Well. This one's tougher. I mean, there probably is a lesson, but... I'm just not sure. According to the reviews, it's about the dangers of losing yourself in having, instead of reveling in being. Which is probably correct. There’s the critique of consumerism they mention on the back of the clamshell. I saw that and I was like, "I have to get this!"