The Technology Trap and the Future of Automation

If at some point fully automated luxury communism becomes feasible, why not explore it? 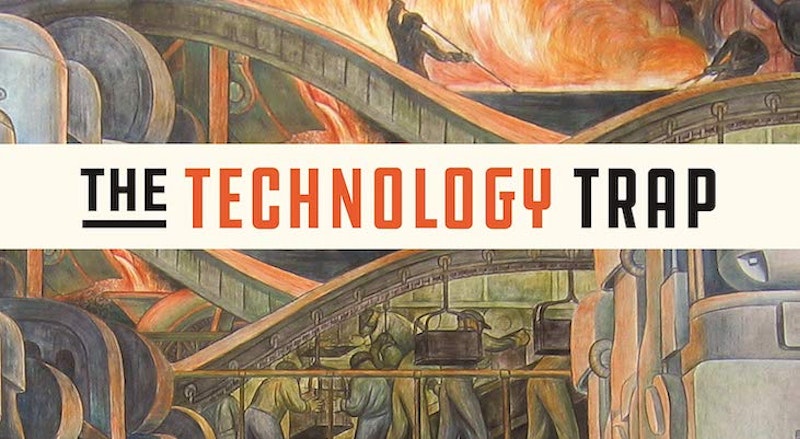 Several years ago, an economic study drew attention everywhere from The Economist to Last Week Tonight. Carl Benedikt Frey and Michael A. Osborne’s 2013 paper “The Future of Employment: How Susceptible Are Jobs to Computerisation?” tried to calculate how many different careers will be automated away in the near future. It concluded that 47 percent of American jobs are in danger. Now, six years later, Frey’s back with a book following up on the groundbreaking study.

The Technology Trap isn’t a direct successor to “The Future of Employment;” more like a prequel. It’s a study of how technology affected economic development in America and the UK, looking to previous eras for parallels to the present. Frey concludes the book with some policy proposals for the near future of AI and further computerization.

As history, The Technology Trap’s often fascinating. As a look into the future, it’s disappointing. Frey’s gathered a lot of research suggesting some useful ways to think about technology and work. But he’s reluctant to consider the possibility that even more profound changes might be coming.

It reads partway between an academic and popular work, oriented specifically to economic history. That’s as it should be given its subject, but art and culture get short shrift. It also means that contemporary politics are seen through the lens of economy and technology; so Frey argues that increasing American political polarization comes from the shrinking middle class, as opposed to the major political parties self-selecting on the basis of race and support for civil rights.

Frey doesn’t deal much with race. He discusses it in the context of support for Donald Trump—how could you not?—but then turns to the myth of economic anxiety driving support for Trump. “It is true,” he writes, “that Trump voters were a mixed bag, with an overrepresentation of high-income earners, but many economists believe that economic distress across working-class white Americans—those who have seen their jobs taken by machines or the Chinese—swung the election for him.” Economists are at odds with sociologists and much of the political analysis, and I’m not sure why I should believe the economists.

Still, as an economic study, The Technology Trap presents a recognizable picture of past and present. Frey notes that while the unemployment rate in the United States hasn’t increased, many men have stopped looking for work, and wages generally have dropped. Conversely, I wouldn’t have thought it needed to be pointed out that the Industrial Revolution was an awful thing for the working class who lived through it, however valuable it was in the long run. But then this is a book whose primary audience presumably consists of economists. When Frey compares the British Industrial Revolution with the Second Industrial Revolution in the 20th-century United States some interesting points arise.

The Second Industrial Revolution didn’t meet with the Luddite protests that the first one did. Americans might have occasionally griped about automation but also were proud of their country’s technology and of the future that was emerging. Statistically, technology was not costing jobs. Frey makes a useful distinction between replacing technologies and enabling technologies—between technologies that throw people out of work, and technologies that help people do more and better work.

Computers on the whole have acted as a replacing technology. A lot of the technologies projected to come into use in the next few years and decades look likely to be replacing technologies also. Frey argues that we’ve already seen some social impact in the form of social stratification, declining wages, and the resurgence of populism. So, he asks, what to do in the future?

I’m not convinced Frey answers that question effectively. The proposals he puts forward are a grab-bag of policies that aim to treat different aspects of problems he’s identified in previous pages. For example, noting that one effect of the skill gap computers have created is the clustering of jobs in a relatively few places, he suggests funding transport infrastructure and subsidizing people’s moving expenses so that it’ll be easier to pursue work in different places. But surely the psychological cost of moving makes this unworkable; not everybody wants to live a long distance away from family or in a potentially very different culture just to get work.

Frey’s skeptical of universal basic income schemes, but doesn’t entirely grasp how they work. He says that giving rich people money would be politically unfeasible, but the point of UBI as I’ve always seen it explained is that people who have or make money will have the income given to them clawed back in taxes. In other words, the rich won’t actually make money.

More broadly, he doesn’t address the question of the necessity of work as technology improves. That is, if technology can handle most or all of the routine work needed to keep society going—growing and distributing food, building houses, maintaining infrastructure— is there much point in maintaining our current attitudes to work and identity? If at some point fully automated luxury communism becomes feasible, why not explore it?

He points out that workers in the modern world tend to sit around, useless and depressed, when out of work. But that’s cultural, not innate—it might conceivably turn out to be easier to foster a new attitude to work, perhaps encourage people to take up some kind of art or self-expression, than to conjure up new jobs if technology starts eliminating them wholesale.

The question is, then, will the new technology be replacing technology or enabling technology? Frey argues that there’s no reason to think that the coming wave of machines will be more destructive of jobs than previous waves. This point needed to be developed. Frey’s arguing here against his own previous paper. If 47 percent of all jobs are eliminated, even it is slowly over the course of a couple of decades, there will be major social upheaval. We’ll need more than a few technocratic policies to avert it.

The Technology Trap has some useful ideas. But it doesn’t establish the direct relevance of the history it looks at to the future. It’s a good idea for a book, but in the end it just doesn’t go far enough.