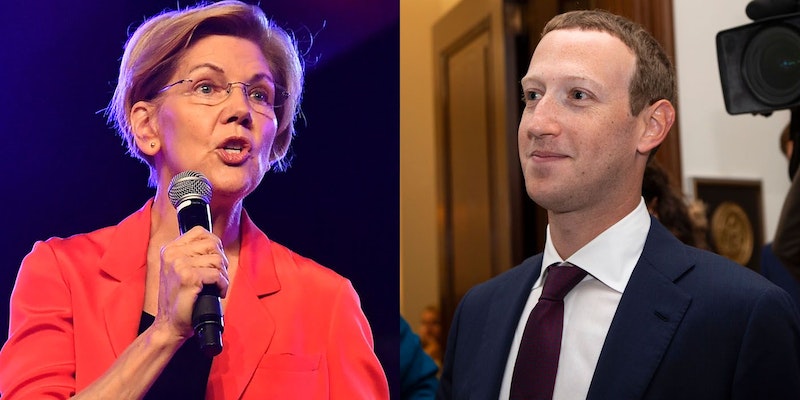 Mark Zuckerberg doesn’t want Elizabeth Warren to win the Democratic presidential nomination. He’ll “go to the mat” against her, and presumably for Trump, if Warren succeeds and doesn’t renege on her promise to break up, regulate, and prosecute Silicon Valley companies. Zuckerberg’s scared, perhaps even defiant, for him—as defiant as one could be on a booster seat. Like almost everyone else, he’s pretending that Bernie Sanders doesn’t exist, with no chance of winning the primary. Warren may focus on Wall Street and Silicon Valley more explicitly, but Sanders’ is a totalizing plan that covers all the issues Warren has laid out in her famous “plans,” which are all just glorified Medium posts.

“Elizabeth Warren, who thinks that the right answer is to break up the companies... if she gets elected president, then I would bet that we will have a legal challenge, and I would bet that we will win the legal challenge. And does that still suck for us? Yeah. I mean, I don’t want to have a major lawsuit against our own government… But look, at the end of the day, if someone’s going to try to threaten something that existential, you go to the mat and you fight."

Maybe Casual Friday, Steve Jobs’ jeans and turtleneck combo, and Zuckerberg’s ruthlessly bland and infantilizing uniform of the same t-shirt and hoodie has had more than a negative sartorial effect on our society. The idea that these companies can be trusted to self-regulate is absurd. Remember when Facebook lied about the inevitable “pivot to video”? Even Lindsey Graham, of all people, can see the light: “‘Why should we let you self-regulate?’ Senator Lindsey Graham demanded. A few moments before, he’d asked, ‘You don’t think you have a monopoly?’ Zuckerberg parried, ‘It certainly doesn’t feel like that to me.’”

Anybody would be better than this idiot. Do I trust the government to break up and regulate Facebook and Instagram? Depends who in the government is doing it. But the situation here is similar to the breakup of the Bell System beginning in 1982. Zuckerberg said on a hot mic, "It's just that breaking up these companies, whether it's Facebook or Google or Amazon, is not actually going to solve the issues. And, you know, it doesn't make election interference less likely. It makes it more likely because now the companies can't coordinate and work together."

Who’s working together? Why isn’t there any transparency? Why does Facebook need to have its own cryptocurrency? (As a Libra, I resent the name of their coin. Balanced and just does not describe cryptocurrency).

Zuckerberg on content regulators having nervous breakdowns and developing PTSD: “Some of the reports, I think, are a little over-dramatic. From digging into them and understanding what's going on, it's not that most people are just looking at just terrible things all day long. But there are really bad things that people have to deal with, and making sure that people get the right counseling and space and ability to take breaks and get the mental health support that they need is a really important thing."

Total fucking gibberish, just like Warren’s nonsensical backpedalling on Medicare for All. They’re more similar than they realize.

Zuckerberg allegedly refused to even consider selling Instagram and WhatsApp to ease pressure from politicians. Whether or not the government can successfully regulate social media giants is a good question, but Zuckerberg is clearly in way over his head and if he resented being dragged before Congress last year, just wait until his company is used once again to influence and sway elections across the world. Zuckerberg’s concern over Warren is unwarranted: if he paid any attention to the campaign day-to-day, he would’ve seen that she’s already begun to walk back most of her “radical” policies that she slyly adopted after Sanders made them popular.

If Warren’s already hemming and hawing over Medicare for All, I don’t trust her to follow through on her promises to prosecute Wall Street and Silicon Valley. She’s courting the #StillWithHer vote, and ultimately, they just want to see a woman in the White House. “Anyone but a white man.” It’s the narcissism of representation over material change. Zuckerberg should do a Bezos, get ahead of the story and endorse Warren. What could go wrong?