The Rise and Fall of Silk Road's Dread Pirate Roberts

Drama on the Dark Web. 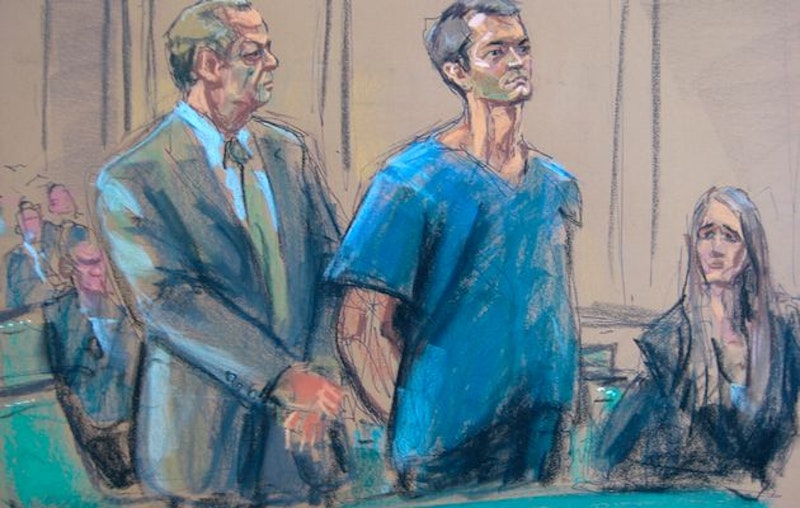 "I've had my youth, and I know you must take away my middle years, but please leave me my old age. Please leave a small light at the end of the tunnel, an excuse to stay healthy, an excuse to dream of better days ahead, and a chance to redeem myself in the free world before I meet my maker."

These are the words of Ross Ulbricht (whose online alias was Dread Pirate Roberts) in a pre-sentencing statement submitted after the kingpin of the now-defunct online drug dispensary Silk Road was convicted in February on seven counts, including conspiracy and money laundering. U.S. District Judge Katherine B. Forrest was unmoved by Ulbricht's eloquent appeal for leniency, sentencing him on May 29 to life in prison, without the possibility of parole.

It’s troubling enough that a 30-year-old yoga enthusiast and avid drum circle participant would be sentenced to die in a Federal penitentiary without being charged with one violent crime, in the most spectacular cybercrime trial ever held, but the disturbing and inexplicable elements of the case go well beyond the draconian nature of the sentencing.

Let's start with the two former federal agents—one DEA and one Secret Service—who investigated the Silk Road case and who’ve now been charged with cybercrimes themselves, including theft of funds they acquired as undercover investigators. The complaint against former DEA agent Mark Force says he tried to extort Dread Pirate Roberts on two occasions for a total of $350,000. Secret Service Agent Shaun Bridges is accused of trying to divert $820,000 in bitcoin used for the investigation into his own account.

Despite two rogue Federal agents having turned the Silk Road investigation into a side business for illicit profit, Judge Forrest did not see fit to grant Ulbricht a mistrial. No evidence of their crimes even made it into the trial. And then there's the matter of how the Feds found the Silk Road server in Iceland—the key to Ulbricht's prosecution—even though its location was protected by the formidable anonymizing software known as "Tor" on the "dark web,” the portion of the Internet that’s intentionally buried. The Feds had no warrant to enter the Silk Road website, and claimed they got into it through a software flaw in the login page, which gave them the IP address of a server in Iceland. Law enforcement agents sometimes lie, and the general consensus is that’s what happened here. Many speculate that the FBI either illegally hacked in with a brute force attack or that perhaps the NSA did the job for them. Whatever actually happened, if Ulbricht could do it all over again, he’d certainly place the server in a country hostile to U.S. law enforcement.

If the FBI had searched Ulbricht's house without a warrant, it would’ve indisputably been a 4th Amendment violation. It would seem clear then that the defense would dispute this illegal search of the Silk Road website and get all the incriminating evidence tossed—essentially ending the government's case—but it didn't happen quite like this. Judge Forrest ruled that Ulbricht's privacy hadn't been violated because he hadn’t claimed ownership by submitting a pretrial affidavit stating that the server in Iceland was his. This is where the mystery comes in. The necessary statement of ownership couldn’t have been entered into evidence at trial, thus alerting the jury that Ulbricht was indeed Dread Pirate Roberts. It could only be used to impeach the defendant's testimony if he chose to testify, which he did not. Ulbricht's high-profile lawyer, Joshua Dratel, was well aware of the situation and what was at stake, yet he chose not to submit the document. There's a very good chance that this was the worst mistake of his life, unless his client's conviction gets overturned upon appeal.

The families of people who allegedly (no hard evidence was produced) died from drugs procured on Silk Road spoke at a sentencing hearing, which certainly contributed to Ulbricht's life sentence, but is this relevant? The U.S. government seized the Silk Road server in June, 2013 and kept the business running as usual for another four months, during which time two overdose deaths occurred. Who's paying the price for that?

The most puzzling aspect of the Silk Road saga is how a promising, highly intelligent young man with a solid upbringing slid so precipitously into a moral pit to the point where he felt justified in paying for murders-for-hire—the Feds allege six—of Silk Road staffers and vendors. The government has Ulbricht's emails instructing others to "execute" and even torture his enemies for cash, though it looks like the acts were not actually carried out.

Ulbricht originally conceived of Silk Road as his contribution to a libertarian utopia—a place where consenting adults with bitcoin could purchase their drug of choice in a controlled environment, outside of the reach of the oppressive government. Silk Road even offered user reviews as a means of insuring product quality. It was to be the "anti-cartel" drug marketplace for the discerning buyer. At a certain point, however, the "hippie" part of Ross Ulbricht morphed into something darker and more sinister, although nobody who knew him would’ve ever guessed this.

When you try to hire someone to torture another human, you can no longer be considered an idealist, although Ulbricht fashioned himself as one. There’s nothing in his past to suggest that the Dread Pirate Roberts would be breaking bad not that many years after he became an Eagle Scout. He thought he had anonymity on the "dark web," but that's a myth. When the Feds want you badly enough, they'll find you, legally or not. Bitcoin is very traceable too. Now Ulbricht has the rest of his life to ponder every step along the way of his path to destruction. If he thinks long enough, he may be able to pinpoint that place in time where it all began to morally slip away for him. I imagine he’s already figured out that it's better to leave the drug dealing to the drug dealers though, all libertarian ideals aside.