Steamed Hams But It's a Splice Today Article

How one Simpsons scene became a meme. 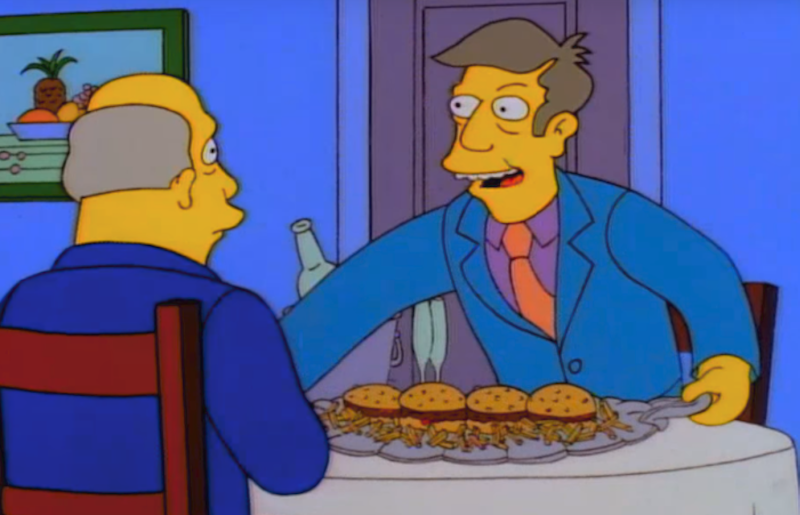 There's something to be said about The Simpsons. Despite the fact that it no longer has the same cultural influence that it once had, some of the older episodes are now enjoying renewed exposure online in the form of memes. An evolution of the YouTube Poop genre of videos, a scene from the 1996 episode “22 Short Films About Springfield” featuring a dinner between principal Skinner and superintendent Chalmers. This scene, originally conceived before the explosion of the Internet, has now been given a new life. In fact if one clicks on a Steamed Hams video, they can expect to have their recommended videos fill up with other Steamed Hams videos.

The scene plays off the character dynamics of the duo, where Chalmers is not quite smart enough to get hard evidence of Skinner's ineptitude, even though he does ask pointed questions. Skinner's botched dinner leads him to pass off fast food as a home-cooked meal. But the scene itself is chopped up, edited, and often completely recontexualized. One edit features a scene where all pauses in the dialogue are removed, another turns the entire exchange into a Metal Gear Solid cutscene. The scene serves as a base, a piece of footage around which the rest of these videos use as a springboard.

This is an interesting case, as The Simpsons was originally conceived before the Internet became a global phenomenon. While it has persisted beyond this context, it doesn't make the growing role of technology central to its premise; it remains a satirical look at middle class life in America. Even now, a huge show like The Simpsons has only just received a significant online presence. This may have to do with the fact that younger Simpsons fans have finally reached an age where they're now making memes and video mashups.

In a roundabout way, this is perhaps a measure of the cultural legacy of The Simpsons. While there are many who wish for the show to end, myself being one of them, I also understand that the impact of such a show can't be understated. Words like "embiggen" and "cromulent" have become part of our shared vernacular, a way in which people contextualize themselves. Its ubiquitous presence has reached the Internet, and now Skinner will serve Chalmers “steamed hams” as an evolution of our cultural vocabulary.