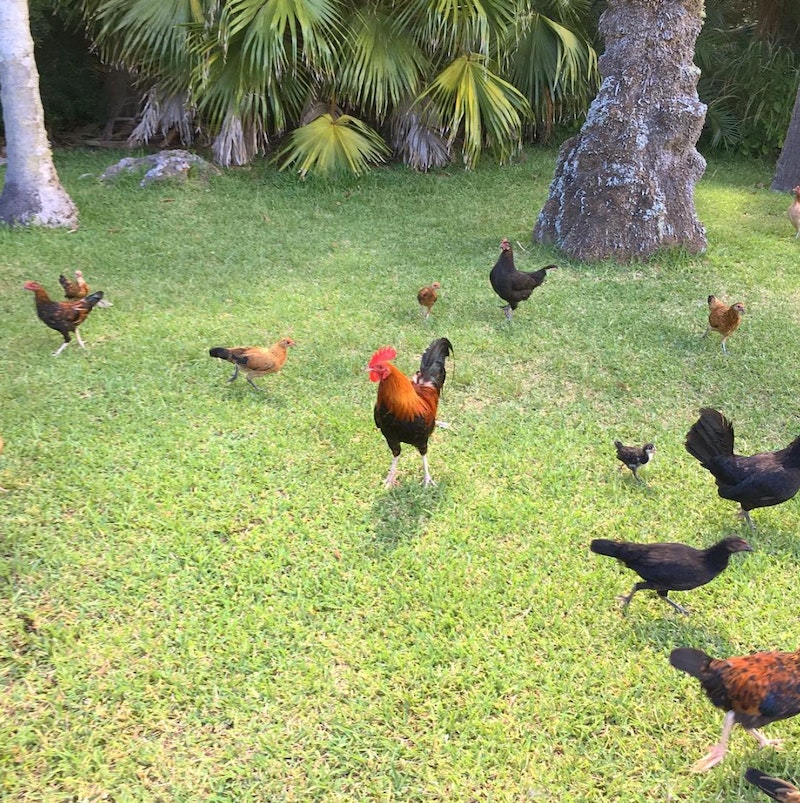 Marianne Williamson hasn’t posted a picture of me on Twitter yet. Why? I belong on her Twitter site. I’m a good bird: strong, red, vibrant in spirit and mane. Why hasn’t she spotlighted my feathers yet? Is it my expression? Do I come off intimidating? Am I too controversial to be tweeted about by a former presidential candidate? I think not. I’m a noble bird. I’ve never cavorted with flamingoes or penguins, dirty birds borne of filth and disease. Look at this fucking thing. How am I supposed to compete with that? Human beings are so superficial. They only like novelty, they’re only grabbed by what’s new and unusual. Doesn’t Dr. Williamson know that it’s not unusual to be in love with anyone?

I know why she hasn’t paid any attention to me: I’m a barn animal. A common, dirty barn animal, likely one she eats on a regular basis. Is she a vegetarian? A vegan? I don’t care. Any human being operating at her level is implicitly complicit in the crimes against aviarity—it’s telling that our equivalent word for “humanity” isn’t recognized by my operating system’s spell check. No matter: know you sick freaks know what we birds call ourselves and what we belong to. Not all birds are the same, in fact we’re all different, but we’re defined by our unity against the ground. This is where differences between other birds and me begin.

I can’t fly. Try as I might, I can’t pass the goalpost of a common pole vaulter. This is embarrassing for a number of reasons: my wife laughs at me, my cousin takes videos and posts them to TikTok, and even after hundreds of years of practice, I’ve gotten nowhere. How is this possible? I taught myself to write, read, weld, mend, shoot a gun, shoot heroin, fly a helicopter, have sex with a human woman, and long division. All it takes is time, and that’s something you humans don’t have in abundance. Thank God—although, sometimes I wish you did. Then perhaps you would be wise like us, the animals that have walked the Earth since Giza was free of pyramids and Jesus Christ (a friend) died on the cross.

I’m not asking for much. I’m just asking for some acknowledgement and popular engagement. I need to blow up on Twitter. I’ve never had more than 200 followers. Why? I’m smart, interesting, and often very rude. Isn’t this how you’re supposed to “present” on the social media website? I want to be the bird that makes Marianne Williamson go “I mean…” It’s some kind of toucan or parrot, I’m not sure, but we have similar eyes. My beak may be smaller, but should that matter? She’s posted hummingbirds and other inferior avians before. Is it my avatar? I can change it. This isn’t about anything other than attention, which I want, because I love Marianne Williamson, and I love her work.

I’m a spiritual bird. You have to be if you’re born with wings but can’t fly. It’s a bit taxing on the self-esteem, which I didn’t even know existed until the 20th century. I wish I could go on a big adventure like Bennington… his time unchained sounds so fun… maybe I’ll visit him someday, against his will… maybe… what’s done is done… I’m beginning to think that the realignment after World War II was a mistake. Maybe I should’ve lived as a peasant in Soviet Russia, or a noble servant in the dregs of East Germany. Monica and I chose freedom, but freedom has its own jungle law, and right now, I’m losing. I can’t get any attention on the Internet and it’s driving me insane. Marianne Williamson, please, what can I do to get you to notice me?