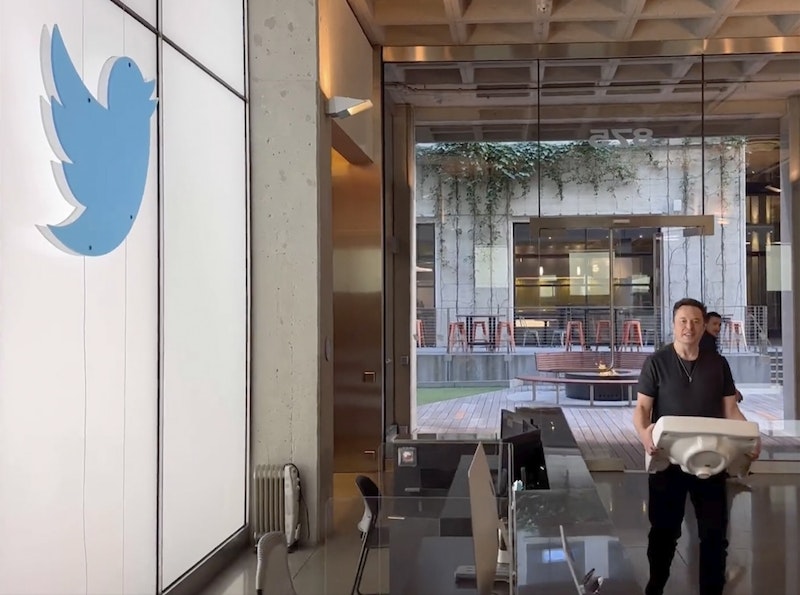 That Elon Musk, entering Twitter headquarters as its new owner, brought a porcelain sink and waved it around was—typically of the man—surprising, charming, and ultimately puzzling. "Entering Twitter HQ – let that sink in!" he tweeted, chuckling at his own hilarity. “Everything but the bathroom sink,” if that was the idea, wasn't quite hilarious enough to make sense. What it did do, however, was “trivialize” the event: it constituted a little bit of whimsy to counter the bizarre solemn panic with which Musk's acquisition has been greeted.

It seems clear to many that Musk has a right-wing agenda that’s now going to infiltrate Twitter and, through Twitter, the world. But it's hard not to see that the panic is hyperbolic and speculative. Chill and see what happens, is my advice. We can afford to because Twitter isn’t a necessity. Alternative means of communication are available.

Greg Sargent's approach in The Washington Post is typical of the hypothetical hyperbole, and alleged trauma, that Musk's hijinks engender. It's obvious to Sargent, as to many others, that if Musk's Twitter relaxes content moderation, then white nationalist hate speech, QAnon-type conspiracy theories, and provocations to violence of the sort that saw Paul Pelosi attacked with a hammer the other day, will increase. Words have consequences, after all, and there must be accountability.

I wonder whether this theory has any empirical basis, or whether any of its advocates are willing to put it to empirical test. I think that it’s already being shown to be bogus, even as it continues to provide justification for silencing people. So, between 2016 and 2021, Twitter, Facebook, and the other large social media platforms radically increased content moderation. By 2021, Facebook was spending billions and devoting tens of thousands of employees to such matters.

There is far, far less hate speech and conspiracy-mongering on Twitter now than there was 10 years ago. It’s far more regulated. Post or re-tweet something anti-Semitic, as Kanye has been known to do, and they’re very likely to pull you down quickly and suspend you. Praise the January 6 rioters, or declare the 2020 election was stolen, and you're not long for the platform. If you’re spouting QAnon, you’ll very likely get pulled down and suspended from, let's say, any of the top seven social media sites.

If circulation on social media were the driving force in spreading conspiracy theories, as everyone appears to agree, then we’dexpect that radically curtailing their expression on Facebook, Twitter, and Instagram would reduce their popularity. For many or most commentators, "the internet" is a sufficient explanation for the false beliefs and the perverse opposition of people on the other side.

Sargent's argument for—what?—nationalizing social media platforms is a sheer tissue of speculations and fallacies. Here he's quoting Georgia State communication professor Mia Bloom: “'A Twitter that decreases content moderation and does not clamp down on disinformation and propaganda could advance Russian aims in Ukraine,' Bloom told me, noting that it could also aid other rising authoritarian movements. If Twitter permits more violent content, Bloom says, it could whip up violence against ethnic and religious minorities around the world and facilitate other persecution, such as the campaign China is carrying out against the Uyghur Muslims."

Now, if you think these are substantive reasons to regulate, seize, or close Twitter, I think you should read that again. The argument, winding through “expert” mumbo-jumbo, is that Musk's acquisition of Twitter could eventually exacerbate the Chinese government's oppression of Uyghurs. I think if people like Sargent weren't working each other up into a hallucinatory tizzy, they'd see that they really aren't making any sense. But any argument, no matter how weak, is evidently a good enough argument for crushing Twitter.

One thing that happened during the Trump era is that the left came to think that the key to the future was constraining the communication of their opponents. The desirability of removing people such as the president of the United States, or the psych prof Jordan Peterson, from social media, went from being controversial to allegedly obvious. Permit me to wonder if the limits-on-communication consensus has actually improved things. And permit me to wonder whether the Twitter censors and social-media panickers care about that, or only about insulating their little shell-like ears from bad words.

Meanwhile, Musk is likely to be playing around with some pretty interesting ideas. Maybe users could more or less specify the level of insult and the sorts of disagreement they can tolerate. Perhaps pairs or groups of people can engage in Twitter battles, either for their own edification, or for spectators. Or maybe Twitter won’t look that much different a year from now.