Exploring The Why Files

The X Files was popular with the college-educated “smart” crowd, and The Why Files outright sells itself as appealing to the same type. 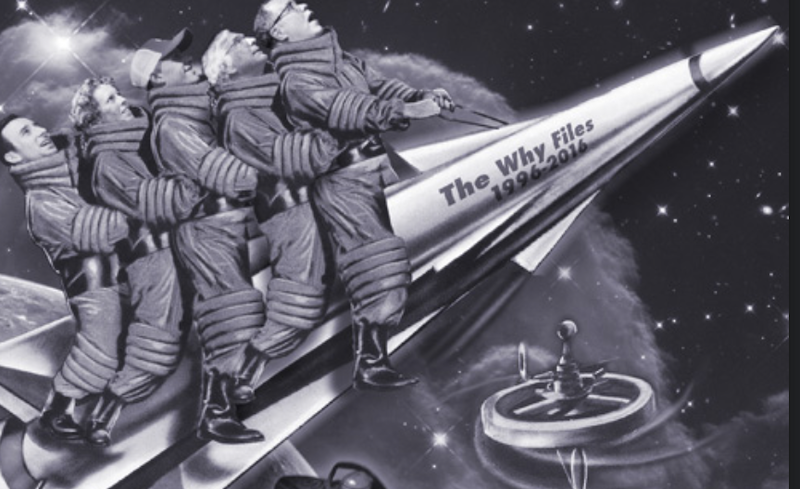 The algorithm for my YouTube viewing works such that about three or four clicks in, I get videos from the “weird” part of YouTube, usually involving UFO ephemera. I must’ve clicked on too many Joe Rogan clips. Which makes me wonder why I haven’t had The Why Files recommended sooner, since it’s a channel which started two years ago, and has gained an underground following, some videos earning over a million views. Not that The Why Files is that weird—it does deal with, mostly, unexplained phenomena, though can veer into straight-up history. The name’s a play on the popular tv show The X Files, which concerned, fictionally, some of the same phenomena, and to which it owes a huge debt—The X Files was popular with the college-educated “smart” crowd, and The Why Files outright sells itself as appealing to the same type.

What helps The Why Files—which is also a podcast—rise above similar channels is the production, especially the editing. Each video averages 10 to 20 minutes, and has “chapters” or “segments,” including an intro giving a brief—though usually engrossing—summary of what’s to come. Most importantly, each break almost always ends in a mini-cliffhanger, ensuring that viewers will stick around, and watch to the end. This editing skill alone puts The Why Files up in quality to some high-end tv shows, and I wouldn’t be surprised if they get an offer to expand the show onto the Discovery Channel or History Channel. These cliffhangers are also a sign of good writing. In addition, the ending segment usually debunks the scary or weird purportedly true story that’s just been revealed. Or, debunk as much as possible. Sometimes the weird and unexplained remains weird and unexplained.

The host and creator (and writer and editor) of The Why Files, AJ, has onscreen charisma. Handsome, usually unshaven, but with perfect hair, he’s smart, well-spoken, and funny. Like the X Files character Mulder, AJ “wants to believe,” but like Mulder’s counterpart, Scully, he has a healthy skepticism. He does his research, but he also seems to have grown up reading about and watching (and listening) to tv and radio shows about many of these topics. Another of his influences, whom he discusses in the ending segment of the “Hole To Another Dimension” video, is Art Bell, the famous late-night AM host of the show “Coast To Coast,” who indulged in all kinds of conversations and stories with callers. I also think AJ has more than a little Rod Serling in him, the creator/host/writer and the classic tv show The Twilight Zone.

The genius of The Why Files is Hecklefish, a computer-animated goldfish who hovers in a goldfish bowl next to AJ in every video. Hecklefish becomes the “voice of truth” (if not reason) of the show. AJ plays the straight man to Hecklefish’s outbursts, which can consist of loud criticisms about the government, the CIA, “lizzid peeple” and anyone else who’s lying to us. Hecklefish is also the emotion of the show, either with his humorous sidecracks and bad puns—and bad singing—to his screams of fear at some of the more startling things revealed in AJ’s narration.

Hecklefish is a simple computer generation, with flowing fins, but with the relatively low-tech effect of a human mouth inserted onto the fish body. I used to think Hecklefish was female, with the high—indisputable Jewish—voice, he reminds me of Joan Rivers. I’ve ended up conceding that Hecklefish is male, though really it doesn’t matter—the important part is his ribbing and criticism of AJ, and everything else. The dynamic is another testament to AJ’s writing and acting skills (unconfirmed, but I think AJ does Hecklefish’s voice, though the editing is so good they really do sound like two distinct people interacting during each video).

The Why Files has a loyal fanbase (there’re Hecklefish tees and hoodies). The setting doesn’t vary much, with AJ sitting at a desk, waist up, and Hecklefish to his left. Each video has the same format: intro, narrative of the “story,” with a debunking session section at the end. It’s these final sections where AJ sometimes gets personal, sharing connections to the topics, and/or what he himself has learned in working through the research (which is more along the lines of don’t trust the government or MSM). I can’t quite figure out if AJ is more libertarian or some kind of far/post Leftist. Again, it doesn’t matter except to highlight how the supposed “cranks” from the Right or Left hold a more healthy skepticism than anybody from the center.

The Why Files is a history channel—viewers will learn facts like the CIA experimenting on Americans without their consent with, among many, the MK-Ultra Program (“The CIA Murder that Exposed MK-ULTRA: The Frank Olson Assassination”). Which leads to the question, what is the CIA up to now? While the most popular videos are about UFOs and aliens (like “Alien War and the Horrors of Dulce Underground Base”) there are more “straight” videos, about math (“Math Facts for Brain Muscles“) and the possibility that the Welsh arrived in North America long before Columbus or the Vikings (“Legend of the Moon Eyed People: America’s First Civilization”). The Why Files is smart, and makes viewers feel smart for watching it.