The voice of the Great Mighty Poo. 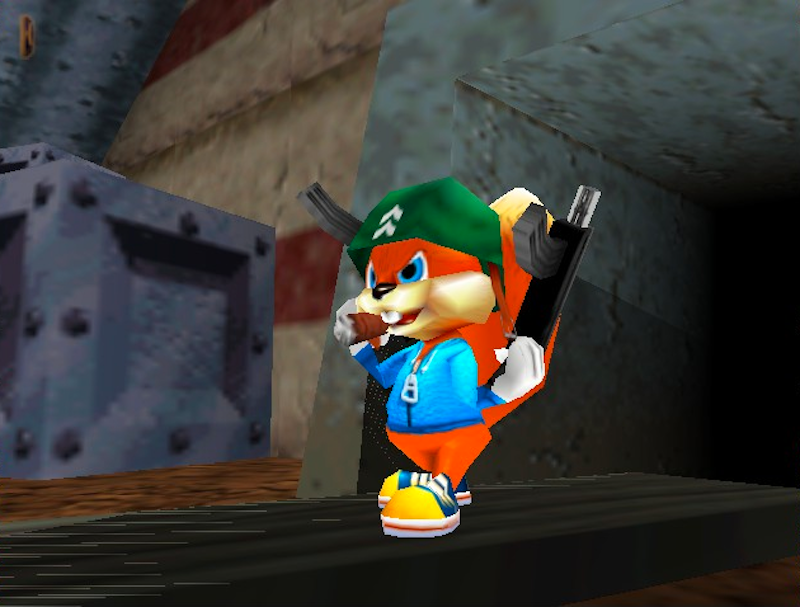 On Conker's Bad Fur Day— a raucous, 2001 game in the spirit of South Park—Chris Marlow is best known for his voice work as the opera-singing Great Mighty Poo. Of course, he was also a programmer on the project, helping bring the classic title to life behind the scenes. In this interview, he talks about his early coding, the grueling development of Conker's Bad Fur Day, his current projects, and much more.

SPLICE TODAY: How did you get into programming?

CHRIS MARLOW: I got a ZX Spectrum for my birthday when I was 11, which I loved. My first four games were Ultimate Play the Game titles. I learned to program BASIC on it. I used to get the Spectrum gaming magazines, and type in the code they had in them for simple games. These were usually in BASIC, sometimes with hundreds of lines of hex numbers! I moved on to use White Lightning—an assembler/disassembler—and some graphical adventure game makers. I progressed to an Amiga, and finally a PC at university, where I studied computer software technology in the School of Mathematics at Bath University. I built my skills in C/C++, along with the physics and mathematics needed for video games. After university, I went for an interview at Rare and got the job. I've been there for the last 20 years!

ST: Were you happy when Conker transitioned from a family-friendly game to a more adult-oriented project?

CM: We’d worked on Twelve Tails for two and a half years, and although proud of what we’d achieved, the market for those sort of games was becoming saturated. It didn’t stand out enough. When Chris Seavor took charge of the project, and it lurched in a new direction, the whole project felt fresh again. It started by just being funny in a different way—a beehive that shot the wasps. We added movie parodies, more bawdy humor, and every day it got better and better.

ST: You're a trained opera singer. Was the Great Mighty Poo role written specifically for you?

CM: Yes, Chris Seavor and Robin Beanland—our on-team musicians—both knew I performed in opera. Chris always knew to leverage t he talents of his team members, and came up with an idea of a boss who’d sing opera. Robin designed a tune that would work with the gameplay, and came up with the lyrics. We recorded it in an afternoon.

ST: Besides working as a voice actor, what were your responsibilities during the making of Conker's Bad Fur Day?

CM: I was a programmer on the project, initially working on special effects, then on the animation system, Conker's procedural tail, facial expression code, and the cutscene editor, which allowed all the terrific cutscenes in CBFD to be created by the artists. I set up the system for attaching objects to Conker's hands, and had my fingers in all sorts of other areas of the game.

ST: Do you have any particularly fond memories from the making of Conker's Bad Fur Day that you’d be willing to share?

CM: I do look back on that time with fondness. We worked insanely long hours for many years, but the team came through it forged out of iron, and very close. By the end, we could make that game do anything! We always looked forward to the latest cutscene audio to be delivered, which we’d listen to and roll around laughing. When the cutscenes were made, we’d watch them together too. The [team's development] barn was often full of laughter. The rest of the time it was full of swearing, but that’s to be expected in such a pressured environment!

ST: Did you and the rest of the team know you were creating something that would come to be regarded as a cult classic?

CM: We knew we were creating something everyone on the team loved to make. And if we were loving developing it, and found it funny months and months later, then the game-playing public would love it too. It was unlike anything that anyone had ever seen or played before—a unique thing to develop. Everyone on that team still thinks proudly of it today. Whenever we showed anyone parts of the game, we got the same shocked, delighted reaction. This helped us to put in those hours, and make it the best we could.

ST: What do you think made Conker's Bad Fur Day so special? It's not every game that—over 15 years later—fans talk about with such affection.

CM: The game was so unique, so unlike anything that’s been before or since. If we knew what it would be by the end and had to pitch it in a meeting, it never would’ve been made. It sounds like a mad idea. We just did what we wanted, pushed every boundary, and didn’t ask permission or forgiveness. Other than having to trim the odd thing, almost everything stayed in. It was something naughty for kids to play and feel like they had experienced something special. It was something for adults who had grown up with Nintendo—for the first time a game had grown-up with them. It was like a secret club of people who had experienced something very different. The movie parodies were so much fun to spot. And fundamentally, the game’s a blast to play. The multi-player alone is a treat, with unusual play styles, and humor. The team is as affectionate about the game as the fans. It's something special.

ST: Will there ever be a true sequel to Conker's Bad Fur Day?

CM: Conker is Chris Seavor, and I find it hard to imagine it’ll ever happen without him. But he’s no longer at Rare, and is busy working on games at his own company, Gory Detail. A sequel could be made, and there are so many new movies to parody, but it’s like catching lightning in a bottle. CBFD was a moment in time. I'm not sure the magic could be successfully recreated, as the world has changed.

ST: What are you currently working on for Rare?

CM: I’m working hard on the pirate-themed, shared-adventure game, Sea of Thieves. I'm prototyping gameplay features for it. The game’s so much fun, and has the potential to be something really, very special. It’s another unique project, unlike anything I have worked on before. If we get this one right, it could be massive!

CM: Every year I’m so pleased to learn new people are discovering Conker's Bad Fur Day for the first time. YouTube playthroughs allow me to see people reacting to it with fresh eyes. People upload videos of them singing the Great Mighty Poo song, orchestral arrangements, and other fun, creative ways of reimagining it. CBFD is a project I’ll always be proud of. To know it has a special place in people's lives, and in videogaming history, is fantastic.

*Author's note: Marlow would like to mention that Beanland is also working on Sea of Thieves for Rare, while Seavor is working on The Unlikely Legend of Rusty Pup for Gory Detail. Conker's Bad Fur Day is one of the 30 games available on Rare Replay for Xbox One.