One of LA's best-known landmarks. 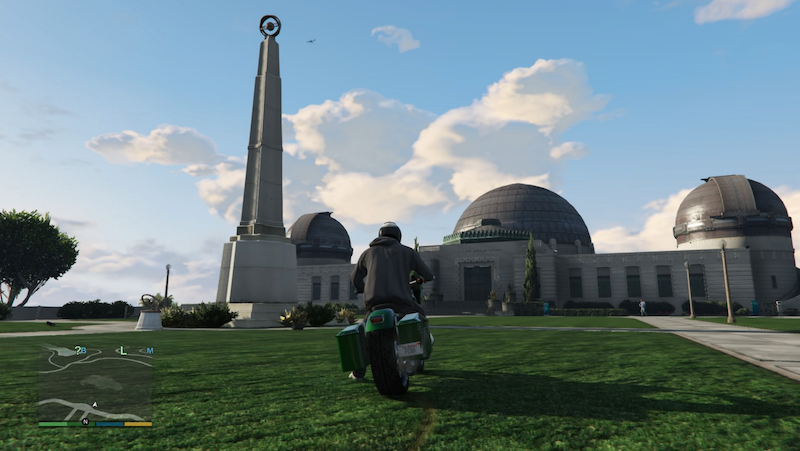 Recently, while playing Mafia II—2K Czech's underrated crime game set in the 1940s and '50s—I was struck by a sense of déjà vu. I was in the midst of a mission that required fighting through an army of gangsters, who were hiding out in what the developers called Zavesky Observatory. There was something about the domed, Art Deco building that felt familiar. Mafia II's Zavesky Observatory was based on the real-life Griffith Observatory in Los Angeles.

Architect Brenda Levin, who led an effort to restore and expand the Griffith Observatory in the early 2000s, said the structure was "probably the most recognizable and beloved building" in the city. The landmark’s been featured in many films, including The Terminator and La La Land. Perhaps most famously, it was the planetarium James Dean's character visits on a class trip in Rebel Without a Cause.

To an untrained eye, both digital buildings appeared surprisingly faithful to their real-life counterparts. For instance, both featured a version of the Astronomers Monument, topped with an armillary sphere, on their grounds. But there were slight differences. Neither included sculptures of the astronomers who gave the pillar its name. According to the Griffith Observatory website, the actual monument was designed by a local artist who built it using materials donated by the Women's Auxiliary of the Los Angeles Chamber of Commerce. One of the assisting artists also designed the Oscar statuettes—which look similar to the sculpted astronomers.

In Mafia II, a plaque at the Zavesky Observatory suggests the planetarium was named after Peter Zavesky—who, we're told, lived from 1850 to 1911. This tracks fairly closely with the lifespan of the Griffith Observatory's namesake, mining magnate Griffith J. Griffith (1850-1919). Less similarly, the Galileo Observatory was built at the end of the 19th century, according to the Grand Theft Auto V manual. This would mean it was constructed prior to the rise of the Art Deco movement, styles of which the building showcased! For its part, the Griffith Observatory was built in the early 1930s, a project of the Works Progress Administration.