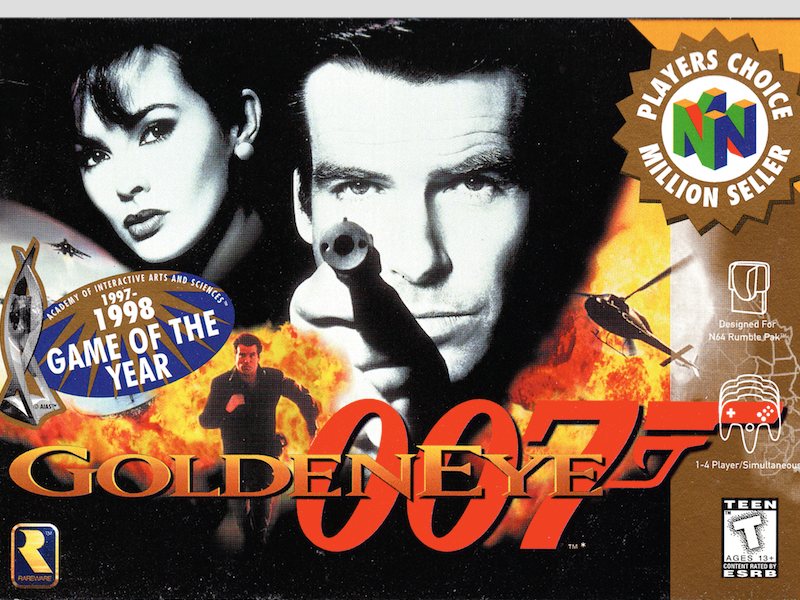 The Nintendo 64 was the first current-generation console I owned. I'd previously had a hand-me-down Sega Master System, but it was the N64 that really made me fall in love with the magic and possibility of gaming. It remains my favorite console. The lifespan of the system—from 1996 to 2003—was the period in which I was most in tune with the gaming world. Below are my 10 favorite titles for the N64.

10. Banjo-Kazooie—Rare's immensely charming, 1998 platformer starred a bird-and-bear duo. Writing for IGN, Peer Schneider gushed, "Everything, no matter how small and seemingly unimportant, has been tackled with extensive detail and that's one of the reasons why the game is in a league of its own." The Academy of Interactive Arts & Sciences named the title winner of its awards for Outstanding Achievement in Arts/Graphics and Console Action Game of the Year.

9. Star Wars: Shadows of the Empire—Set during events of the original film trilogy, LucasArts' third-person shooter was released in 1996. In a critical review for Gamespot, John Broady conceded, "The game's ambiance is often remarkable; at times you truly feel you are lurking in the bowels of the Empire's darkest corners. Confronting lifelike Stormtroopers is a treat."

8. Mario Kart 64—Developed by Nintendo, this 1997 racing title hit shelves shortly after the N64's release. Schneider quipped, "Mario Kart 64 is a must-have. The only draw-back is that you'll be speaking with Italian accents before long."

7. Super Smash Bros.—HAL Laboratory's 1999 game was the first entry in the fighting franchise, which pits videogame characters from different series against each other. Writing for Gamespot, Jeff Gerstmann said, "If you've got a crew of friends ready to pick a Nintendo character and throw down, then Super Smash Bros. is definitely worth a purchase."

6. Super Mario 64—A launch title for the N64, the revolutionary platformer was developed by Nintendo. Writing for IGN, Doug Perry exclaimed, "Not only does the game obliterate every platformer before it in terms of visual finesse, it plays just as well if not infinitely better than previous 2D incarnations of the Mario franchise."

5. GoldenEye 007—Developed by Rare, this 1997 James Bond game is one of the most celebrated first-person shooters of all time. Gerstmann raved, "The sheer joy experienced by putting a bullet in some Russian's head with the sniper rifle, from 200 yards, never gets old, and the countless mission objectives spread across 12 different environments and three difficulty levels ensure that the game has the staying power of—dare I say it—Mario 64." The Academy of Interactive Arts & Sciences named it winner of Interactive Title of the Year, Console Game of the Year, Outstanding Achievement in Software Engineering, and Console Action Game of the Year.

4. Tony Hawk's Pro Skater—This 2000 Neversoft title is the debut entry in the popular sports franchise which takes its name from the former skateboarding champion. Gerstmann said, "Even after completing the game with all the skaters, you'll still want to go back and do some free skating. It's one of those games that will keep you coming back long after you've mastered it."

3. The Legend of Zelda: Majora's Mask—The 2000 follow-up to perhaps the most beloved title in Nintendo's Zelda series took a surprisingly grim tone. In a review for IGN, Fran Mirabella III declared, "Put simply, you won't be disappointed with what you see. Majora's Mask has been polished and shined in a lot of areas, and nearly uses all of the N64's resources." The Academy of Interactive Arts & Sciences named the title winner of its awards for Game Design and Console Action/Adventure.

2. Conker's Bad Fur Day—This 2001 game, published by Rare, is one of two titles here which would unquestionably be on my list of the greatest games of all time, regardless of system. Writing for IGN, Matt Casamassina said, "Not only is it quite possibly the most hilarious title ever created, but the selection of crude jokes, over-the-top violence and sexual content featured is only one-upped by the game's remarkably deep, well-paced level design, tightly knitted control mechanics, beautiful graphics and amazing sound quality."

1. The Legend of Zelda: Ocarina of Time—The 1998 classic from Nintendo is my favorite game, bar none, for any console. Schneider proclaimed the title "should be recommended playing for ever aspiring videogame designer and programmer out there. If you're making games and you haven't played this game, then you're like a director who has never seen Citizen Kane or a musician who has never heard of Mozart." The Academy of Interactive Arts & Sciences named the title winner of its awards for Game of the Year, Console Game of the Year, Outstanding Achievement in Interactive Design, Outstanding Achievement in Software Engineering, Console Adventure Game of the Year, and Console Role-Playing Game of the Year.