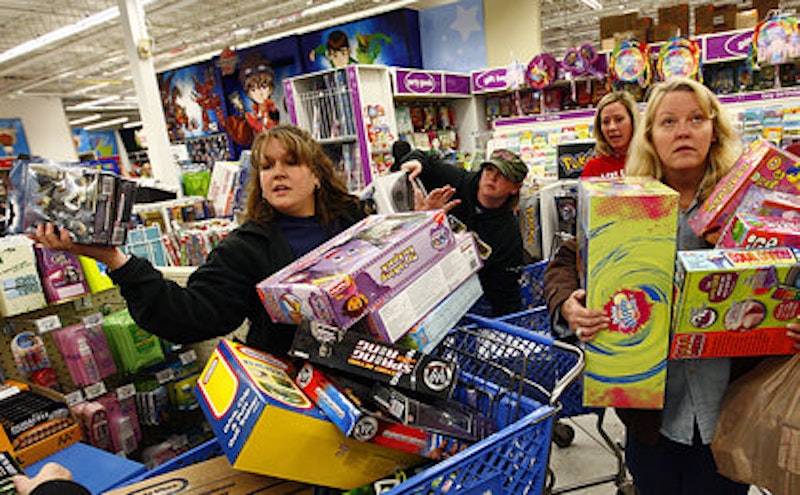 The past two Black Fridays have kept me from my loved ones so that others are able to save 50 cents to a dollar on box sets of their favorite TV shows. Instead, I ate cold Chinese food alone on the couch and watched reruns of Parenthood. While myself and countless other underpaid and overworked customer service workers, were toiling, those fortunate enough to have the Thanksgiving holiday off were gearing up to feed into the myth that is Black Friday. Some will say that if I hate working on Thanksgiving and Black Friday so much that I should find another job. This is such a flippant retort to everyone who must work in order to keep his or her jobs. Do people honestly think that anyone would choose to make lattes or ring up your $1000 clothing purchase instead of gathering around a table with those they hold dear? What’s even worse about Black Friday culture is that contrary to popular opinion, Black Friday no longer refers to the mega-profit stores that took them out of the red and into the black.

Now, stores aren’t even waiting till Friday, opting to open later on during Thanksgiving Day. Long before workers have had time to digest their meals, they’re forced back to jobs because people cannot stand the idea of not being able to spend money for a full 24 hours. “Gray Thursday,” as it’s now called by retail market, is when stores such as Target re-open at five p.m. Thanksgiving Day so that people can get a leg up on their Black Friday shopping. “Cyber Monday” has also put a damper on the number of those turning out for Black Friday door buster deals because people are realizing they can get better deals sitting at home than they will from waiting out in the cold for Wal-Mart to open.

In 2013 an eleven year old girl was trampled in a Wal-Mart because people are animals. This macabre website lists all the deaths and injuries that have occurred on Black Friday, which makes me wonder why anyone in their right mind would court physical danger. There are fights, arguments in the store aisles, and even a website dedicated to the “12 Best Black Friday Fight Videos.” Nothing gets people more in the Christmas spirit like giving each other knuckle sandwiches in front of impressionable children over a “hot” toy. Black Friday is a tradition when grown men are video taped kicking the shit out of women over a flat screen TV and society approves.

Thankfully, some have agreed to take a stand against Black Friday. Most recently, in solidarity for Michael Brown, people are agreeing to walk through stores and clog them without buying a single item. Other groups have banded together to walk around megastores such as Wal-Mart in a conga-line of shopping carts without anything in them.

Black Friday brings out the darkest part of humanity. The holiday season is used an excuse to push people who already work extremely hard to give up days that remind us all of the love we’re surrounded by. Ultimately, by shopping on Black Friday you’re giving a thumbs-up to a culture that values profit more than the mental and physical well-being of those who work to keep the retail market churning. I have no respect for those who shop on Black Friday because they don’t respect those who have to work that day. It’s a reminder from the privileged that their time is more valuable than others, and that their families are more important.