Welcome to the Wal-Mart Jungle

Kill them with kindness. 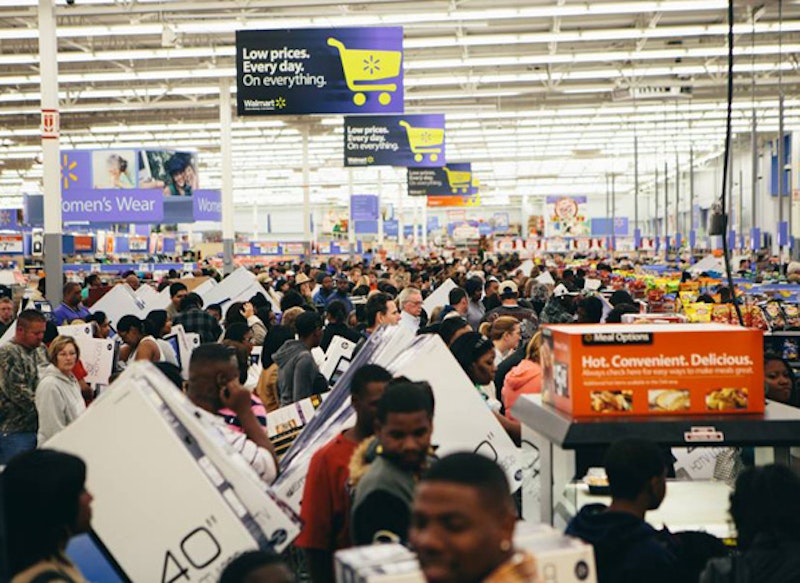 This year, for the first time, I agreed to join friends for their Black Friday shopping excursion. I just got an apartment in Baltimore and figured that the Wal-Mart horror stories would be worth getting a few essentials for half price. I was wrong.

The parking lot was so full that people used the lawn next door. We decided not to maneuver through traffic and slowly rolled our little Mazda into the grass. We shuffled into the store, which looked suspiciously calm outside. As soon as the sliding doors opened, we felt the briskness of November give way to warm, dense air that was due to the thousands of humans packed inside. The sounds of people sighing, carts colliding, laughter, and arguments were louder than the Christmas music blaring through the speakers. We found exactly one cart at the entrance, grabbed it, and moved through the initial crowd with reckless abandon. There was nasty language exchanged as we accidentally bounced the corner of our cart against bellies and bumped into huge televisions.

After a few minutes I got the hang of it. When a woman made a scene of my cart being in the middle of the aisle, I let her call me a dumbass and then sincerely apologized. I said, “Excuse me” a lot, and used all the manners my mother and kindergarten teacher taught me and killed those fanatic shoppers with kindness. Did I miss out on any of the sales? No. I got my set of kitchenware for 50 percent off before it sold out, and I never had to body-slam anyone to get it.

After waiting in line for a while and rushing outside for fresh air, we meticulously forced each of our purchases into the tiny car. I sat with a set of mugs at my feet, my arm around a stainless steel trashcan, and a basketball immediately behind my head. We were buzzing the whole way home from the excitement that ensued that night at Denton’s Super Wal-Mart, and slept well.

I’m not sure if I’ll do Black Friday again, but with the holiday season in full gear it reminded me of an important lesson. There’s no sense in badmouthing someone who accidentally runs over your foot with a cart or lunges for the same Rachael Ray cookware as you. It’s much easier to laugh and forget about it.