He Never Wants to Retire 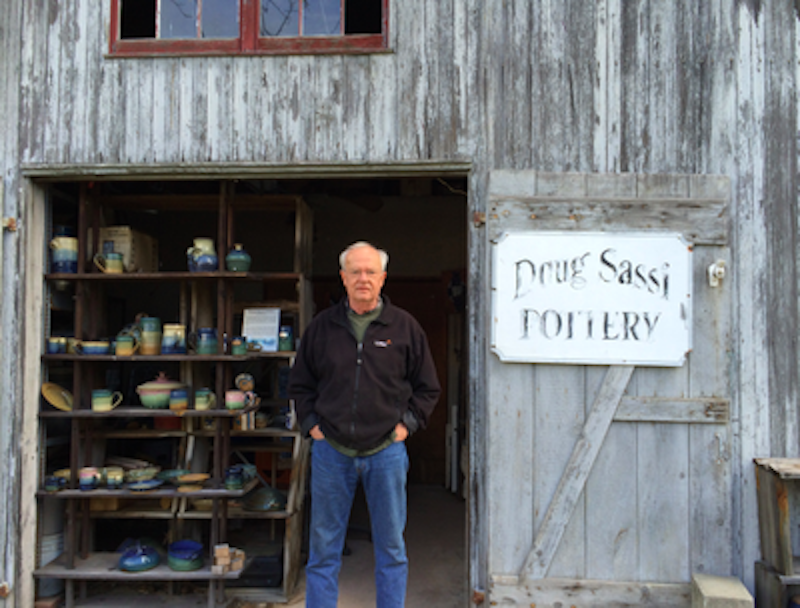 When I first moved to Maryland’s Eastern Shore in 2001, I searched online for a nice beach park for the kids. I found a place in Kent County called Betterton Beach, and on the way there went through a town called Still Pond. The place had a great country store where the kids loved to get ice cream, and a historical marker exclaiming “Maryland’s First Women Voters”—in 1908, 12 years before women’s suffrage, Still Pond was the location where 14 women, including two African-American, voted in the municipal election.

About 50 feet from the roadside marker lives the couple who rallied to put it there. Doug Sassi has been a potter since the 1960s. He has masters’ degrees in art history and ceramics, and every day for over 50 years, he walks to work right across the street from his house and creates art in the form of pottery. He invented a particular type of clay himself over the years of trial and error, and enjoys mixing the vats of natural materials. “I’m like a little kid,” he says, “I still like to play in the mud.”

The day I took the kids to the beach nearly a decade and a half ago, I stopped on the roadside to visit the pottery shop and ended up buying a coffee mug. I’ve returned over the years to replace broken mugs and buy new ones, and will only drink coffee out of Doug Sassi mugs. They’re just shaped the right way and once you find a mug that fits in your hand, there’s no better kind. Sassi also adds thumb rests, making the cup a more natural fit when you hold it.

He makes other things too—platters and saucers and teapots and soup bowls, but he says that mugs are the most popular. He’s lost count of how many hundreds of items he’s made over the years, and you can't buy them new online, though he's thinking of putting up an Etsy shop. He tells a story of a guy pulling up in a pickup truck with a mug in his hand and walking up to Doug. “You the guy who made this mug?” he said. “Well, yes,” said Sassi, “You need another one?” “Nah,” said the guy. “I got it at a yard sale and I thought if you was dead, it might be worth somethin’.”

I stopped by the studio recently because one of the kids had done what kids do and dropped (versus placing) my mug (which they’re not even allowed to touch) into the sink, cracking it. Still holds coffee fine, but it’s my favorite, and I wanted to replace it. I’d been looking for the particular shape over the years at the shop, but hadn't seen it. I asked him about it this time, as I browsed around the small shop in his home; the smell of his wife’s soup cooking filled the air.

“I made that shape as a special request once,” he said, “and only really made the one batch.” Inwardly cursing my kids, I picked out two more mugs though they weren’t my preferred rounded shape. He told me to send him a photo of the mug and he’d be happy to make another batch. I said I’d pre-order some. We walked across the street to his studio, a weathered painted barn, where some sample shelves of handmade goods announce the interior workings. I spot a miniature version of my favorite rounded mug.

He explains, after turning it over in his softly wrinkled hands, that this was the test mug (“See the ‘T’ marked on the bottom?” he asks). He points out the “SASSI” stamp, rolling his eyes and saying “Oh, this was when stamping your pottery was a big thing instead of hand-signing. I only did that for a short time.” After chuckling that the thing was “probably made when you were in middle school,” he points out the glaze, one he doesn’t do anymore, and the clay, which is an old mixture and therefore a different color from the other mugs. I helpfully offer that I just got an espresso machine and that if he made some more of these, I’d take a few of this size, too. He hands it to me.

“Don’t need to make another one,” Doug says, smiling with his kind eyes. “This one’s already got your name on it.” I offer to pay, but he refuses. It’s probably the coolest gift I’ve ever received, a one-of-a-kind handmade salesman’s sample direct from my favorite ceramics artist.

We talk for a while about his Italy tours. He loves the country and was so inspired by its art over the years that he started doing small group tours. I tell him about a world-famous sea glass beach in Italy I’ve always wanted to visit, and that I’ll save my pennies so someday maybe I can join him. I’d love to see the country through the eyes of an artist.

I ask him if he’ll ever retire from ceramics. “That’s the great thing about doing a job you love,” he says. “You never have to retire from it—you just do it until you can’t do it anymore.”