Coca-Cola is Just Fucking With Us Now

I mean, why not Christmas tree ornament bottles? 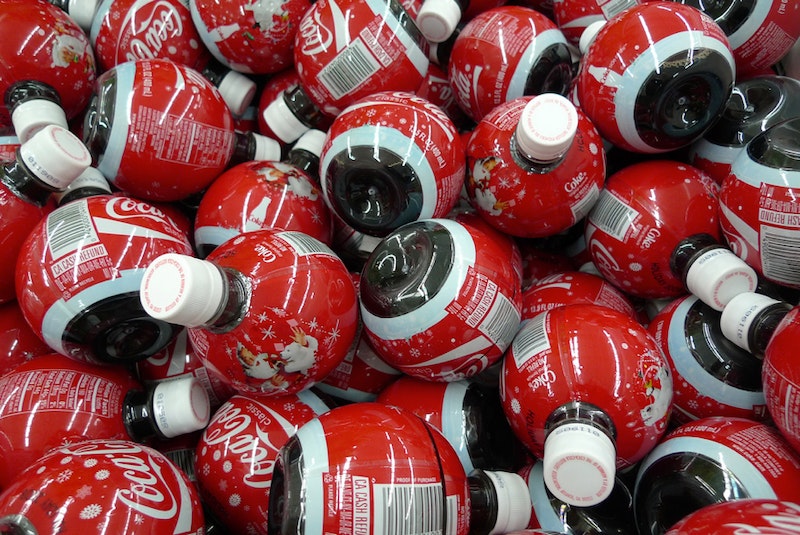 I’ve never held a grenade before, but I’d imagine that the impulses experienced by someone cradling one of those destructive devices run somewhere along these lines: 1) “This sucker is heavy,” and 2) “Inexplicably, I want to throw this at someone or something.”

The Coca-Cola brain trust may have reached a similar conclusion, as it’s produced a curious holiday receptacle this year: a 13.5 ounce globe bottle that is roughly the size of a jumbo Christmas tree bulb. I encountered a display of these while grocery shopping the other day, wrestling (futilely) with a desire to hold and perhaps purchase one. For a person blessed or cursed with large hands, this novelty fits quite snugly, like a softball, though the flat bottom and top spout erase the illusion of handling an ideal projectile; still, I did long to hurl the thing, if only at a bothersome idea or notion.

Coca-Cola does not taste any different when you sip it from a globe, nor is it any more nutritious. The decay of your teeth is accelerated in the same way. There’s no sense of festivity or transcendence to be gleaned, no epiphany: you’re simply someone who has decided to drink Coke from a bottle shaped like a Christmas tree ornament, which is both sad and faintly amusing. However, you know these bottles retail for $1 per. If one were prone to impromptu street vigilantism or culture-jamming hooliganism this Advent—and I’m by no means condoning or advocating these activities—one might do worse than to buy 20 or 30 of these projectiles. Once upon a time, vegetables were the choice for the thinking street vigilante or culture-jamming hooligan, but this world is a more connected one now, so we all well know that wasting food is immoral. Stones remain popular with vigilantes and hooligans alike, but stones can injure or kill, and murder is never, ever the right answer.

You think you know where I’m going with this, but you don’t; I’m no ogre. I’m not arguing for throwing full globules of Coca-Cola at criminals committing criminal acts or at each other as part of a Dadaist anti-Spectacle enterprise. I’m just saying, remove the caps first. Then throw. In the process, you’re not only putting a dent in minor street crime and expanding spectators’ notions of our broken society’s possibilities, but you’re potentially removing from circulation thousands of gallons of diabetes-encouraging soda.