The Most American Experience: Buying a New Car

A paradigm, a pleasure, a problem. 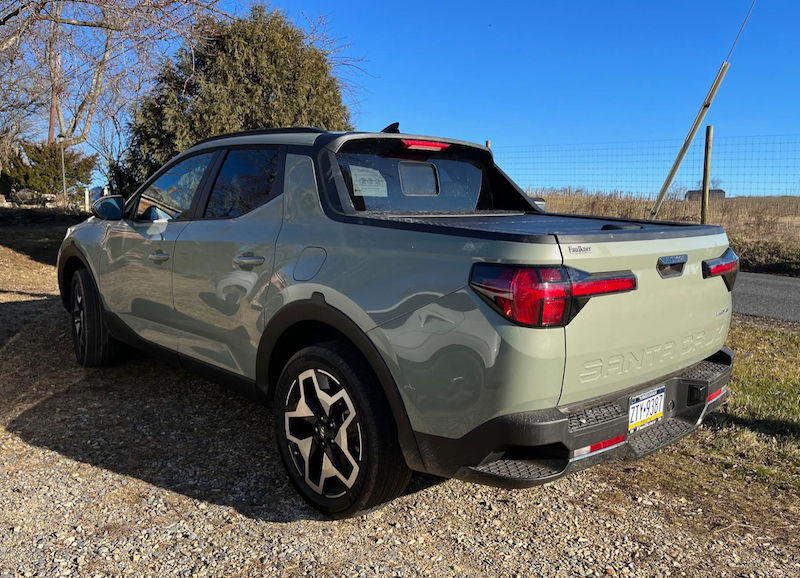 A week ago today, I walked into a car dealership in Harrisburg and bought a new Hyundai Santa Cruz: the "limited" edition, sage gray with a turbocharged 2.5. liter gas engine and HTRAC all-wheel drive. If memory serves, this is the second time I've taken this approach: buying straight off the showroom floor. Buying a new car is an extremely American experience: a paradigm, a pleasure, and a problem. At this point, too, it’s a nostalgic journey. I never expect to do it again (I'm 64 and now I've got a seven-year note), and I sort of expect that, soon, no one will be doing it ever again.

Rather, they'll be buying EVs from Carvana's "car vending machines." Or, like Kenan, they'll be talking to their appliances while waiting for the car on which they clicked for delivery. And maybe people won't be driving personal cars at all. Lots of people hope so. Still, the era of "automobility" was a distinctive and compelling thing: a culture, an economy, an identity: so fucked up and so good.

I'm not doing research on this, but perhaps the generation of my parents (the "greatest" generation) was the greatest generation for the American automobile. I think of my first wife's parents, for example, in the 1970s and 80s. He was an anesthesiologist at Mercy Hospital in Baltimore; she was a housewife. They owned Buicks, and every four years he’d drive to the dealer and trade in his pristine and quietly luxurious vehicle for a new model.

And for a few weeks after that, he'd smile a lot, talking new Buicks, taking you out to the driveway to show you. You got the feeling that the car was one important reason to do anesthesia, one way he was motivated, and motivating himself, to work all the time. It had a poetic or artistic quality: what we do after all our necessities have been met, when we can finally make choices and express ourselves.

So there was always a handsome late-model car in his driveway, as up and down their street in Pikesville, as the Joneses kept up with one another: the Lincolns and Caddies, the Oldsmobiles and Buicks. I imagine my father-in-law (who died last year) walking into the Buick dealership and being greeted as a returning prince. "Albert! What do you have in mind this time? Have you seen the new LeSabre?" He'd leave the old car there as a "trade-in" and drive the new car home. Probably, in each iteration, the monthly payment increased. That, like the object itself, was also a measure of success, yielding a sense of steady economic expansion, for the family, the neighborhood, the nation. But also perhaps a sense of gnawing, looming, growing debt, characteristic of our private lives in that period, and of our collective lives ever since.

These last couple of months I've been putting in thousands of miles driving back and forth from my house near Gettysburg to my mother's place in Virginia, and my 2011 Honda Element had racked up 215,000 miles total. It's been an excellent car, but I felt I needed a new one. Perhaps I also hoped for a mood change, a wild fun super-American throwback experience. Walking into Faulkner Hyundai on Monday morning, having made an appointment for a test drive, I subtly let it be apparent that I might want drive a new car home right now.

They sure treated me nice. The "salesman" was an extremely pleasant 30-ish woman rather than the old-time glad-handing white guy in a terrible suit. She made me very comfortable, answered all my questions and then some, didn't pressure me or say someone else was just in there making an offer on that very car. They rammed the financing through, in the time-honored fashion. I drove away in a vehicle I thought was really fun and cool and useful. And I drove away with about 50K of instantaneous debt.

This combination, the pleasure of acquisition and the burden of deficit, is a central American story and experience. It's what "middle class" really meant back in its heyday: free, hour by hour, from material want, and possessing some "luxuries," things whose excess to direct utilitarian need was embodied in and displayed by their design. The middle-class American had a home in the suburbs, and also a sort of home that he was free to steer in any direction and park wherever he pleased. It was as though one were at home anywhere, had always already arrived.

The model spent decades collapsing, starting in the 1970s. The "gas crisis" and the oil embargo jacked up prices and made people much more worried about fuel economy. The big American automakers managed to get extremely complacent as their days of dominance stretched into decades; the cars got shittier and shittier, less and less inspiring (compare a 1970s Mustang II to a classic 1960s Mustang, for example). All the design decisions were safe, and the quality control was absurdly poor. Small imports took over the domestic car market. Forty years later, GM’s still trying to figure out how to respond.

And in the same period, the car became central to a critique of American culture on a number of grounds: excessive consumption and indebtedness driven by manipulative advertising; hollowed-out urban centers abandoned by commuters (now stuck in traffic) at five p.m., as they headed in their isolated boxes to the isolated box where their nuclear family awaited, imploding; a fossil-fuel economy heating up the planet and destroying everything. Excellent other than that, though.

But one of the zones in which vehicles are still central to identity is out here in very rural America. Everyone drives a truck, and for sure all men do; if you sit on my front porch, I predict you'll see 20 guys drive by in trucks before you see one in a sedan, and that's liable to be sheriff. My Element just wasn't cutting it. Now, honestly, a Hyundai isn't going to cut it either; for my gender and region there are exactly three options: a Ford F-150 (this is the preferred option), a Chevy Silverado, and a GMC Sierra (no song that I can think of offhand).

My goal is to be good-ole-boy adjacent without actually becoming a full-on redneck. This is an example of my basic social approach, which is to flirt with and stay marginal to all groups. So I'm still looking at my vehicle as a central expression of identity. If so, then indebtedness and intermittent buyer's remorse is really who I am, which sounds about right.

But driving that sucker home, trying to figure out the software, I also had that most American of thoughts: I Love My Truck. Even with all the problems, enumerated at us so hard for so long, I still felt the aesthetic and economic pleasure. I drove home thinking people must be envying and admiring me, which might not be their usual response when presented Crispy. Who's that guy in the cool-ass truck? I have arrived.