Can anyone even tell the difference between who lives on what side? 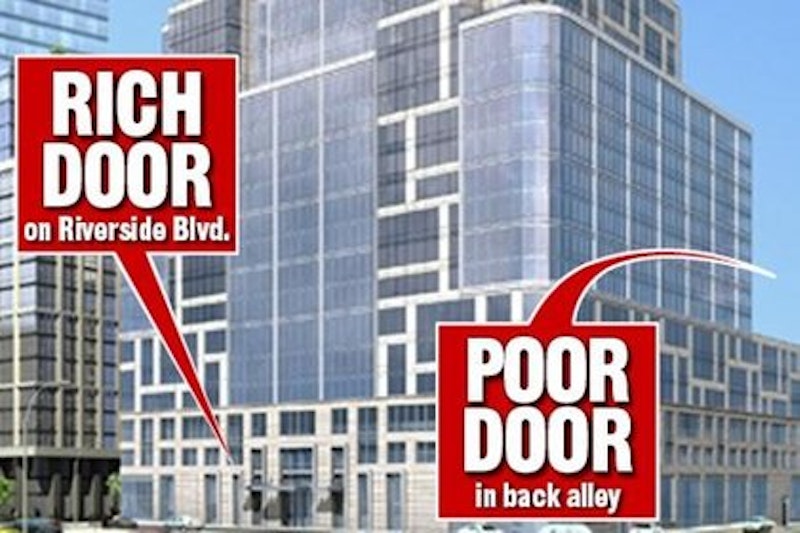 I’ll never be able to buy my own apartment in New York City. Well, at least not the parts of New York I’d want to live in, barring extreme luck. There’s just no way I’d ever be able to afford a $2 million dollar mortgage on the salary I signed up for, and the sad part is that my salary isn’t even that bad. I went to a good school, I have a couple of degrees, I’m doing okay. But by New York City real estate standards, in a city where most people can’t afford to buy and rent for their whole lives, I’m nothing.

A new luxury condo development going up on Manhattan’s Upper West Side at 40 Riverside Dr. will have separate entrances for the rich and the less rich. Moneyed condo buyers will pull up in their limousines, models in tow, and roll through the main entrance and be whisked up to their million dollar pads, where they’ll be treated to fabulous views of the river. The second entrance will be on W. 62nd St., a so-called “poor door”—yes, in 2014—where poorer rich people live in one of the building’s 33 street-facing “Affordable Housing” units.

Does this scenario sound familiar to anyone? I guess the only thing worse than being filthy rich and having the burden of countless millions to spend on private education, cars, club memberships and divorces is to be caught entering your luxury apartment building in the same place as the people paying bargain bin prices for the same address! Can anyone even tell the difference between who lives on what side? Seriously, in a building of 252 units, with countless visitors and friends and relatives and boyfriends and girlfriends and wives and mistresses and nannies and boy toys and rent boys all passing through each day, how will anyone know who paid what?

Your apartment can be better than mine, bigger than mine and have more stuff in it than mine, but do we really need a separate fucking entrance?

When Extell, the capitalist brain behind the new 33-story tower, first proposed a “poor door” (obviously as a way to benefit from certain tax and zoning breaks) it was rightfully met with strong criticism. Failed mayoral candidate Christine Quinn opposed it along with other prominent New York City politicians who insisted that every New Yorker seeking affordable housing enjoy the same apartments, views, services and entrances.

It’s easy to make this a race issue, especially given a recent Forbes study that 182 of the 185 richest families in America, whose pockets are lined with at least $1 billion, are white. But let’s not just take the race route this time, despite the fact that real estate in New York is already racially and socio-economically segregated. Let’s not talk about how Manhattan, and really all of New York City, is becoming more and more of a playground for millionaires every time someone graduates art school or Princeton or gets a job at an investment bank or moves to the city to become a star. Let’s not talk about how a crummy one-bedroom in Crown Heights will run you almost $3000 a month. Let’s not talk about the lack of affordable housing in New York that is pushing people further and further away because they are getting sick of $3000 a month rent.

This is not a debate about doors or entrances to fancy luxury condos, because I’m sure the units are lovely and that every single person chosen from the lottery to live there will deal with the “poor door” knowing that they get to call this great new building home.

In London, a place not immune to class-strife, I’ve noticed a great number of new developments going up in red-hot hip areas of East London that bill themselves as “part-rent, part-buy,” meaning that your brand new, amenity-rich apartment in a great area is treated like stock. When you buy your place you purchase “shares” in your unit and you pay rent on the rest. You can buy more shares over the course of your mortgage, and at least you’ll have something to show after 20 years. I was glad to learn about a “part-rent, part-buy” sort of affordable housing program because it makes so much fucking sense.

I think they even get to use the same entrance, too!

The bottom line is that people matter, not profits. But to profit seekers, “affordable housing,” still very often questionably affordable in the first place, results in class-based stigmatization. It means building a separate, uglier building next to a rich one. It means hastily throwing up an ugly building in an area absolutely no one wants to live in. Affordable housing means making sure that families in the rich building don’t get bothered by families who live in the below-market price building. You can’t even swim in their pools! It means the rich side gets a doorman, plus sofas, classical music in the lobby but the poor people get nothing.

So a “poor door” is a giant slap in the face to anyone who can’t afford to pay millions of dollars for a home in the city. That’s why the real issue here is how to build affordable housing in New York City in a way that pays as much attention to design, amenities, location and space as the million-dollar units. Every one knows that New York is becoming more boring every time a new Duane Reade opens its doors, and it’s all because of rich people.