GM Should Recall My Car 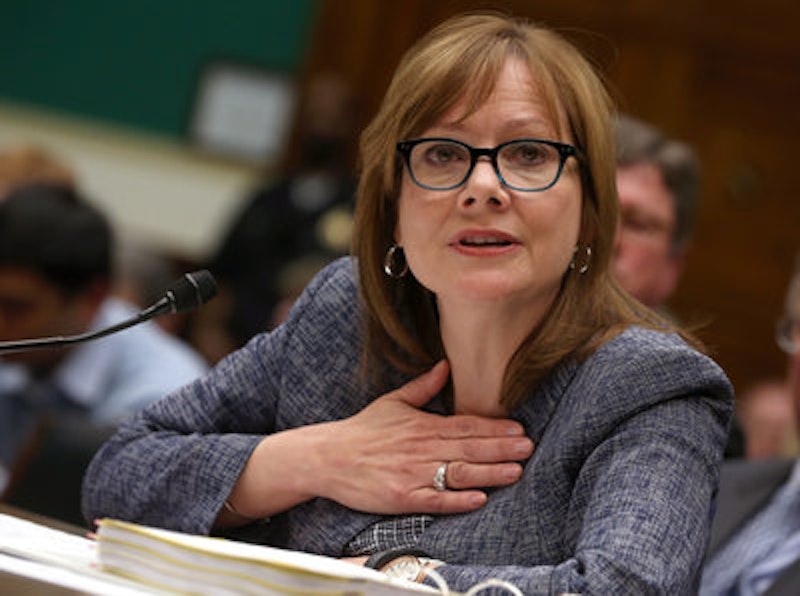 As I entered the circular driveway of the medical center to drop my teenager off before parking the car, I saw the eyes of an old woman sitting on the bench. She was terrified. My car had failed to steer when I moved the wheel to navigate the turn, and slamming on the brakes was the only thing that saved me from running her over.

I was thankful I had the reaction time I did, figured the car must need power steering fluid, and took it in for service. The 2010 Buick Enclave has been a great car—I’ve loved it from the minute I got it, never had any complaints about it until now, at around 75,000 miles. It didn’t need power steering fluid, the service place said it was fine. Then I tried to do a U-turn on the highway with three of my kids in the car and almost got in a wreck because the steering locked up. People beeped at me, thinking I wasn’t paying attention when really I almost drove the car off the highway because I couldn’t steer it. I brought the car home, afraid to drive it.

I went home and Googled Buick Enclave steering problem. I was shocked to find a class action lawsuit:

“This action arises out of a uniform and widespread defect in the integral steering system of an entire class of automobiles that poses an extremely unreasonable safety risk not only to the driver and passengers of the vehicle, but to other drivers on the road and pedestrians on the streets.

The lawsuit alleges that the steering system in these vehicles are defective because steering may intermittently and drastically fail while the car is in motion (the “Steering Defect”), thus creating a serious safety risk.”

Wait. The fuck? GM must know about the defect in my car, but it hasn’t been recalled for the issue? No way. So I continue Googling and find that GM has recalled 28 million cars this year. There are many people dead (as many as 5000?) over a failed ignition switch issue on certain cars that make up about half those recalls. GM waited over a decade before addressing the ignition problem. While people died. CNN ran a list of the millions of models affected in GM recalls. There’s a Wikipedia page.

And then I got angry. I was lucky not to be in a bad accident; it could easily have happened. That old lady could have died, I could’ve died. My children could have died.

I didn’t call a local dealership—I live tweeted @GM directly and asked them to get in touch with me. They (@GMCustomerService) did. They’ve been consummate customer service professionals throughout this ordeal. I told them right off the bat two things: I wasn’t paying for this repair (I’d read about people paying between $1-4000 to get this issue fixed—an entire replacement of the power steering, rack and pinion etc. is required), and secondly that I was writing an article about this. I see GM is monitoring social media to try to deal with what must be an avalanche of concerns. Since their bankruptcy in 2009, GM has recalled more cars than it’s sold; they were fined $35 million by the National Highway Safety Administration for a delay in the ignition switch recall.

General Motors CEO Mary Barra (pictured) declared last month that there were “no more safety issues lurking” but I guess that’s not true. She’s been quoted as pledging a “new industry standard for safety.” She tweeted (note responses below her tweet) “Good discussion w/ @HouseCommerce today; I won't rest until these problems are resolved. I believe in @GM and our employees. #GMrecall” She testified to a Senate panel just a few days ago on the safety concerns. I’m sending her a copy of this article, since she announced that issues be brought to her directly. Ms. Barra, I am directly asking you to recall these dangerous cars before someone dies as a result of this steering issue.

I actually wrote this piece last week from the waiting room of my local GM dealership where my Enclave was getting new power steering parts. I was informed that the $1300 repair would be covered by GM (but not the $400 front strut that also needs to be replaced). GM Corporate headquarters even called me, leaving a message mentioning (twice) the amount being covered and saying they hoped this “closed out my case.”

It doesn’t. Of the hundreds of comments posted online by people with my issue and repair, I’m disheartened at those that say the problem comes back even after the repairs. If I didn’t owe so much on it, I’d sell or trade it for a new one, because now every time I drive my car, I worry about the steering failing again.

I don’t get the impression that paying for my repair was “hush money” with hopes I wouldn’t write about the experience. I prefer to think GM was trying to do the right thing, squeaky (literal) wheel gets the grease, I guess. But I don’t think the other drivers of this car and similar year/models with the same problem should have to pay to fix it. The steering problem only starts happening at around 60,000 miles from what I’ve read—just outside the car’s warranty. 46 complaints to the NHTSA have been made about the steering problem on the Enclave and similar vehicles. One of the saddest parts of this story is the loss of trust consumers will undoubtedly have towards cars made here in America.

I haven’t read about any deaths related to the steering (understandably more attention has been on the cars in which the ignition simply switches off, potentially killing people) but GM needs to suck it up and add my vehicle and others to the recall list. People shouldn’t have to join class action lawsuits to get a car company to fix a problem they created. What’s another few million cars when you’re already up to 28 mil this year?