Dinner and a Horror Show

A bizarre trip to Manhattan's Jekyll and Hyde. 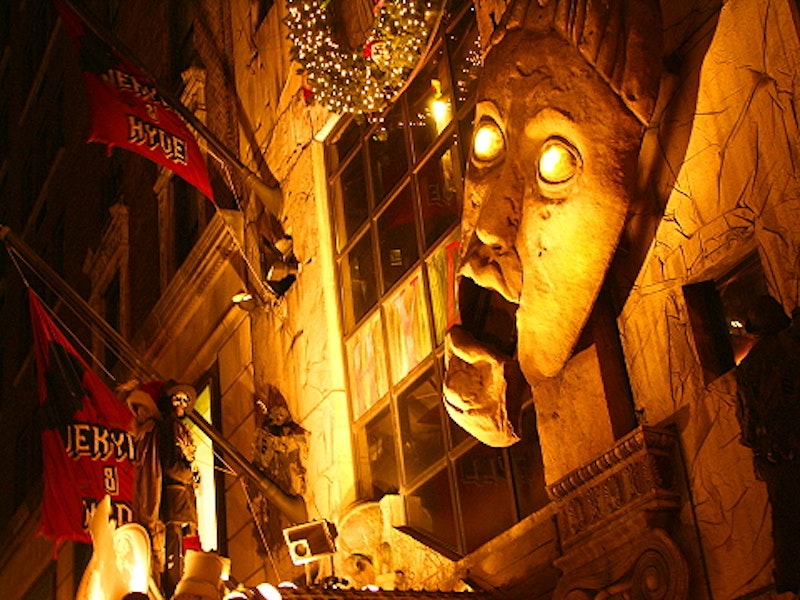 When I entered Jekyll & Hyde on W. 44th St. and 7th Ave. in Manhattan I was herded into a room with mirrors lining the walls. A voiceover blasted through speakers giving the illusion that Danny DeVito was talking to me pre-meal. The restaurant was brighter than I’d imagined, but still suited every need a horror fan could want. The room resembled a parlor of a creepy old mansion and the walls were lined with fake skulls and elephant heads. On the walls there were different “characters,” including two skulls that played piano and a large robot. Throughout my meal each of these characters would come alive and perform a song for everyone.

I sat down, ordered my beer and burger, and pulled out a magazine. As I began to read a young girl dressed like a palm reader approached me. She said I looked familiar and sat down and spoke with me. She picked up the magazine, and together we skimmed the pages, her mystic demeanor slipping as she began to grow more comfortable with me. In the end, we wound up wrangling my server into joining our table as well. I told them the story of why I was leaving NYC, how I was scared about it, and what I thought was next for me. They, in turn, shared their hopes and fears. The girl serving me had dreams of becoming a news anchor. The palm reader was an actress.

The charm of Jekyll & Hyde doesn’t lie solely with the creepy atmosphere or the $17 hamburger I probably could’ve picked up at Wendy’s. Instead, for a brief moment in one of the world’s most crowded cities, I felt a part of something. That’s a grandiose statement about a restaurant where the servers dress like it's Halloween, but it’s true. Before I’d finished my burger, a 10-minute show started on the main stage to the left of my table. There were a lot of actors screaming, and a child started to sob. I understand why the food was so expensive; judging by the amount of lights in the show the electric bill must be astronomical.

At the end of my meal, I received a check with a $3 entertainment fee. Momentarily, I thought maybe all the kind words of the servers was part of an elaborate plan to make it painless when it was time for me to pay, but figured that was too cynical. I left my server a note telling her to follow her dreams of becoming a news anchor. I picked up my cell phone from my friend Kate and walked back out into the bright summer afternoon. I’d just had dinner with two lovely people I would probably never see again but would think of often. They made sure I wasn’t afraid to leave NYC on my own, and their kindness took away my fear.