What Aren’t Your Daughters Wearing?

Let’s talk about it, already. 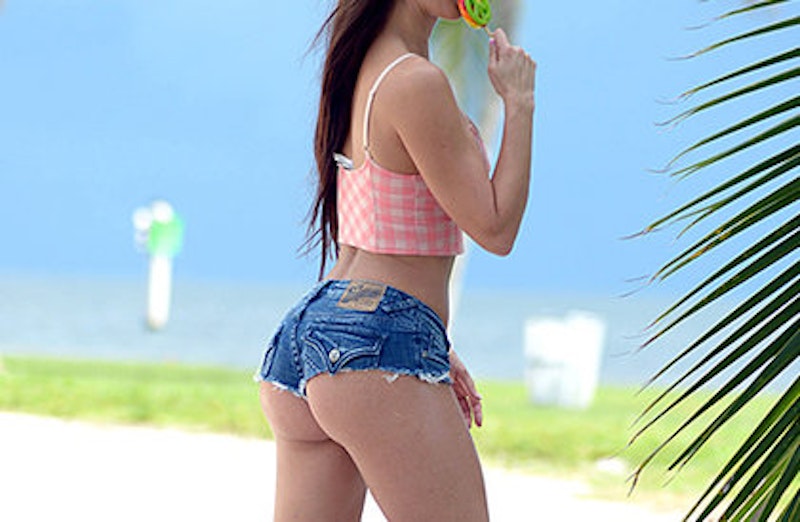 This post attempts to discuss a subject that requires several disclaimers, so bear with me. It’s entirely possible, actually, that this post may consist of disclaimers and little else.

Disclaimer #1: This past weekend was full of conversations, many of a political bent, none exceedingly acrimonious. The closest I came to anything like that was a dinner with a friend of a friend from college, where it became clear that she was significantly to the right of me on a variety of issues. But we didn’t talk about rape, a topic I don’t discuss with anyone. Why? Because to express an opinion that runs even slightly counter to conventional wisdom narratives is a conversation killer.

Disclaimer #2: At the point when I moved into my apartment last fall, the weather was beginning to turn cold. As autumn gave way to early winter, I noticed hordes of young women in short, tight dresses huddled in packs, headed in the direction of downtown, to bars or parties. This reminded me of dead weekend nights during my junior and senior years of college, when I’d kill time in the quad dorms with Florian and Melissa, sipping micro-brews. “There they go,” I’d remark. “All ho’d up,” Florian would rejoinder. We’d both smirk. There was some degree of arousal and resentment then, because those girls were lambs to frat-party slaughters. It was a ritual. But the difference between then and now, as I explained to my bemused brother-in-law, is that today the reaction is less one of lust than of parental impulse. “I mean, I thought, aren’t they cold?” I said. “Aren’t they freezing? Shouldn’t they at least wear coats?”

Disclaimer #3: Recently, there’s been a great deal of public conversation about campus rape, as though campus rape hasn’t been a thing until just recently—which is very grimly amusing to those of us who know that campus rape has been a thing pretty much forever and a day. If you went to college you probably, like me, can count at least five women who were assaulted, or almost were, and can remember the psychic carnage and he-said/she-said bullshit, the damaged reputations and the broken social circles. Better late than never, but I noticed with some dismay the tendency of rape victim advocate guests on NPR programs and elsewhere to airily hand-wave away commentators’ desire to discuss the clothing, or lack thereof, that so many young women wear.

Disclaimer #4: One of the things that bothers me so much about the recent gun control dialogue is the idea that the gun-related problems we face as a country are just connected to guns (sez the left) or just connected to mental health (sez the right). Obviously, guns and mental health contribute to the outbreak of almost daily spree killings in our great nation. Likewise—and, my God, please don’t kill me for saying this—the predatory male gaze and the factors that bolster it, the cultural of entitlement, higher education ass-covering, drugs, alcohol, and the insanely skimpy clothing worn by young women contribute to the continuing epidemic of rape. To say that the last item on that list isn’t a factor, or is irrelevant, or is “totally beside the point because we don’t want to put the focus on the victim here” is to deny reality, and to contradict some of the conditions that create predatory situations.

Disclaimer #5: Speaking of hand waving, idly dismissing the concept of impossibly short shorts, tiny tops, micro skirts, and the like as “Oh, fashion, what can you do” is bullshit. I’m no prude, but, c’mon.

Disclaimer #6: A female college classmate recently posted a missive on Facebook, excoriating a woman she saw “walking up Walnut Street on a Tuesday morning at 8:45 a.m. in the equivalent of a white bathing suit cover up paired with a black bra and underwear.” Responses to this post consisted, largely, of dudes allowing their tongues to drag on the pavement; it was difficult to gauge how many levels of irony at work there, but nonetheless, they’re part of the overall problem.

Disclaimer #7: I really want to make something clear here: I am not blaming victims. A person’s body is his or her property, and rape is never acceptable or cool, and clothing shouldn’t elicit sexual coercion or violence, and fashion designers probably don’t have any inherent social responsibility to anybody, and no assault should go unpunished. But we’re living, all of us, in the real world, with a dual, parasitic media and culture that stokes the fires of male dominance and fulfillment for profit. Should men be less predatory? Yes. Should men be more self-aware, and check themselves? Yes. Will the present media focus on rape result in more men checking themselves, and even stepping in to defuse potentially assaultive circumstances? I’m sure it will. Will there still be men who commit rapes? Yes, there will, and what I’d like to see is a world where women are better prepared for that eventuality.

This is a world where the young have to literally check themselves—protect themselves and their friends, and place their decisions within a certain context. This is a world where parents should prepare the young, without kid gloves, for the world they’re preparing to enter, and be willing to say no, more than twice. This is a world where mothers and teenage daughters should not wear matching short-shorts with ass-fat hanging out underneath to pizza parlors—which happened, recently, at an eatery where my eight-year old son and I got an eyeful that neither of us will ever be able to let go of. Stop the insanity.