Death of a Laptop

It wasn't the first computer to meet a violent end at my hands. 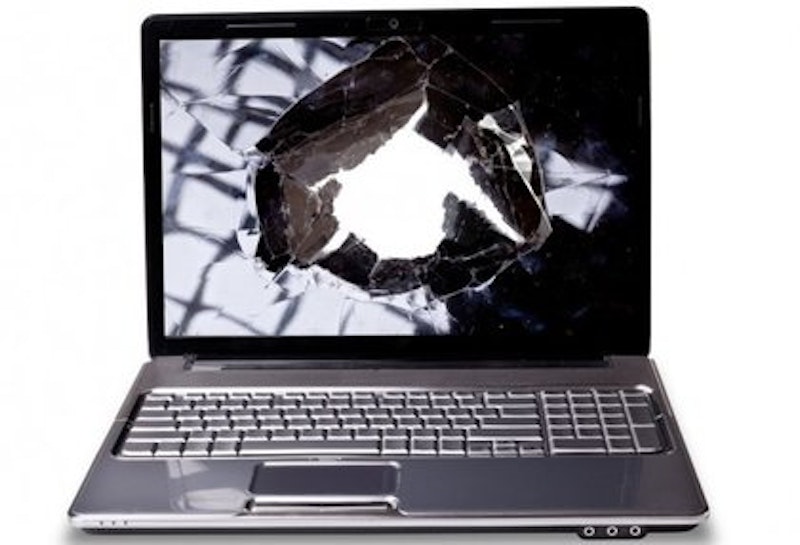 Computers crash in two ways. The first kind of crash is a technical failure, some mix of software and hardware going bad before your bulging eyes. The second comes as a result of rapid deceleration—by falling out of a moving vehicle, say, or off the kitchen counter.

Last Monday, mid-day, I was trying to edit an article for Rare when the ASUS laptop crashed in the technical sense by “blue screening.” It ceased normal functions by flashing a blue screen with an error message, wiping away much work. It must’ve been about the 10th time for the day and the 50th for the last week it had done this.

The laptop then crashed in the physical sense after I stood up from the couch, indicated to my roommate Pickel that he should follow me out-of-doors, exited the Lynden, Washington ranch house and shot-putted it onto the driveway. The sound of plastic and metal coming to a quick stop on the cement was shocking to him and malevolent music to my ears.

When went to the crash site to retrieve it, we saw that it had held together in one piece, but just barely. The front cover was abraded, the screen had shattered internally and the undercarriage was cracked and bowed. It was still running for lack of any other orders but sounded shocked and wheezing. I powered the wreck of a machine down for the last time.

It wasn't the first computer to meet a violent end at my hands. After seven years in the Fairfax, Virginia, townhouse I tossed several infuriating old models out the third story window en route to the dumpster. Those machine murders weren't nearly as satisfying, or as costly, because the devices were only minimally functioning at that point.

You might think this anti-mechanical rage originated with the computers. After all, word processing is my business and familiarity plus frequent frustration can breed darker impulses. But I'm going to claim self-defense here and claim it all started with a toaster that nearly killed me.

It happened when we lived in a big white house on the North End of Tacoma, three or four blocks from the old Weyerhaeuser mansion. We had an ancient silver mirror toaster in the kitchen that would jam up. I kept saying we should get a new one. It was always burning things and toasters weren't exactly a luxury item. Nobody listened.

One morning I woke up in my bed on the second floor choking for air. Black smoke seemed to be everywhere, so I rolled out and onto the floor to get more air. I crawled across the floor, down the stairs, and into the kitchen where the smoke was coming from to see what caused this. Kids, do not try this at home. It could kill you.

Smoke was blowing out of the toaster. Something had caught fire and scorched the cabinets above but burned out just before it could get them really going. I unplugged it, headed for the front door, and collapsed on the porch, heaving.

At that point, Dad came back with the dumb giant beagle, which sniffed and licked me. The old man had put toast down, forgotten about it, and taken the dog out for a walk. Later that day, after the house had aired out a bit, I overheard my parents talking about the toaster. “I think we can get it fixed,” one of them said.

Which was all I needed to hear. I went into the kitchen, picked up the toaster, walked up the stairs, opened the windows, and launched it over the side porch onto the driveway. “What was that?” Mom asked. “It's fixed!” came the answer.