An Ode to Zankou Chicken

It’s likely that few know the tragic history of the place. 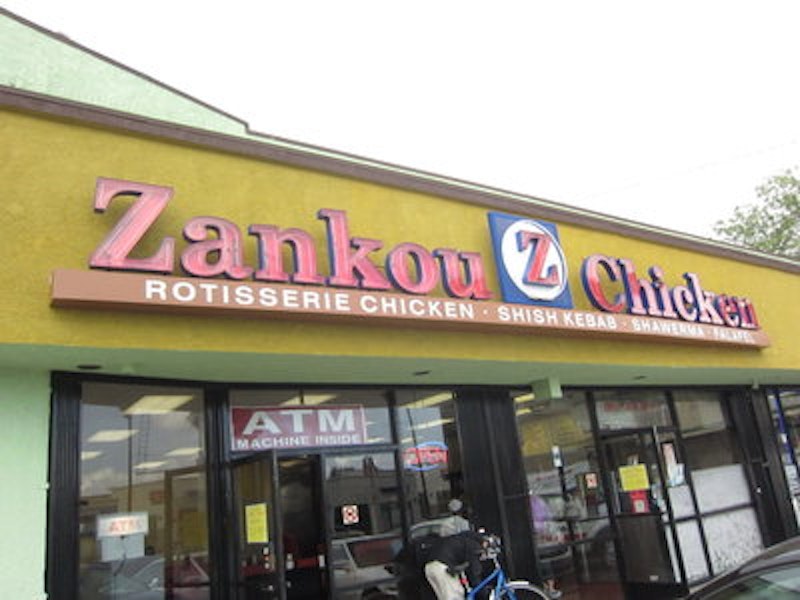 In a nondescript mini-mall in a rundown section of East Hollywood known as “Little Armenia” sits an innocuous eatery wedged between a laundromat and a liquor store. The site is the original Zankou Chicken, a humble Lebanese restaurant named after a river in Armenia.

Known for their spit-roasted rotisserie chicken and luscious garlic paste, Zankou admirers include Pulitzer-prize winning food critic Jonathan Gold, who wrote that Zankou is “good enough to tempt even an ardent Zionist to flirt with the other side.” The musician Beck lyricized Zankou in his song “Debra,” singing that their chicken was “ripe for the pickin’.” Larry David devoted an entire episode of Curb Your Enthusiasm to Zankou framing the restaurant as a Palestinian diner where Jews secretly met their mistresses.

Back in the 1980s when I lived in neighboring Los Feliz, I met my pothead friends at Zankou. We immersed ourselves in the Shawerma & Chicken Tarna, dipping into the garlic paste with every bite. The restaurant was a great place to spot B-grade celebrities like Nipsey Russell, Arte Johnson and my favorite celebrity sighting, Antonio Fargas who played “Huggy Bear” on Starsky & Hutch. I knew a vegetarian who said Zankou’s chicken was the sole exception in his avoidance of meat.

The best Zankou table was the four-top Formica near the rear window. Here we watched unsuspecting drivers bottom out their cars navigating the poorly placed mini-mall driveway. The restaurant was a melting pot of socioeconomic and ethnic backgrounds. There would always be a table of LA cops seated in a corner while gangbangers and Armenian cab drivers devoured chicken nearby.

The restaurant’s calling card was its golden tender chicken cooked with a simple salt rub and the tangy garlic sauce. (Jonathan Gold wrote that “Nothing in heaven or on earth compared with the garlic paste.”) Vartkes died in 1992 and his son Mardiros took over the restaurant. He built a loyal following and by the mid-90s, Zankou was an informal Los Angeles landmark. And then, the story becomes bizarre and tragic.

In 2002, Mardiros was diagnosed with terminal brain and colon cancer. On a Tuesday morning in January 2003, he woke early, donned a white silk suit and left his house with two handguns. He drove across town to the home of his younger sister Dzovig and mother Margrit. He entered their home, drank lemonade with them, and calmly shot them to death. He then turned the gun on himself and took his own life.

As the story spread through Los Angeles, the local Armenian community fell into shock. From Glendale to Hollywood, old Armenian ladies “sat crooked and talked straight” as they tried to fathom the shame of an Armenian son taking his mother’s life.

There had been a major schism in the Iskenderian family. The Pepsi Company had offered them $30 million for the Zankou chain. The family was indecisive. Mardiros did not want to sell. Zankou was bringing in $2 million a year and he wanted to build a large chain of restaurants. His parents were against expansion. A year before founder Vartkes’ death, the family agreed to a split. Mardiros signed over his stake in the original restaurant to his parents and two sisters. In exchange, Mardiros would own the Zankou brand and launch a chain.

Zankou restaurants began popping up in Glendale, Van Nuys, Anaheim and Pasadena. They were immediately successful. Mardiros and his family moved into a mansion in Verdugo Hills. Their neighbors were doctors and lawyers. They bought a Jaguar and Mercedes-Benz and hired servants. Mardiros became known as the “Chicken King.”

Then Mardiros learned he was sick. He broke the news to his family. His mother Margrit, in stoic Armenian fashion, told him, “Your sons. The shadow they cast is not yours.” She was referring to the struggles of his children. One of his sons was smoking marijuana, another was addicted to painkillers, and a third was charged with the attempted murder of a prostitute and pimp while the oldest had been caught in a college cheating scandal.

After the cancer diagnosis, Margrit refused to speak with Mardiros. She was angry at his desire to give the family business to his sons. Mardiros grew deathly ill. His mother and sisters refused to visit him. His cancer treatment caused fluid to build in his brain and he became paranoid, believing his mother and sister would challenge the inheritance of his sons. He told his son Steve, “God will forgive the devil before I can forgive my mother.” Then he killed his mother, his sister, and himself.

In 2000, the Zankou trademark lapsed. Mardiros’ wife Rita thought the name belonged to her. But Dzovig’s two sons challenged the claim. The matter went to trial and in 2006 the probate court ruled the trademark belonged to both sides. The family remained in conflict. All the while the Zankou chain continued to grow, and imitators began popping up all over Los Angeles. Middle-Eastern Chicken became a fad and Yelp reviews suddenly began criticizing Zankou with statements like “I don’t get the hype.”

There are now 10 Zankou restaurants around Southern California. Mardiros’ wife Rita oversees them all. The brand is more popular than ever and additional restaurants are inevitable. But the bad family blood remains. The original Zankou restaurant sill serves chicken at Hollywood Boulevard and Normandie Ave. Scientologists and local cops still come by for the golden chicken and garlic sauce. It’s likely that few know the tragic history of the place. All they know is that Zankou chicken is still “ripe for the pickin’.”

—For more details on this story click here or find more Loren Kantor at: http://woodcuttingfool.blogspot.com/