One step behind the smoker as a societal leper is the person who eats, and enjoys, red meat. 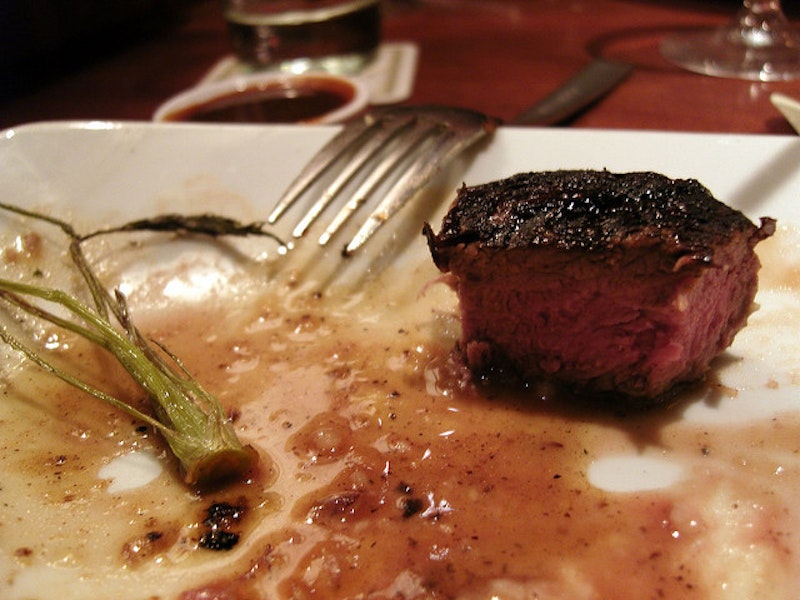 This is about steak, the fat red slabs of beef my family and I devoured on Thanksgiving Day, snubbing the traditional turkey & stuffing meal in favor of taking a table at Baltimore’s Prime Rib, a 45-year-old institution that’s a museum piece with its James Bond/Hugh Hefner décor and atmosphere.

It’s not about the TSA screenings that had half the country in a frenzy; but then again I didn’t travel and so my “junk” (this latest cliché, number one with a bullet, supplanting “game-changer” and “not so much,” is really irritating; what’s wrong with using the words “genitals” or “balls,” among others?) was protected. I do agree with Peggy Noonan, however, that this latest wrinkle at airports is not merely an inconvenience but rather a humiliation. Unlike less reasonable people I don’t blame President Obama for the hopelessly convoluted and chaotic airport security, but you’d think some official might offer some, any, sort of solution. A few years ago, I was flying to New York from Dubai’s International Airport and, as you might imagine, had to pass through four separate checkpoints. Nonetheless, none were invasive and the process was extraordinarily efficient. And don’t get me started on the lack of security at Amtrak stations in the Northeast; it’s amazing that a terrorist hasn’t blown himself up in New York’s Penn Station.

It’s not about Mark Zuckerberg, who will become Time’s “Person of the Year” in a few weeks because the editors at the mostly-forgotten magazine just don’t have the stomach to tell the truth and feature either Florida’s Marco Rubio or a collage of Tea Party protesters on their cover. The Facebook billionaire is an easy out for Time, sort of like Amazon’s Jeff Bezos in 1999, and will spare the weekly’s remaining subscribers (and staff) from having to look at yucky “ordinary” Americans—or “wackos” as affluent opinion slingers describe the millions of people who aren’t as smart as them and don’t realize that the United States is becoming a second-world nation. Specifically, I’m pointing a finger at NYU Prof. Ronald Dworkin, who wondered in The New York Review of Books, “Why do so many Americans insist on voting against their own best interests?”

It’s not about Sarah Palin’s P.T. Barnum act and how she’s unwittingly—a modicum of charity here—in league with what passes for powerful media companies. No, I’m not referring to Fox News’ shameless shilling for the money-grubbing former governor (or her appearances on the station), since commentators at Fox really believe her nonsense, but rather liberal “big thinkers,” such as The New York Times diva Frank Rich, who lavish attention on Palin because there’s no potential GOP presidential candidate they’d rather oppose Obama in less than two years. It’s a conspiracy of dunces, this push for Palin from the media, pinko or jingo, and leaves only the boring and sensible moderates—a touch to the left, and a touch to the right—to sort it out. Palin’s quest for wealth is so voracious that any rhetoric of hers against bankers rings hollow and I swear she’d melt upon holding an authentic copy of the Bible, not one of those big-print numbers.

And it’s not about the stand-off between the New York Yankees and Derek Jeter over the length, and dollar amount, of his next contract, even though it’s most pleasing that Yanks general manager Brian Cashman has to waste time on the negotiations, perhaps stalling his efforts to land lefty Cliff Lee. Jeter can’t make too much of a public rumpus since what’s on offer is a three-year deal worth $45 million, and even Yankee fans, aside from Rudy Giuliani, Billy Crystal and Paul McCartney, just can’t relate to a battle over those kind of numbers.

No, it’s about steak, that select portion of a slaughtered cow that was once a symbol—like a Cadillac or sit-down lawnmower—of the comforts and opulence afforded by achieving the American Dream. Citizens who exercise their freedom of choice by consuming tobacco products have been consigned to peg-leg pirate status for at least two decades now; steak-eaters—let alone those who devour Double Whoppers, sometimes while driving away from a Burger King—are headed to the confines of Outcast Nation, and it wouldn’t surprise me if in the near future a two-dollar sin tax is levied against people who have the audacity to ignore the obesity crisis and vegetarian moralists and indulge in a meal of bloody, red meat.

One spring day in 1983, my then-business partner Alan Hirsch and I were in Chicago, walking around the city, looking at tall buildings until a luncheon appointment with friends from the Chicago Reader, a free weekly newspaper that, 12 years after its shoe-string start, was a virtual cash machine for its owners. (And, to its credit, the Reader’s pay scale was very, very generous, unlike most similar publications at the time, including my own.) The restaurant was a dowager called The Blackhawk, and beef was the specialty—along with a storied past with big bands and whatever else you could imagine since it opened in the 1920s—like about 100 other joints in that city.

It was a pricey place, but fortunately that was of no concern to Alan and me since the tab was picked up by the Reader Young Guns—and it wasn’t small, considering it was also an era when beer, wine or cocktails were consumed at all meals but breakfast (in most cases)—but what sticks in my memory is a very brief exchange when the entrees were served. Bob Roth, the Reader’s publisher, a man of size—both intellectually and physically—was poking at his hairshirt order of broiled scrod, when Alan asked if he’d like a slice of his 16 oz. sirloin. Roth gave an inscrutable shrug, but assented as his partners rolled their eyes at the eccentricity demonstrated by a guy they’d known since college days. He took a big bite, Alan asked his opinion, and Roth said, simply: “Humph. It’s not bad. That is, if you like steak … And I do.”

That still makes me chuckle, since Roth was legendary—in the small world of weekly publishing—not only for relishing food of all sorts, but the inevitable digressions when answering a question, peppering the conversation with thoughts that were sometimes erudite, sometimes daft, but always punctuated by lengthy and maddening pauses. Yet Roth was an entrepreneur—whose editorial philosophy of printing 10,000 word articles by “no-name” writers was influenced by the Village Voice’s founding editor Dan Wolf—of no small influence in our trade and I benefitted enormously from his, and his co-owners (specifically Tom Rehwaldt and Tom Yoder), tutelage during our many business gatherings.

Which, in a circuitous manner not unfamiliar to the now-retired Roth, gets me back to the subject of steak. When the Reader Boys came to Baltimore—we jointly owned Washington’s City Paper—they’d open their wallets and we’d frequent the swanky restaurants in town, of which there were, and still are, few. One was the aforementioned Prime Rib, the midtown time capsule that still rates, in my book at least, as the best restaurant in Baltimore. The Prime Rib can hold its own with the famous steakhouses in Manhattan like Sparks or The Palm—and is just as expensive—with the added virtue of serving superb crabcakes, a delicacy that can’t be matched anywhere outside the Baltimore/Washington, D.C. metropolitan region. (I once foolishly ordered crabcakes at The Four Seasons in New York, at about $50 for a pair, and, after poking at the sodden lumps, nearly walked into the kitchen to accuse the chef of culinary malpractice.)

Anyway, my wife, two sons and I squeezed our way into the Prime Rib just after five p.m. on Thanksgiving Day, ordered four sirloins, charred-to-perfection potato skins, shrimp, oysters and artichoke hearts and marveled at just how crowded the restaurant was, mostly with patrons older than myself who, out of habit, were attired in snazzy duds. It’s very dark in this restaurant, but I didn’t see one table in the immediate vicinity that had any evidence of turkey or candied yams or pumpkin pie. Obviously, the dining room wasn’t scented with cigar smoke, although my memory played tricks and it seemed as if waiters doled out stogies, cigarettes and Tiparillos to anyone who asked, along with cocktails that didn’t have the hokey monikers so prevalent in today’s evolved popular culture. Paraphrasing the often-paraphrased Jon Landau, I have seen the future of American dining and it includes “Alien Cumshots” but no steak.