From Wal-Marts to local record shops. 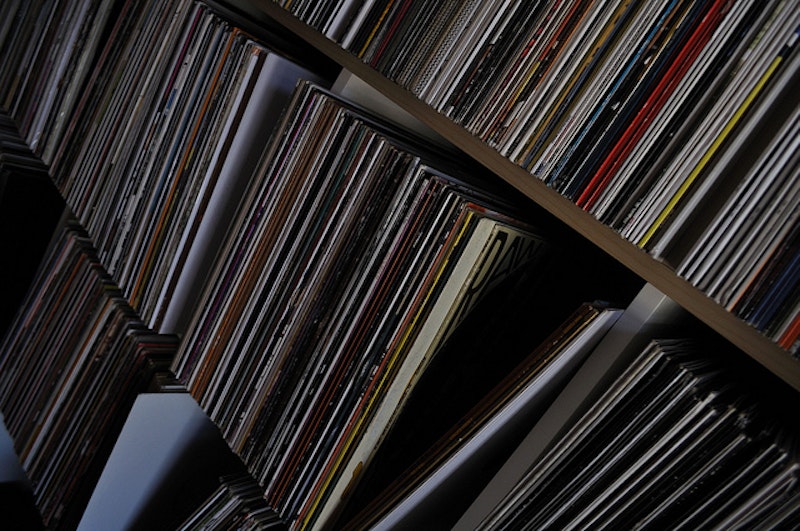 In mid-December 1999, I drove from my mother’s house in Owings Mills to the Route 40 Wal-Mart just off of 695—Google identifies it as Wal-Mart #2248—and used a gift card I’d received via a workplace Secret Santa exchange to purchase a censored cassette copy of Ol’ Dirty Bastard’s Nigga Please. Back then, Sam Walton’s cut-rate, import-friendly empire wasn’t quite as ubiquitous as it is now; you couldn’t just stumble outside of your domicile and trip over an underpaid entrance greeter‘s Keds. There are a few things I remember about the experience. First, that Wal-Mart was messy and disorganized. Second, it was insanely crowded. Finally—and most significant for my purposes here—there were employees everywhere. Surplus employees, is how I think of them. Lounging around, laughing, gossiping, not doing a thing. Probably 15-20 of them. More employees shooting the breeze than are probably on shift right now at my local Wal-Mart in Round Rock, Texas, as I type this.

Now consider this: I haven’t been to Baltimore’s Soundgarden location for a while, but every time I dropped by to paw through the esoteric experimentalist symphonies or puzzle over local rap mixtapes, I could count on there being seven-eight employees in the store, one of whom was tasked with following me at a discreet distance and asking me, every five minutes or so, whether there was anything I needed help with; ditto Record & Tape Traders’ outlets. The last couple times I visited these stores—roughly three years ago—there was less of an effort to badger me, probably because less people were working. Here in Round Rock, Piranha Records is sort of the local hip/eclectic equivalent to those stores; it’s spacious and omnivorous and sells magazines, video games, tees, and cargo pants. There is a humongous DJ Screw endcap that displays 50-some reasonably priced DJ Screw mixes. I’ve been there several times to sell old CDs; there’s never more than one person working, and that’s the manager. As a result, the place gives off a sort of abandoned, out-of-time vibe; the general lack of customers and stratospheric-when-compared-to-Best-Buy new CD prices don’t help much. The parking lot, which adjoins a barely-staffed Aaron’s and other businesses, ultimately feels less lonesome.

Meanwhile, the act of returning ill-fitting clothing to department and outlet stores alike—a chore that I sometimes have to perform in my current, unwanted role as househusband—is a worsening slog, because regardless of the time of day, there is never enough staff available to process transactions. An errand that should take five minutes takes, instead, 25; ditto the once-simple act of returning dud Christmas Lights to Target or Wal-Mart late on a Wednesday morning, or queuing up at a grocery store deli counter where one glacial clerk is always, bizarrely, working unassisted. A mall Disney store at noon on Saturday? Two staff members. Dunkin Donuts at mid-afternoon, mid-week? A drive-in order for coffee, improbably, somehow, takes 15 minutes to fill, and is ultimately offered gratis, but, what the fuck? Lately, from this writer’s perspective, retail seems to be slowly dying, or slipping into an intractable hibernation. Rarely are there reinforcements available or called in, cavalry-style; there are almost never extra lanes opened. And where the prototypical shopper’s complaint used to be “There’s never anyone around to ask for help when you need it,” now there’s no one around to even wonder whether you need help.

I keep watching the pocked linoleums for tumbleweeds, and one day soon, they’ll present themselves. No need to check for them in person; someone will probably post pictures online, which is where most people do their shopping these days, anyway.