Black Friday would be better if it were more fabulous. 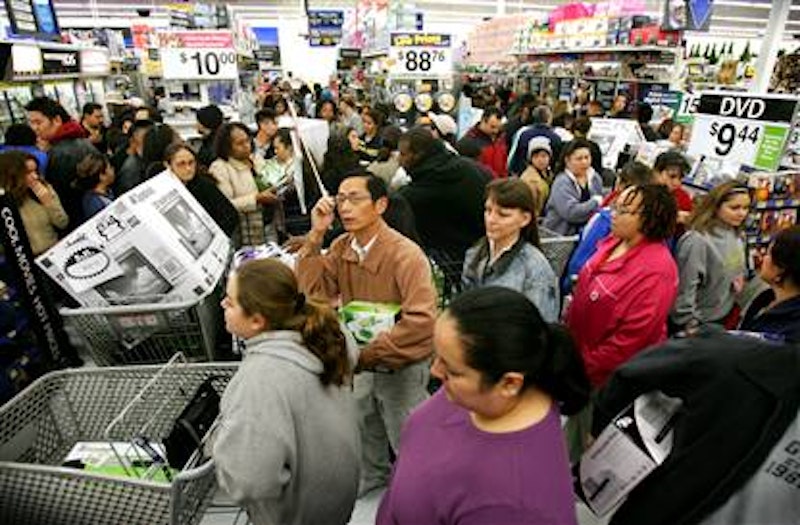 Has everybody seen that Target commercial with the old lady avec the stretched-out face who can’t hold her bladder long enough to get inside a Target? She’s basically ready to rape the store. At one point in the commercial, she’s got her face pressed against the glass (it’s not time to go in yet), her eyes orgasming out of their sockets for what’s inside. I started seeing the thing this week, and I guess it’s supposed to make me all excited about getting up at four a.m. to roll over to Target and buy a ton of shit.

Honestly, though, the last thing I feel like doing after I’ve stuffed my face on Thanksgiving is to get up at four a.m. and wait on line at Target for 20 percent off of a Snuggie. But this is America! And in America, we wake up very early for discounts.

Basically I hate Christmas shopping. I mean, in general I love to shop and everything, but I can so do without the extra long lines, the fighting over stupid products, the extended exposure to the proletariat. And I can especially do without the goddamn Christmas music, which will begin today (FML) and go non-stop until February. So get ready.

I get the need to do your Christmas shopping early. But can somebody please explain why people willingly go shopping on the first day that everybody else in their subdivision also decides to pound the aisles? In New York, everyday is crazy like Black Friday. Just go to the Whole Foods in Union Square or Columbus Circle. That’s crazy. I just don’t see myself in Indiana fighting with some huge bro over the last 95-inch flat screen television set. I’m like, dude, you can so have it.

My grandmother has always been really into Black Friday. Grandma Moore is always the first person waiting on the line, bright and early at four a.m.. She pulls up to the local Big Lots and leaves with 20 of everything, which are enough presents for the whole family. But what’s with all the rush? There are still several weeks left before Christmas/Hanukah. Plenty of time, people!

Don’t get me wrong, I do love a frenzy — but only when it’s fabulous. Such as the French high fashion house Lanvin, which dropped its first fast fashion designer collaboration with H+M last Saturday. I don’t know about the rest of America, but in New York everybody freaked out about Lanvin by H+M. People camped outside the 5th Ave. store a whole day before, and the line wrapped around the block. I know it sounds crazy, but it’s Lanvin, people.

One reason I don’t like Black Friday is because stupid shit can happen when you get around thousands of frenzied shoppers. Remember back in 2008 when a poor soul at a Long Island Wal-Mart got trampled to death by a buzzed-out stampede of people absolutely desperate to get inside? That whole story was so sad, not only because of the guy who lost his life, but because of the absolute desperation of getting inside the big box for 10 percent off.

I also can’t stand Black Friday because all the retail giants have us brainwashed, and I don’t like to be brainwashed. They need us to believe that if we don’t do all of our holiday shopping on Black Friday and Black Friday only, we will miss out on fabulous discounts and sales, two words Americans freak out over. But the real truth of it is that Black Friday is no different than December 4th or 10th. When we shop in such an explosive manner, with the force of a spring that’s pulled way back, we probably shoot their quarter earnings out the roof. It’s a concentrated day of shopping that does more to fatten their pocketbooks than give you deep discounts.

So while all of America is out going crazy over television sets, BluRays and Snuggie’s, I’ll be in my house reading a book or something. In Lanvin.