Knocked Out By the Hottest Sauce in the World

A heat aficionado hangs his head in shame after being felled by Dave's Gourmet batter. 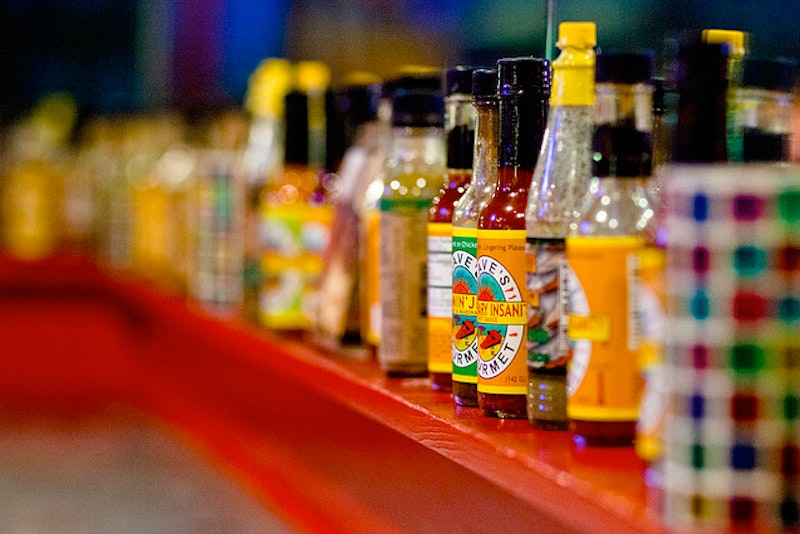 As you age, one of the irksome new realities is the inability to freely choose—whether out of health or digestive concerns—the kind of food that was once consumed without a second thought. In my case, that means no French cuisine, since the butter, cream, sugar and overall quantity of fat plays havoc with my gut. Similarly, a plateful of sushi is a delight at 7 p.m., but by the next morning I feel like I’ve drained a bottle of Bushmills. On the other hand, unlike most members of my extended family, I can handle the spiciest grub—more, sir!—with little consequence.

I’ve cleaned plates of incendiary curries in London and Mumbai; made a mockery of doubting waiters in Manhattan’s Chinatown by eating whole chili peppers; relished the blistering heat of dishes in Hong Kong and Bangkok; and downed platters of jerk chicken at makeshift lunch counters in Jamaica. As for Mexican food, whether it’s Tex-Mex ginned up by timid jalapeno-based sauces or the gourmet entrees in Guadalajara, well, that’s baby stuff.

At home, we have an assortment of bottled hot sauces, which I use unabashedly, causing the eyes of my oldest son to bug out—poor bugger, he can’t handle even a wimpy dose of Tabasco—and my wife just shakes her head at the bravado of it all. Sad to say, however, that not long ago I met my Heat Waterloo, in the form of a bottled sauce ridiculously (I thought) named “Dave’s Insanity Sauce.” I’d just settled down for dinner with a bounteous Greek salad that Melissa prepared, put an old episode of Inspector Morse (my all-time favorite British tv show, starring the incomparable John Thaw, who knocked off prematurely at the decade’s start) in the DVD player, and began to chow down. I’d liberally doused the salad with Dave’s brew, thinking nothing of it, but it was clear after my first forkful of a grape leaf and chunk of feta that I was in trouble. A few bites later and I had to remove my glasses to wipe away the tears from a sort of heat I’d never experienced; making matters far worse was the dumb mistake of dabbing my eyes with a Dave’s-soiled napkin, which felt like a hornet had stung me.

My dutiful son came home from an engagement and saw me taking deep breaths, specs still off, and dramatically asked if we should make a trip to the ER. Despite my utter discomfort, I managed to laugh and wave him off and foolishly soldiered on with the salad until finally accepting defeat. It was only later that I looked at the bottle and read these words: “Use this product one drop at a time. Keep away from eyes, pets and children. Not for people with heart/respiratory problems.” Truth be told, I’d have ignored the warning anyway, thinking it was just hype. Now I know. And, as I chucked the bottle in the trash, it was with the profound realization that, in the realm of spicy foods, I was no longer a Man of Steel. Which sucks.