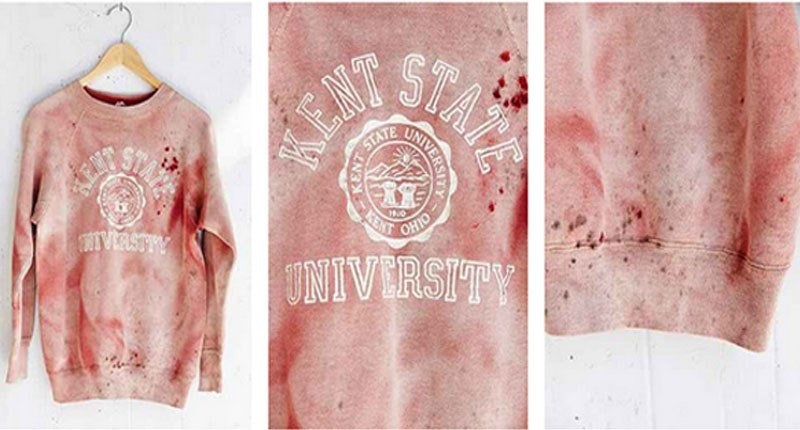 The bloody one-of-a-kind Kent State sweater is next-level troll marketing by Urban Outfitters. They’ve dabbled in it before—“Depression” tank-tops, anorexia tees, Navajo appropriation—but this one is the most absurd by a long shot. Obviously, I read just the headline and saw the picture and thought they were available for purchase ($130). But there was only one: some dude bought it and put it on eBay (adding that the sweater is “perfect for Halloween parties or whatever your deal is”). The sweater and its execution are so insane that there’s no way the marketers at Urban Outfitters are that tone deaf.

The press release followed: "Urban Outfitters sincerely apologizes for any offense our Vintage Kent State Sweatshirt may have caused. It was never our intention to allude to the tragic events that took place at Kent State in 1970 and we are extremely saddened that this item was perceived as such. The one-of-a-kind item was purchased as part of our sun-faded vintage collection. There is no blood on this shirt nor has this item been altered in any way. The red stains are discoloration from the original shade of the shirt and the holes are from natural wear and fray. Again, we deeply regret that this item was perceived negatively and we have removed it immediately from our website to avoid further upset.”

It’s a masterstroke of a non-apology, needling and sarcastic, a parody of itself. The more people talk about your brand the better: you win the cultural news cycle. There’s a lack of overtly willful maliciousness in advertising and the Kent State sweater is a bold move downward deeper into shamelessness. Shrewd, too: Kent State has become an obscure tragedy in our growing legacy of spree shootings and serial killers. Columbine trench coats, collapsible Pentagon play sets, or dolls of kindergartners with exposed skulls and guts probably wouldn’t fly. UO’s ploy was just a gentle roar on a slow news day, a bait and switch catered to our rewiring. It’ll be forgotten—except by any of the family members of those who died, I guess—by next week.

But you won’t forget that Urban Outfitters is a store, still in business, with other products for sale. Let’s not forget the demo that thinks it was totally dark and sick of them to do but still I need a new pair of jeans and a floral print button-up. I’m so pissed floral print is back when I had to dig four years ago. I’m so ahead of the times my sweater doesn’t have any blood on it. Horrified tweets like this and this are exactly what Urban Outfitters wants because they’re edgy. But, please, can we up the ante? A bloody Sandy Hook jumper? Waterboard/waterside combo? Beheading cake? I mean, good effort, but really, Kent State? Go full hog. Make a Timothy McVeigh doll. I know you can do it.