A capitalistic look into the belly of engastration. 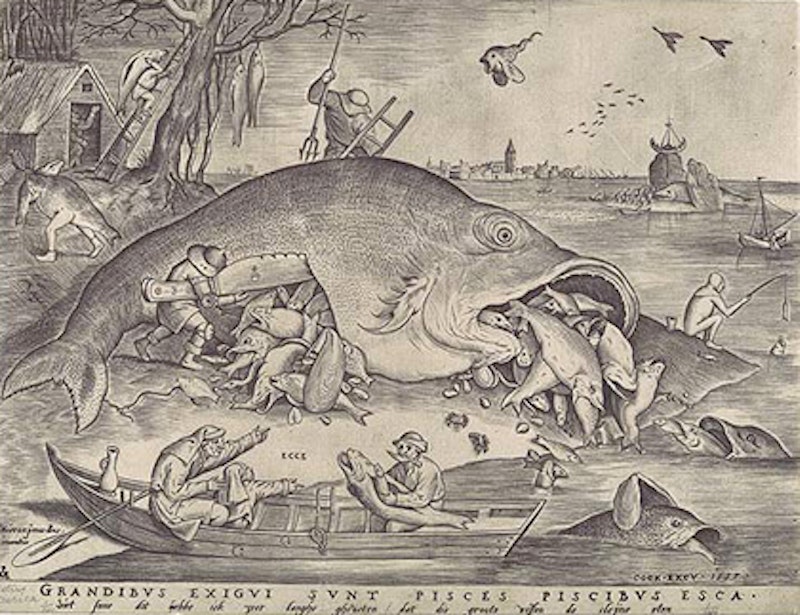 The idea may go way back to the Bedouin "whole stuffed camel," a traditional Arabian wedding dish which entails a fish stuffed into a chicken, then stuffed into a sheep or lamb, and finally stuffed inside a camel. Perhaps it's just an inadvertent metaphor for the food chain, but consider engastration's underlying narrative: the smaller animal ingested by a larger one, and so forth, in some Darwinian Matryoshka doll scheme.

Look at Pieter Bruegel the Elder's Big Fish Eat Little Fish (1557), which depicts a large beached fish cut open at the belly to expose smaller fish it had ingested, some of them regurgitating even smaller fish. A proverbial inscription, in Flemish, "Look son, I have long known that the big fish eat the small" is spoken by the father to his son in the foreground. Bruegel's theatrical images are not so much instructions on life than meditations on their fallacy. Then there is the Book of Jonah in the Old Testament, whose eponymous minor prophet is swallowed by a huge God-summoned fish for his disobedience. The moral hierarchy to scale ratio seems clear enough. Speaking of big and little fish, the Bruegel print was actually forged Hieronymus Bosch (who wasn't just more famous, but dead) by the print's publisher, probably to garner more interest and sales. The capitalistic irony: the larger fish Bosch devouring Bruegel as a ploy to sell the latter's work.

Before free-range there was free-market. One may notice how capitalistic aphorisms such as "game of cat and mouse" and "dog eat dog world" have an engastrational ring of their own. Move towards natural order and one often finds violence, but is there not some calm mental repose in envisioning a small animal stuffed inside the warm thoracic cavity of another? To bow at the ultimate and unchanging harmony of the universe?

Taco Bell has a perverse genius for constantly re-branding products for which no new ingredients are necessary. Profit margins and calories are high; bottom lines and morale are low. They’ve habitually wrapped larger edibles around smaller one for almost two decades, defaulting to their keyword "supreme." Such engastrational marketing is ecstatic. SNL facetiously nods to this in their bromantic faux-ad for "Taco Town," in which a crispy taco is wrapped inside gordita shell, then an eight-inch quesadilla, then a crepe of adequate diameter, then a 16-inch Chicago-style pizza, then an enormous blueberry pancake, and then finally deep fried and served in a tote bag.

If this farce seems insane, we’re actually not far off. Food excess sites like This Is Why You're Fat are at once grotesquely horrifying yet inspirational. Infants molded out of pure bacon and baked into a corpse; several pizzas stacked into a cake the size of a tire; a sandwich made out of everything on the McDonald's dollar menu; a burger whose buns are grilled cheese sandwiches, donuts or pretzels; a self-explanatory Nacho Lasagna; or, why not, a Bloody Mary garnished with a bacon cheeseburger slider. They're like weird fat fractals, where one food component is infinitely divided into smaller components. Tiny meals inside a massive one.

So if engastration betrays our deepest desires and fears—whether ensconced or devoured, respectively, within a host—then what may seem like mere conspicuous consumption, be it Turducken, a whole stuffed camel, or any of our current lowbrow evocations, is actually a call from our most vulnerable and violent places. As Frankenstein enthralled by our own grotesque creation, may we express our evolutionary conquest—at first in the prairies, then the marketplace—in a food chain of which we have risen to the top. No matter how big, buck wild, or formidable these creatures are, they ultimately wind up in our bellies. Which is the point, the whole animal. Stuffed. We, the big fish, are stuffed.