The Sushi Nazi of Honolulu 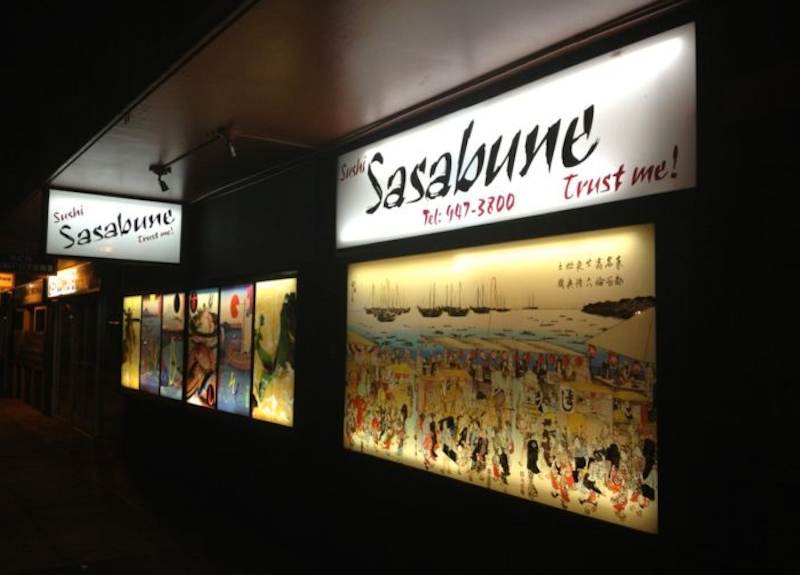 If you find yourself searching for a sushi restaurant in Honolulu, you might stumble upon a normal-looking place in a strip mall with a sign that says “Trust me” in the front window. That's generally a safe choice in Hawaii, where the local seafood is nonpareil. However, you might have second thoughts, because for the uninitiated Sasabune can be the culinary equivalent of a boot camp. Chef Seiji Kumagawa’s in charge, and you play by his rules.

Kumagawa might insist you eat a piece of sushi in a single bite, instead of nibbling at it. Gari (pickled ginger) can only be eaten as a palate cleanser between courses. You may not place it on top your your sushi, because it masks the delicate flavor of the fish. The chef will decide on how much wasabi goes on your sushi. He’ll also tell you if it's appropriate to dip the particular sushi he serves in soy sauce, and you'll eat what he decides you'll eat. This is called omakase in Japanese sushi parlance, but it's normally just one option in a sushi restaurant, rather than mandatory. Kumagawa knows what fish is the freshest, and you don't, so trust him.

Only once you—the paying customer, and it's not cheap—submit to this control freak behind the counter can you enjoy your dining experience, because Kumagawa’s not fooling around. If you soak your sushi rice in soy sauce because you want maximum flavor, or you like to load up on the wasabi, Kumagawa-san may ask you to leave. That's his reputation.

But you have a master of his craft—someone who had to do other kitchen jobs for five years before he was even allowed to make the sushi rice—who’s giving you lessons in how to best enjoy his labor. Most chefs just let you reinforce all your bad sushi habits. As sushi is the subtlest of foods, prepared meticulously, an educated approach to eating it will maximize the dining experience you're paying substantial sums for. Also, to eat like a frat boy at his place is to risk insulting the sushi chef (itamae).

If you were in Los Angeles before 2012, when chef Kazunori Nozawa closed down Sushi Nozawa, you had the chance for some culinary tough love too. One high-profile restaurant critic was taken aback when her waiter told her “You no choose.” Nozawa, who also had a “Trust me” sign in his place, was another hardass sushi chef who'd earned the Sushi Nazi sobriquet. His rules were Kumagawa’s rules, and then some. He’d brook no cell phones, no text messaging, no loud talking, no switching seats with other patrons, and no telling the master what you want to eat. Charlize Theron found that not even her beauty and celebrity power was enough to get her an exception. When she tried, he booted her out. Asked about the incident, the cranky chef responded, "She choice too much.” Ordering such westernized abominations as California rolls or Sushi Dynamite was another way to risk ejection from Nozawa, and using an imaginary allergy to get a substitution was a useless ploy.

Other cities have had their Sushi Nazis too. They're polarizing figures. Your first reaction may be to think of them as arrogant prima donnas who are for masochists only—“The customer's always right,” and all that jazz. That old slogan applies if you're a salesperson, but sushi chefs are salesmen only in the nominal sense, and a select few choose not to take on that role at all. Most Japanese sushi chefs who come to the U.S. have to endure the daily routine of watching their clueless customers blithely mess up the food they've dedicated their lives to preparing. They put a special sauce on a particular piece of sushi and then the customer insists on having soy sauce on it too. They end up cynical and enured to their fate, sneering at their customers behind their backs.

The Sushi Nazi eliminates this depressing result. He doesn’t curl his lip after you’ve paid the bill. For him to do his job properly, you must cooperate. If you refuse to do so, he feels obliged to terminate the business transaction. It’s a more honorable approach. Nietzsche wrote of the “last man” (der letzte Mensch), someone who’s given up on pursuing a vigorous life, instead settling for comfort and security. The German philosopher’s ideal, however, was the Übermensch (overman) who eschews such mundane pleasures to pursue higher callings. Sushi Nazis are the Übermenschen of the culinary world. They refuse to pander, for they have a higher mission. In order to attain true culinary enlightenment, you must surrender your ego.