The Visceral Miracle of Cooking Bacon

As close up and personal as cooking gets. 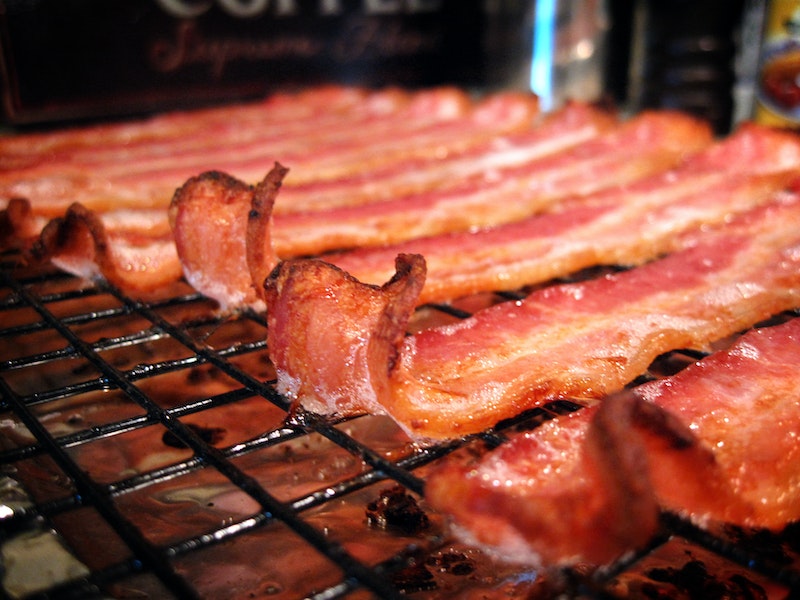 I love bacon. You love bacon. All of America loves bacon. It's an addiction without bounds. We want bacon on chicken breasts, on burgers, sprinkled in salads, mixed into milkshakes, disintegrated into lines we can snort off a stripper's bare ass. We can't get enough goddamn bacon yesterday, today, tomorrow. Everyone's pretty much doomed to a torturous old age of heart disease, and we will like it.

But consuming bacon isn't half as intimate and intense an experience as cooking bacon. And I don't mean laying it out between paper towels in a microwave and walking away: I mean draping strips of this slimy, porous meat on a skillet, firing up the heat or gas, and actually tending to it up close and personal, no facemask or EVOO or baking mittens.

Frying bacon is a distinctly visceral experience; it's almost sexual. There's the provocative quiver of bacon in the pan, the sizzle of the pan as bacon fat is extracted, the snap, pop, and sweet burn of flying grease, the aroma of burning bacon filling the kitchen. When you're preparing bacon, it's impossible to focus on anything else: other people, the radio, whatever's on your smart phone. You've got the overhead vents going so the smoke alarms don't start blaring, you don't want too much grease to splash on you, and you don't want the bacon to overcook—often when it seems like bacon is overcooked, it's done, and that doesn't become clear until you've transferred it to some kind of paper product.

Pigs suffer the misfortune of being similar to homosapiens in enough regards that they're used for experimental testing, dissections, and other such indignities. Most of us are aware of this, and that knowledge shifts the experience of preparing and shoveling down tons bacon from the realm of the carnally licentious into the netherworld of the cannibalistic. What's telling—and weird—is that thinking about bacon this way while frying and eating does absolutely nothing to waylay my desire for still more bacon, Lazy Susans of bacon, carafes of bacon, a fucking bathtub of bacon. Wow.