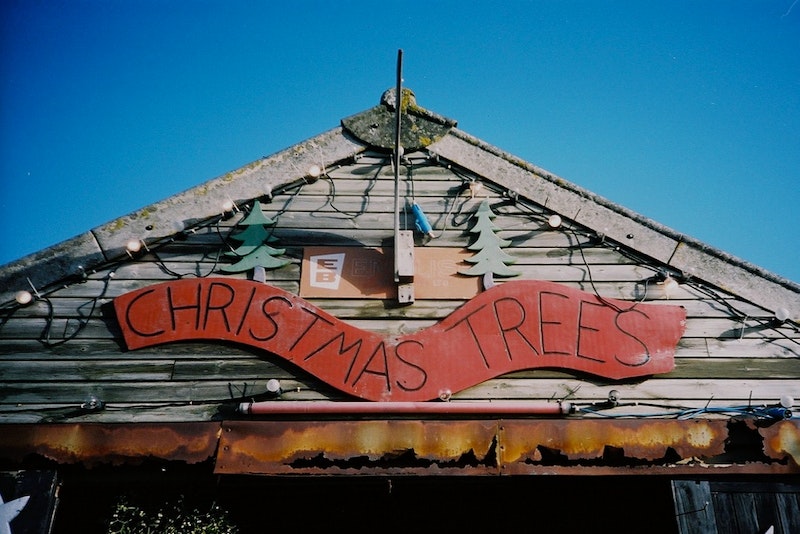 Mid-December was when we'd go get the tree, usually the second week of that month, when it was so cold that whatever gloves I brought along weren't enough. Out Reisterstown Rd., away from Baltimore, so far out that it was as if the city and even Baltimore County didn't exist, to a tree farm that's still there but I couldn't give you a name. Mom and I wandered up and down rows of trees that were indistinguishable until we found something that seemed acceptable, and then took turns using the old hacksaw to fell it. Mom insisted on a "blessing on the tree," as a way of apology, and then we trimmed it near the stump and lugged its corpse to a tree-bailing machine, overpaid, drove it back. My fingers were usually numb by that point.

At home we set it up in the stand, fed it some water. Over-decoration was the norm, like the Griswolds' or the monstrosity from A Christmas Story. Ornaments mom had bought, ones I'd made at school, tons of colorful lights. Once or twice we drowned it in tinsel but the cats got into the habit of batting it down and eating it. The tree always stood in the same spot, between the bureau drawer or whatever it's called on one side, and the love seat and wall mirror on the other. The thrill of those Christmases, for me, lay in loading up the tree while Calypso Christmas music played on the turntable. There was also non-alcoholic egg nog. Presents would accrue underneath. I bought the silliest, chintziest crap, from mall stores and Ross Dress For Less, because I was subsisting on an allowance that I wanted, mostly, to use to feed my addiction to comic books.

There were other decorations, but the tree was the centerpiece, and when I'm trying to trace my affection for Christmas to the source it's what I arrive at, what I embrace. Some years there was a Yule log on the dining room table in a nod to my mother's true faith, which I grasped and respected at an early age without ever fully embracing; she felt it was important, she told me not long ago, for me to have authentic Christmas experiences. There was something warm and comforting in that scene, bigger and more pure and insulated from the crass holiday commercialism that was already swelling to a fever pitch, though I wasn't quite old enough yet to hear it.