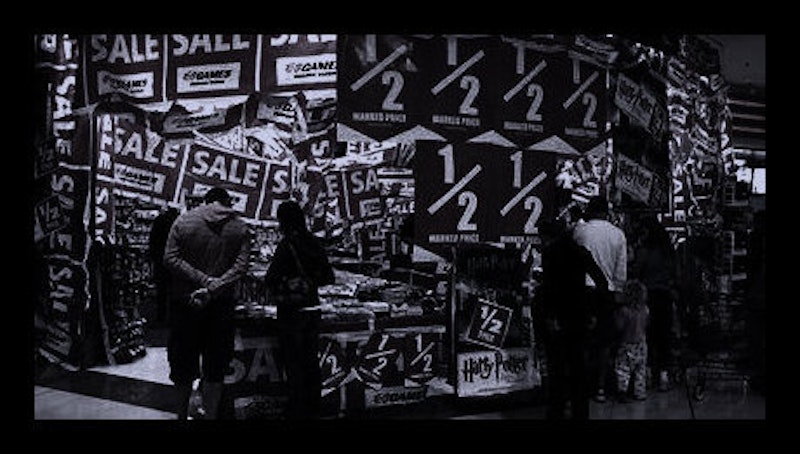 I don’t give a shit what’s on sale today, you couldn’t pay me enough money to enter a retail establishment on Black Friday. I worked at the King of Prussia Mall during high school and college and experienced enough Black Friday devastation to last a lifetime. Not that I would go, but in a mall on a day like today, I’d simply walk around feeling sorry for the retail workers and how much of a mess there was going to be to clean up for the next two days.

I don’t watch TV on Black Friday. Who wants to see all the people trampling each other? There is a death count on this day, the day after we all sit around and act thankful. How uniquely American and totally disgusting is that?

It gets more disgusting every year. Black Friday, back in the old days when my parents camped outside the Toys R Us with blankets and folding strappy lawn chairs at five a.m. for two Cabbage Patch dolls for my sisters seemed comparatively charming. Nowadays, everything’s gone by five a.m. because stores started opening at three, then midnight Thanksgiving night, and now, God help us, companies opened on Thanksgiving Day. Nothing should be open on Thanksgiving Day. It’s the one of the few purely American, non-religious holidays we have. Did we have to mess it up by shopping?

Congratulations to the stores that were brave enough to continue their traditions of remaining closed on Thanksgiving so that their employees could enjoy the holiday. Costco, Barnes & Noble, Nordstrom, BJs Wholesale, Radio Shack, Burlington Coat Factory, REI, Sam’s Club, Patagonia, Sur La Table, P.C. Richard & Son, Marshall’s, T.J. Maxx, American Girl, Home Depot, Dillard’s, Ross and other stores were closed yesterday. I loved reading that Nordstrom doesn’t have holiday decorations up until today. Super classy. We’ve been sick of seeing them in every other store since the week before Halloween.

In the 1980s, while wrestling through early morning lines at the mall to get to work, I could understand the Black Friday thing a little more. There was no Internet, so if a store had something on sale for just that day and you wanted it, you had to try to get it before it was sold out. But the Internet pretty much ensures nothing’s really sold out, it just costs more on eBay if you get it late.

I don’t understand people who don’t shop online. Perhaps due to burnout from working all those Black Fridays at the mall, I have ordered everything from Amazon since it first opened up “shop” in 1995. When I go into a store or mall nowadays, a very, very rare occurrence, the sensory overload is completely overwhelming. The sounds, the people, the smells, the people walking into to your personal space with makeup samples—it’s exhausting just thinking about going. So I don’t.