Terrors of the Puppy Mill 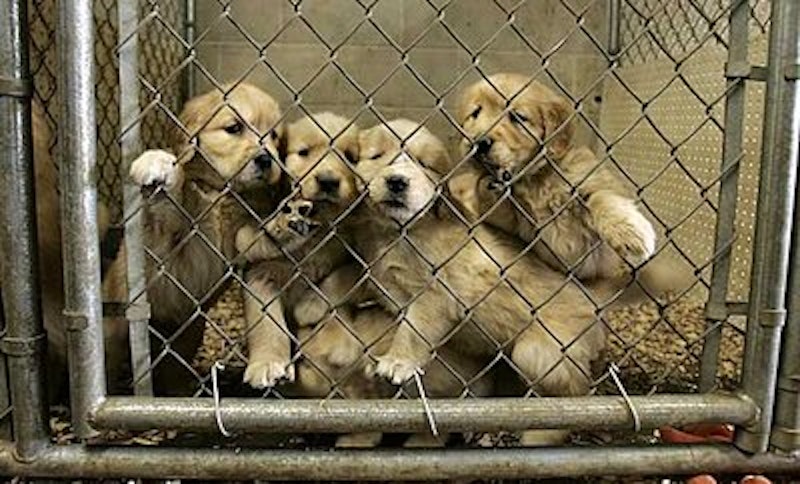 I was in town and decided to swing by and visit my friend Martha. I texted her and she messaged back, “Great! You can meet our new addition to the family.” Along with the text was a picture of a very small puppy’s head. I was pea green. Since my dog died last year, I’ve been torn between loving my freedom and getting another one. I made my way through the house and asked, “Okay, where’s the baby?” She directed me to the kitchen in which sat a pitiful looking skinny brown puppy named Brody.

I know puppies. I know when they are just plain spent but fight to stay awake with droopy eyes lest they miss out on something. This one had me suspicious. I took it on the porch and held it for an hour or so, and then tried to let him do his “business.” It was abnormal what came out of that tiny body.

During my visit, Martha told me the story of how her daughter wanted another dog for a long time. They own two already and Martha was not quite ready to add another to the menagerie. But Martha’s daughter spotted an ad for chocolate labs in The Washington Post. On a teenage whim, she and a friend drove from the Eastern Shore of Maryland to Howard County to a random breeder and bought a puppy for $150 with money she had saved.

Late in the afternoon, she returned home with the goods. Martha knew immediately there was a problem when the eight-week-old puppy continually expelled blood and was very weak. She took it to her vet, who kept it for hours hydrating, disinfecting, medicating and finally declaring it “very sick.” He also informed my friend that all signs indicated the dog had come from a puppy mill. Martha spent well over $400 bringing the small creature back to life.

Martha called the breeder and was told the puppy wasn’t sick when it left the premises. I wonder how an animal can fall seriously ill within a two-hour period? And did the breeder think the dog picked up millions of fleas on a car ride? Martha got nowhere with that conversation. The day after my visit, we both separately called the Humane Society and were told that, yes, the woman did in fact run a puppy mill but she also met the bare minimum of what is required: food, shelter, a county license and rabies shots. They also informed us that they have had numerous complaints over the years but can’t seem to “catch her in the act.” I found it incredulous considering the breeder apparently had over 150 animals on her property. According to the shelter, the woman brokers with other puppy mills in North Carolina so the history and care of these dogs is virtually non-existent.

Puppy mills are large-scale commercial breeding facilities that often neglect the basic health and welfare of the dogs in their care. While the puppies are normally sold at eight weeks of age, the parent dogs at puppy mills often spend their entire lives in small wire cages with little to no veterinary care, personal attention or exercise. The mills sell puppies through pet stores, classifieds and over the Internet. The majority of dogs currently sold in pet stores come from puppy mills.

The Humane Society of the U.S. estimates there are at least 10,000 puppy mills in this country alone, thousands of which supply puppies to pet stores. Martha’s daughter acted irresponsibly by purchasing the puppy without her parents’ permission but this adult breeder also bamboozled a 16-year-old minor. The silver lining is that this little guy lucked out and found a wonderful home, yet just the act of purchasing continues to promote this horrendous cycle of an operation that places profit over the well-being of innocent animals who are often severely neglected. Investigate a breeder if you decide to buy a dog or even better, go to the nearest Humane Society.