The Vanilla Ice Cream Challenge, Part 3: Ben and Jerry's Vanilla. Rating: 8 out of 10. 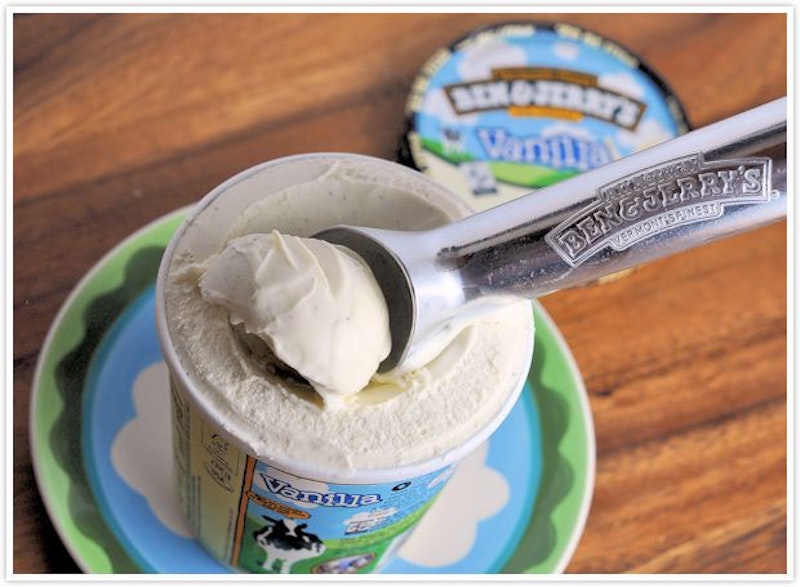 There was a time, many years ago, when a pint of Ben and Jerry's Vanilla made for the perfect conclusion to an evening kicking it with old friends. That was in the twilight of my sometimes altered-state period, after college but prior to cohabitation, where we'd all coalesce at somebody's pad for the kind of congenial, low-impact partying that never draws the attention of local law enforcement but hovers sweetly in memory. By about 10 o'clock it was time for a taste of the most delicious vanilla ice cream the nearby convenience store had to offer, and that typically turned into the entire pint while I was zoned out. I'd look up, find myself holding an empty container, the cast of characters having shifted slightly as the half hours flipped, by without proof.

What is the most important quality that a good vanilla ice cream must possess? Subtlety, a sort of mystery and mysticism. When you place a spoonful of vanilla ice cream into your mouth, you obviously know that it's vanilla, but the experience of its vanilla-ness should not be immediate or overt. There should be the creamy ease of it coupled with a carefully churned solidity; these are the elements that should speak to the palette immediately, before the flavor actually arrives. That flavor should just creep up on you, like a premonition or a ninja, and then sort of humbly announce itself as an avatar of confectionary holiness.

Needless to say, Ben and Jerry's Vanilla circles that particular cherry exquisitely, better than any other vanilla ice cream on the market save maybe Haagen Dazs—even when one's consciousness is resolutely unclouded. The downfall of this vanilla, in my more adult experience, lies in the difficulty of locating it anywhere. Frustratingly, groceries tend to stock the flashier, groovier Ben and Jerry's flavors; I've been fortunate that the Weis down the highway, for reasons I'll never understand, consistently lines its shelves with God's true gift to vanilla ice cream obsessives. If this kind of boring is wrong, then I never wanna be right.