Kombucha Is My Magic Potion 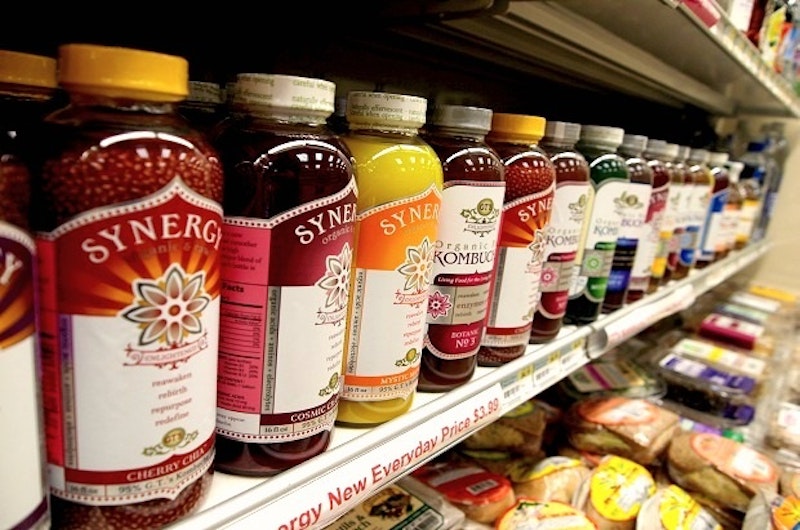 It’s a good sign that Kombucha (fermented tea with a bacterial, waste-like smell that makes most people recoil in disgust) is becoming more common in convenience stores. Nothing on the wall of refrigerators at 7/11 except water is healthy or satisfying past the initial pseudo-orgasmic moment of delirious soda, candy or taquito ingestion. Junk food and drink needs to exist so people don’t burn the highways down, but it’s in the interest of Monsanto and Coca-Cola and General Mills to keep their parasites alive longer. The corporate food pyramid monolith will control what most people eat for at least the next hundred years. Healthy junk food has to be on the way right? There is no reason Kombucha has to be a niche obsession for hippies or a remorseful choice at the checkout line.

I’ll aggressively shill for the Synergy Kombucha with chia seeds until we get a crate at the office. I’m only concerned with three flavors: raspberry, cherry, and grape. I’ve thought about this for a few weeks. I’m pretty confident this is the best “drink” I’ve ever had, considering taste, nutrition, hunger-quelling, aftertaste, digestion, and “after effects.” I’ll disclose that I’m aberrant: it seems like most people are wired to perceive everything about Kombucha as sewage-like and disgusting. So for now the stuff remains overpriced and far from ubiquitous, and when it runs out at Safeway, or the health food store, there’s no clamor, no dejection, no withdrawals, except from me. Everything else I put in my body makes me feel gross, ungainly or sick in some way—acid reflux, questionable digestion, intestinal distress, mind fog, mind clot, mind rot. Corn syrup and rubber hamburgers keep the population stupid and sickly. Synergy Kombucha. This is my magic potion.

I don’t think health food is anathema to the corporate organism that functions solely to grow and profit, acting without any ethics or agenda, aside from its own interests. If there are people above the President, they probably want to keep as many of us as weak and vitamin-deficient so that the only Alex Jones fans will be ready to survive past the first week when everything falls apart. Still not convinced? Kombucha is simply a more palatable version of Soylent. Chug one and that’s your breakfast. Healthy and tasty options remain rare and overpriced, while we all put up with the poison that’s inescapable, and I say that as someone who grew up on McDonald’s and Coca-Cola, which are both psychoactive drugs: the intoxicating, hypnosis-like smell that lingers two or three blocks around the perimeter of the restaurant, the delirious moment of first consumption, the slow wave of guilt and regret and physical discomfort that rises once you finish a Big Mac, the depression, pain, and possible vomit that follows, until the cycle would begin again, every day. I don’t care about selling out and I’m not going to stop the decline of late era capitalism—I just wish the dozen few at the top would throw us a bone to make life a little less miserable.