A massive gut or hack cough. You decide. 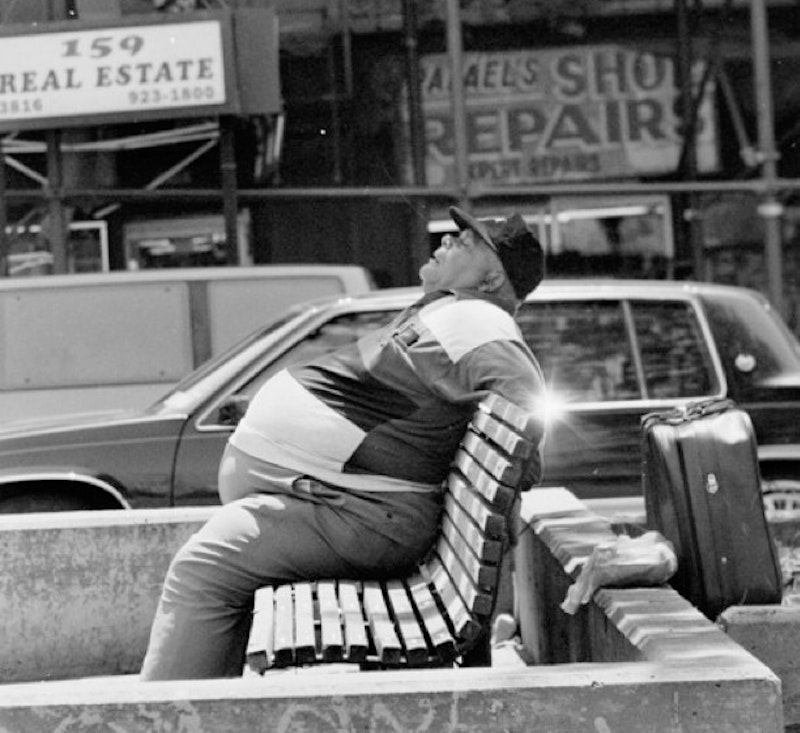 Not a week goes by without a slew of medical studies or articles—often contradictory—about the obesity “epidemic” in the United States, and unless it’s the insufferably sanctimonious Mayor Michael Bloomberg popping off on the subject, I usually ignore them. Over the weekend, though, I received the Aug. 5 New Republic [paywall] and after reading a fine piece by Reid Cherlin about abolishing the White House daily press briefing, I was drawn in by the headline “How We Fail Fat People.” Too enticing to pass up, even if it was written by the humorless Judith Shulevitz, TNR’s science editor.

The sum-up of Shulevitz’s article: “[W]e’re learning ever more reasons not to regard the corpulent as pathetic losers.” Speak for yourself, Judy! Sure, I’ve made a few fat jokes in my 58 years, but never with real malice since I don’t particularly care what people look like and figure it’s their own business if they want to diet, get a tummy-tuck or blame genetics for their girth. I’d wager that most Americans have been the butt of a cruel barb at some point: when I was 15, for example, and having my school picture taken, the photographer, noticing my prominent acne, said to his buddy, “Another face that only a mother could love.” I was taken aback, momentarily, and then rationalized he was an asshole with a really crummy job, and trundled off to biology class.

I’ll be pilloried by the Health Police for this (not entirely serious) suggestion, but maybe the “weight-challenged” ought to start, or resume, smoking. After all, models live on Marlboros, vodka and celery sticks! A chart in Shulevitz’s article shows that the percentage of “overweight, obese, or morbidly obese Americans” in 1962—pre-Surgeon General’s tobacco apocalyptic warnings—was 46 percent; by 2010, that number had grown to 75 percent. It’s no coincidence that the seats at Boston’s Fenway Park, built in 1912 (with scattered renovations over the years) are tiny: I’m of normal weight—and a moderate smoker—and feel pinched when attending games there. Look at old photos from the early-mid 20th century and what’s striking, aside from the hats, dresses and suits, is how generally thin people appeared. Not saying there’s a precise correlation, but as most know, cigarettes were ubiquitous back then, whether in houses, supermarkets, restaurants, bars, sporting venues, bowling alleys or on trains and airplanes.

Today, smokers are treated like pariahs nearly everywhere in the U.S. Have a smoke outside a movie theater after a film and the number of hairy eyeballs pointed your way is astounding. I wonder if the “morbidly obese” will, in a matter of years, be cordoned off to areas where the general populace doesn’t have to look at them. And, you have to think that all the super-sized burgers, Big Gulps and all-you-can-eat buffets at chain restaurants are so popular because they keep the hands busy. Naturally, even though the government—and Bloomberg and Rep. Henry Waxman are just the biggest cheerleaders—implicitly applauds the ostracism of smokers, even though tobacco will never be banned because of the enormous tax revenue it adds to the coffers. (One more reason marijuana should be legalized and sold at convenience stores, but I don’t want to get off track, here.) Whippet-thin Barack Obama, a closet smoker, might have a word or two about the subject.

Shulevitz has a personal interest in this story (although she doesn’t say whether or not she’s “plus-sized), and lays it out in the first paragraph: “I grew up around serial dieters filled with rage, at themselves and their predicament. I can hardly remember a meal at which someone didn’t blow up about something, leaving the rest of us to tackle our brisket in silence.” I’m in no position to argue about her experiences, as I’m not acquainted with the woman. On the other hand, families are often combustible at holiday gatherings, or just every-day dinner tables, and the nastiness could be about anything, whether it’s a bad report card, lack of disposable income or the reasons why the Orioles lost their last game.

At my own house in Suffolk County, growing up, I remember a rare outburst that wasn’t at all pleasant. My mother, out of character, made an arbitrary declaration one evening that my four brothers and I must finish our portion of canned lima beans, and was met with resistance, especially from my brother Doug, who was unreasonably ticked off at the dictum. The rest of us cut the foul beans into quarters and swallowed them with milk, but Doug was in a conniption of civil disobedience, and his bad temper resulted in waterworks from Mom. That was alarming—she was pretty stoic—and my Dad took control of the situation. The atmosphere that enveloped our small tract house was toxic for the next week.

I might get arrested if I actually advocated increased tobacco use, but you get the point. Everyone gets a final curtain call, and unless you’re a priest—hmm, better skip that one—most of us pick a poisonous vice. It’s just a thought, but walk on a crowded street and notice if you see more 60-year-old “morbidly obese” people or smokers. I think it’s the latter.