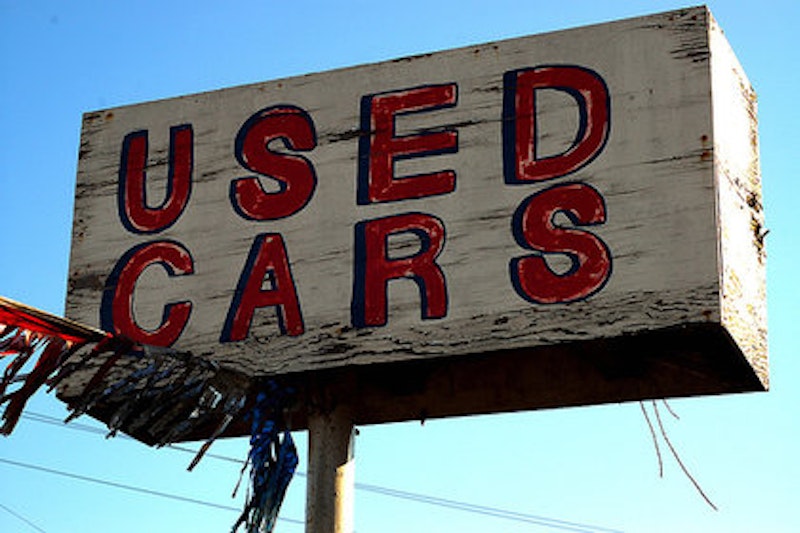 Not so long ago, when a Ho-Ho Howie wanted to put an undesirable in his place, the object of scorn was often a described as possessing the sleazy characteristics of a used-car salesman. I’ve no idea how close to the bottom, when Americans are polled, that profession now rates, but surely today it’s not in the same category as politicians, the media, certain athletic coaches, lawyers and, increasingly, the clergy. There are the ubiquitous car lot television advertisements, but they don’t register; really, there’s no comparison in the nausea-inducing sweepstakes between a guy or gal pitching a Labor Day sale for a Toyota and a prescription drug spot that spends 60 percent of its minute with sotto voce disclaimers about potential devastating side effects—you know, like death—as opposed to the sunshine-inducing magic of this or that blue or yellow pill.

But, hold the phone, Mabel! I’ve recently had the unfortunate experience of surveying used-car outlets and it’s still a very ugly picture. Some background: my younger son, who just marked his 18th birthday, has planned for almost a year, upon receiving a driver’s permit, to buy a car, and until last month I’d blocked out his diligent research on websites and periodic bursts of excitement about eventually procuring a—any—working vehicle. My interest in cars is minimal: I haven’t gotten behind the wheel in over a generation, and generally rely on cabs for transportation or, my wife driving our ’98 station wagon. She’s a native Californian, and, as such, a fascination with cars is a given; in addition, she’s an excellent driver and so that’s been lucky for me over the years.

Anyway, the day of reckoning arrived earlier this month, when it was finally time to make good on my promise to help Master Booker in purchasing a set of wheels. Our family motored out to an eerily depressing stretch of road in Baltimore County, the kind of endless highway despoiled by crumbling or boarded-up storefronts, unkempt fast-food joints, the odd crack dealer’s corner, decrepit Bible Study centers and time-forgotten hardware stores. This isn’t peculiar to Maryland, these strip where it’s always midnight: we could’ve been in Brooklyn, L.A., Philly, Chicago, Atlanta or any of hundreds of localities in the zippity-doo-dah Anonymous United States of America.

Booker had scouted a reasonably priced BMW SUV online, and so we arrived at this ramshackle dealership that appeared as if it were at one time an under-performing Taco Bell. My first order of business was hitting the john inside, and it wasn’t encouraging that both toilets—no locks—were busted and there wasn’t a paper towel in sight. Fine, I reasoned, this wasn’t a Four Seasons hotel sort of venture, and amenities weren’t a priority for this particular company. An amiable (if bored) fellow showed us the BMW, gave my son the keys for a test drive and away we went, back on the endless highway for a quick spin.

The car was comfortable enough, but in quick order we found out that two sideboards in the back seat were falling apart and the air conditioning didn’t work. I thought it odd that the nominal boss, who looked like he was about 22, demanded just a $200 deposit to hold the car, and, when I inquired about his “wiggle room” on the price, went into a programmed response about the quality of his merchandise, the insatiable demand, and that maybe, just maybe, he could shave half a grand off the top. Still, it was inexpensive, and for a youngster’s car, we figured it might work, with the proviso that my wife’s trusted mechanic checked it out and gave a thumb’s up.

My son, returning from school the next day wasn’t pleased to hear the report: the electrical system was shot, all four tires needed to be replaced, and… well, a laundry list of malfunctions that were beyond my ken. This set off a bit of domestic disturbance in our normally tranquil household, which I needed about as much as another ginned-up quarterly water bill from cash-starved Baltimore City. (I haven’t the fortitude to launch into a tirade about assessment values for houses in the city; let’s just say the bureaucrats in charge of this scam make those credit default swap de facto crooks look like model financiers.)

Several days later, after much to-and-fro that I tried in vain to avoid, we hit the road again, this time to a recommended dealership in Timonium, and it was a different story. Well, as far as you can endorse used car blights on the landscape. It was sort of like a scene out of Glengarry Glen Ross or Save the Tiger, although better lit, with some 15 men lined up by the door, waiting to get their claws (and potential commission) into the very slow stream of customers. Everyone was polite, in regulation polo shirts and chinos, but I still couldn’t shake the famous poster of Richard Nixon from the 1960s: “Would YOU buy a used car from this man?”

We did find a cobalt blue Jeep Wrangler, pricier than the compromised BMW, but with far fewer miles and everything in working order. A quick spin around the block and we were convinced—maybe out of frustration, maybe because it was a decent and safe car—and then set about going through the paperwork. Which only took three hours… about two more than I’d budgeted for this root canal-like endeavor. It didn’t help that the showroom was freezing—once again, I have to ask my eco-obsessed friends, why is excessive air conditioning, an egregious waste of energy, fully sanctioned while a lapse in recycling warrants at least a rhetorical citizen’s arrest?—and the “business guys,” as our salesman called them, dithered and futzed around on what really was a very straightforward transaction. Finally, Gus or Martin or Luis, I forget the name, ushered us into his financial study, and slowly explained numerous options, almost none of which we had any interest in. Sensing our edginess—which I suppose was exacerbated when, at one moment, I threatened to walk and queer the entire deal—he at last quickened the pace and we were done.

Double good news: my son is thrilled with the Jeep, and, for me, this rite of teenage passage has now been completed. So, in conclusion, I’d say the used car profession is still pretty ratty, but upon reflection I have no reason to question another man’s way to pay the monthly bills.