Worcestershire on the Barbie 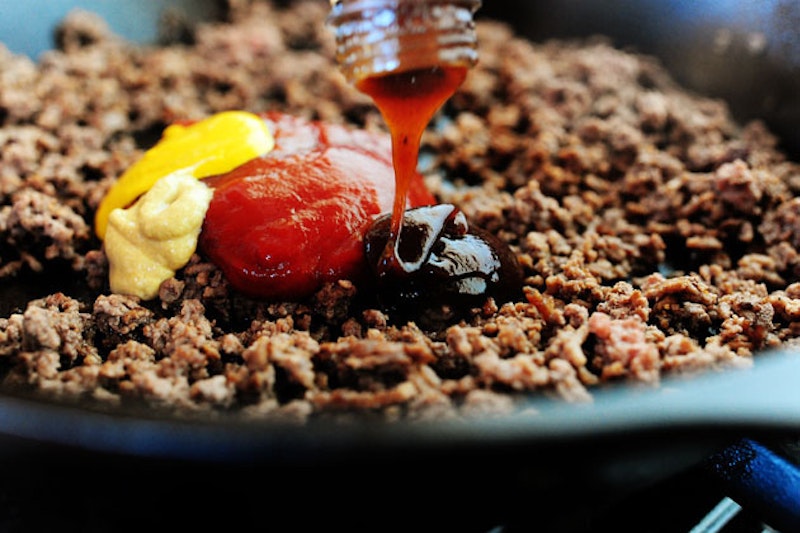 As a shiftless summertime youth, one of my favorite afternoon activities was getting stoned on re-runs while slurping Worcestershire sauce from a small bowl—without dead animal flesh to saturate. The thrill was in the tang, I think, the tartness of the stuff, and since I was alone it felt as though I was getting away with something, though Mom must’ve noticed the quantity in the bottle shrinking little by little, day by day. You’re probably mortified at the thought of how gross this sounds, and you’re not alone; I was a pretty weird kid, come to think of it.

We’ve become minor BBQ sauce connoisseurs since moving down here to Texas, which means that every couple of weeks we spring for a new brand while loading up on groceries. The latest palette teaser is called Texas Redneck, and it’s a weird sauce. And by that I mean that it’s a deep sauce; it’s philosophical. It’s rich, cruel, and downright elemental, with a dark hue and a consistency that hovers in the sadly indeterminate nether region between thick and runny, a place where there’s nothing, like, remarkable about how the stuff pours from the bottle, but in this case it doesn’t really matter.

See, there must be a special, ponderous zang that a lion experiences when it devours an animal it’s never had occasion to consume before, something musky and different and unknowable about a new blood variety that causes the lion to decelerate into slow motion in order to puzzle out the pathogens, subtleties, and mysteries therein. When I drench a chunk of baked chicken or a grilled ham steak in Texas Redneck, I transform into that confused, besotted lion; whatever I’m actually eating is merely window-dressing-qua-substrata for me to attempt to expand my conscious mind’s grasp of Texas Redneck as a gustatory concept. A lot of BBQ sauces ingratiate, flaunting tastes that are the flavor equivalents of DJ scratches—tastes that get out ahead of everything else going on in the recipe to try to win your favor. (Rainforest Café’s sauce, which is epically fruity, is guilty of this, even if the chain’s take on this sauce genre is undeniably fresh.)

Texas Redneck refuses to show its hand right away; this shit doesn’t even register as BBQ sauce in the normal sense, to the extent that it’s like Anchorman: more awesome in retrospect than in practice. A viciously stinging aftertaste whiplashes your palette. In retrospect, it becomes apparent that that whole theoretical basis for Texas Redneck is, seriously, Worcestershire sauce, a betrayal of the unwritten social-sauce contract so foul that it’s possible to come away feeling almost affronted. But let’s be real: after Texas Redneck, it’s not like Sweet Baby Ray’s is gonna cut it anymore.